During my week with it, I tried desperately to figure out how Toyota determined this was the right name for its SUV. Remember those awful Highlander movies? What was the line in those flicks again? “There can be only one!” 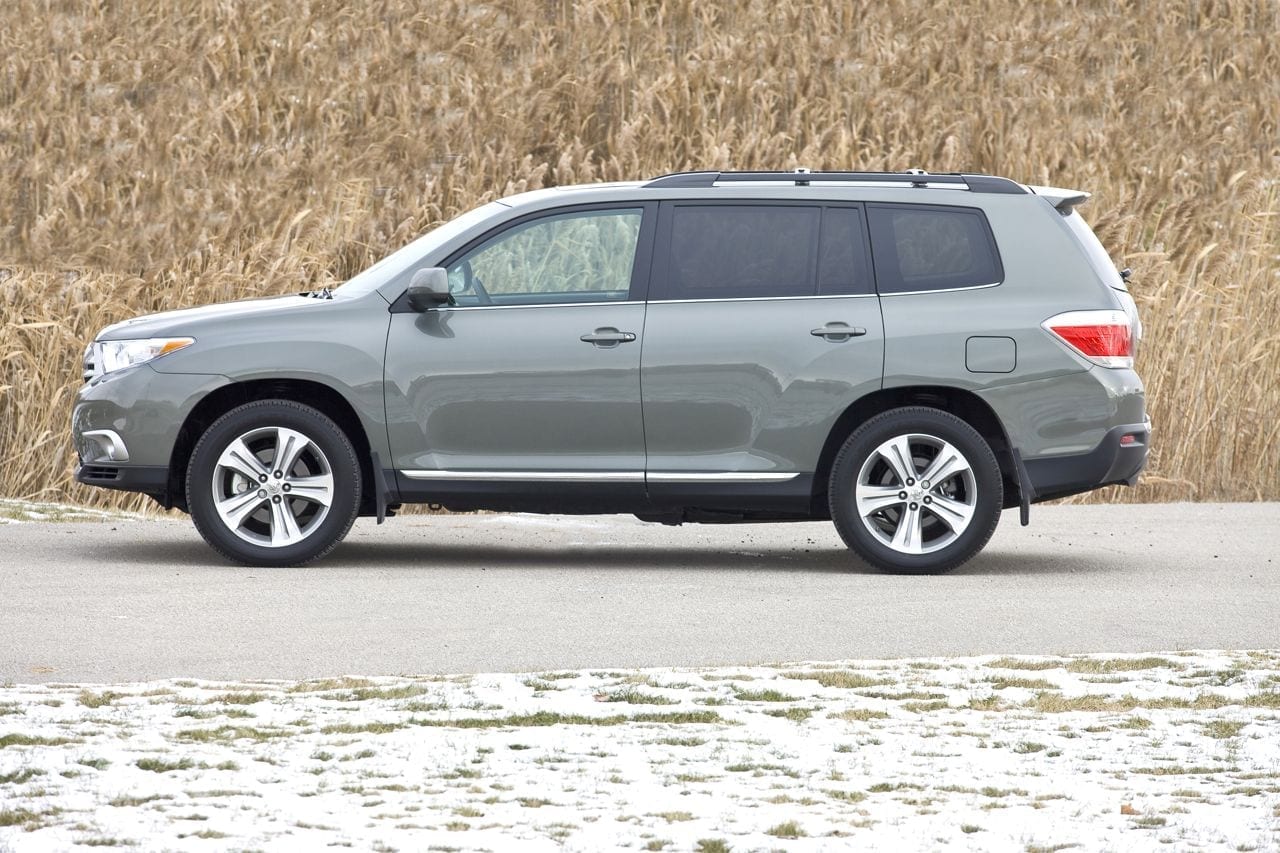 Anyway, the Highlander slots in above the smaller RAV4, somewhere near the truck-based 4Runner, and below the completely ludicrous Sequoia.

I reviewed a relatively base version of the Highlander – the 4WD V6. If you want to spend a few grand less, there’s the 4-cylinder version. If you want more goodies than what I describe here, you’ll need to step up to the Limited. There’s also the Hybrid for those that want to feel better about themselves.

The exterior looked pretty fresh a few years ago when it came out. Although it’s not as tired as some other designs out there, it is getting a bit long in the tooth. The Highlander has a way of blending into the landscape, and looking decent while doing it. It also has a way of surprising you by its size once you get up close – it’s not a small SUV. There’s nothing exciting here – it’s a smooth design and nothing stands out. Slab sides, boxed out fenders, a grille that looks like it’s trying to mean business. A pretty boring shape, all in all. I did like the chunky 245-sized rubber, but the 17” rims don’t look nearly as nice as the 19s on the Limited model.

There are no shocking twists or surprises under the hood either. Toyota’s tried and true 3.5-litre V-6 sits there. The numbers are pretty familiar already. 270 horsepower at 6200 RPM. 248 lb.ft of torque at 4700 RPM.

That power makes its way through a 5-speed automatic (an insulting number of gear ratios these days) and to all four corners via an all-wheel drive system.

The Highlander is surprisingly svelte for this class, tipping the scales at 4178 pounds in this configuration.

Inside, the Highlander seems a bit dated too. The design has aged gracefully, but it’s time for an update.

The materials aren’t great. There isn’t a shred of soft-touch plastic to be found here, short of the armrest lid. The hard dash plastic looks great, texture-wise, but it collects dust like crazy. The whole interior comes across as bland, grey and boring.

Speaking of cheap-feeling materials, the grey fabric seats (power adjustable, not heated) reminded me of rental cars from a long-gone era. They don’t feel expensive or luxurious. They aren’t very comfortable either, and more than one passenger commented on that. The center of the dash houses a comically small screen. It serves as the driver information screen, offering fuel economy information (average, instant, since refueling, range), a clock and outside temperature. The size isn’t as much of an issue for this data, but when the rear-view camera picture comes on the screen, you’ll have a tough time seeing what’s going on behind you. Think of having an old iPod screen in the center of your dash, and you’ll get the idea. Below that is the stereo system. It has a dated dot-matrix display and sounds OK – it feeds off AM, FM, satellite, CD, auxiliary, USB and Bluetooth streaming sources. At the bottom of the center stack is a manual climate control system. The knobs for the stereo and the climate control look strange because they’re the size of a small fist. I’m not sure if I’ve ever seen bigger control knobs in a vehicle.

There are some nice touches. The power liftgate can be controlled from the dash, your key fob or on the liftgate itself. There is a heating element under the windshield wipers – flip that switch if the wipers start icing up.

The second row has three seats, each with a headrest and seatbelt. The outboard seats are as comfortable as the front ones (not very) and the middle one is, for all intents and purposes, useless. Unless you were born with one butt cheek. The seats slide fore and aft and recline. There is an exceptional amount of head and leg room in the second row (I’m 5’10”). You get controls for a rear climate control zone and you can exchange that useless middle seat for a more useful center console, which is stored under the front console. The third row has two seats. My two older kids headed back there – the 5 year-old was fine, but the 9 year-old complained that it felt tight for legroom. Needless to mention, the third row is for short distances or for people you hate. Surprisingly, the headroom is very good in the third row. Storage-wise, the Highlander does fine. There are 4 cupholders in the console, a change bin on the left underside of the dash and a carpeted bin under the armrest. Oh, and the glove compartment is a tub big enough to bathe a baby in. The cargo space with the third row in use is pretty minimal but not useless at 290 litres. Fold that third row flat (the seats split 50/50) and all of a sudden, it’s a 1200 litre space. You could also fold the second row seats down (they split 60/40) using a couple of cool latches in the trunk and host a party in your 2700 litre Highlander room. There is a removable, retractable tonneau cover and I love that you can store it under the trunk floor, where you’ll also find additional storage. A final note on accessing the trunk – the rear window pops open, allowing you to transport long items while keeping the liftgate closed, or you can easily drop stuff in there. A neat little detail.

When it come to the drive, the Highlander fits right into my theory that almost every Toyota does what it can to kill the fun in driving.

Let’s talk about the good stuff first. Although it’s never a quick-feeling vehicle, it has plenty of power off the line, and for everyday driving, the Highlander has enough jam.

The ride is fantastic. It will handle any big hits, including ones off the beaten path. The whole experience is smooth. Smooth and quiet.

The transmission is slick, and does a good job at keeping things completely drama-free. There is a Sport mode, and you can also manually shift it with the gear selector. There’s a Snow mode which I tried and found unbearably sluggish.

Though this might not matter to some shopping for this kind of ride, the steering is number than a tub of novocain, and feels completely dead. The handling is good in terms of the vehicle’s ability to grasp the road, whether its dry, wet or snowy, but there’s a ton of body lean and it is clear the Highlander doesn’t want you to throw it into a curve.

The all-wheel drive, while competent at moving things forward, is front-wheel biased, so it will almost invariably understeer. Now let’s say you want to have some fun and kick out the rear end in the snow. Good luck. When you turn off the traction control, the stability grannies still put their foot down sternly as you slide and put a stop to the fun. And inexplicably, the vehicle turns the traction control back on. After you consciously turned it off. Thanks, Toyota, for pouring water on the fun parade.

If you want to head off the beaten path, the Highlander offers decent ground clearance and a hill descent mode.

Visibility is good – it’s a nice commanding view of the road, but the headrests from both the second and third row get in the way of your rear view.

Nitpicks? I’ve become pretty accustomed to finding heated seats in most vehicles here in Canada. Certainly in those that price out to the tune of 38 grand. I was taken aback not to find them here.

I also feel as though Toyota is trying to milk the most they can out of dated tech and mechanicals before throwing an update our way. A 5-speed automatic? In 2013? Come ON! The only way they could insult us more would be to offer a 4-speed automatic. Oh wait, they do. In the Corolla. Pairing a phone in a Toyota without a touchscreen (such as this one) is done through the hands-free system and takes about 20 steps. It’s probably less painful to put your arm through a meat grinder.

The placement of the trunk lid opener button is terrible – it’s completely blocked by the steering wheel.

So, what’s the verdict? Well, as an appliance, the Toyota Highlander does its job.

It will transport you, your family and whatever you need to bring from point A to point B and there won’t be any drama. It doesn’t look bad, although the styling is beginning to get a bit tired. The interior, in this trim level, feels a bit cheap and dated, although it does most everything you need too. Everything about the driving experience feels numb and detached. If you want to have any kind of fun driving your vehicle, this isn’t the one for you. With that said, many bigger SUVs don’t offer a boatload of driving fun.

WAF (Wife Acceptance Factor) was low. She, the lover of minivans, advised me that it was “boring” to drive. She absolutely hated the small screen for the back-up camera, and she said the Highlander didn’t react the way she expected it to on the road. Smart girl.

The Highlander is a vessel of utility, comfort and space, and offers reliability and excellent resale value. If those things matter, and you don’t need your vehicle to have a soul, you might like it.

In the Highlander movies, there can be only one. Thankfully in the SUV world, there is more than one to choose from. And if you’ve got your heart set on a Highlander, keep in mind that the 2014 Highlander has been revealed and will be available this year.