This hybrid version of the great Honda sedan makes a lot of sense – it’s loaded with tech, an upscale interior and it realizes significantly better fuel economy while remaining a great driver’s car. To be honest, I haven’t been a fan of the Accord for the last couple of generations. I felt as though Honda had lost their way with this model, and something always looked a bit off to me. As if the car didn’t know what it wanted to be. I found the styling to be completely forgettable.

Yes, looks are subjective, but in my opinion, they got it right this time. At very least, it appears that the same team that styled the front and rear ends was also responsible for the sides of the car. The look is congruent, and it’s all new, they have made it recognizable. The front end is adorned with a slightly angled row of LED driving lights, and the headlights are LED projectors. The front grille chrome and headlight glass are tinted slightly blue in the hybrid version. There’s a significant character line – a crease – that angles up from behind the front wheel well toward the back. The wheel wells aren’t flared out much – I like how they’re integrated into the lines.

I found the rear end bulkier than I expected from an Accord, but it looks good. The kink in the rear passenger window line gives the appearance of a very solid rear pillar, and the trunk lid is made narrower to avoid the Kardashian profile.

The LED tail lights are humungous and wrap around, seemingly heading toward the front of the car. The hybrid version also gets a small rear spoiler. The 17″ wheels on this Touring trim, shod with 225/50-sized rubber, have a kind of turbine look to them. While it’s not a particularly exciting car to look at, Honda has made it more upscale, bolder and more substantial. And those are good things.

I like how Honda made the Accord current, even progressive, inside.  The interior is spacious – it feels big enough to be comfortable, yet never too big. Headroom is good for my 5′ 10″ frame. The materials are lovely – there are soft-touch plastics everywhere, with fine textures and contrasting stitching. They’re complemented with an excellent two-tone colour scheme and splashes of brightwork that really work well together. Fit and finish was stellar.

The heated, power-adjustable leather seats (the driver’s side has a 2-position memory) are very comfortable, and offer surprisingly good bolstering for this class of car. The dash is relatively short, and you get the impression that you’re involved in the drive from the get-go. In front of you, the steering wheel has controls for the cruise, media, phone/handsfree operations and the big screen, which I’ll talk about later. The instrument bin houses a floating-needle speedometer (with a round driver information screen in the middle), flanked by digital gauges for fuel, battery level and power/charge activity.

The center stack uses Honda’s new trick – two screens. TWO! At the top, set into a deeper bin, is a large screen – it handles vehicle information, car settings, navigation, media, phone and back-up camera functions. Below that sits a smaller pop-out screen. It functions as a touch-screen, and it can give you more/different information regarding what’s going on on the big screen above, and it can give you access to buttons, contextually related to what’s happening on the big screen. Below the smaller screen is a dual-zone automatic climate control system and finally Honda’s somewhat confusing joysticky, rotary-knob button input – it’s another way to manipulate and navigate the big screen, along with some hard buttons for quickly accessing some of the core functions, like navigation, etc.

This all sounds confusing, and to be honest, it was at first. It takes a couple of days to adjust to the user interface, but I ended up loving that the dash was cleaned up, and that whatever buttons I needed were presented to me on the small touchscreen. A pretty cool concept in theory, and after a bit of adjusting, in practice as well. I don’t think it’s for everyone though – my retired and completely non-tech-savvy parents immediately turned their noses up at the system. In terms of driver assistance tech, the Accord comes pretty well-equipped. You have forward collision warning and lane departure warning systems. A brand-new innovation, which I found more useful than I thought I would, is the funky LaneWatch blind-spot display. Display, you say? Yep. There’s a small camera in the passenger side-view mirror. When you signal to the right, the upper screen displays what is beside you, and augments that view with warning markings that show what vehicles are in a potentially dangerous position. It really does replace shoulder checking after a while. You can also manually turn on the camera if you want to. Great party trick!

Oh and I think the cupholders deserve extra recognition for being square – thank you, Honda, from us small-chocolate-milk-carton drinkers.

Here you’ll find three seats, each with a headrest and a seatbelt. The two outboard seats are very comfortable (and heated), and the headroom and legroom are all impressive. The center position is unsurprisingly narrow, with a harder, raised seat surface. It’s fine to relegate your kids that don’t know any better to it, but any adult forced to sit there for long will want to punch you in the neck. The doors open wide, and access is easy – that’s nice for passengers as well as parents that have to get kids back there. Speaking of kids’ seats, we had two of them back there (you get two sets of LATCH anchors) and we threw in our third kid for good measure. They thought it was roomy and spacious. Nothing else going back there, except for adjustable air vents. The trunk loses a bit of its space thanks to the hybrid battery but it’s still useful for most things at 348 litres, and we got a solid week’s worth of groceries in there without a problem. The real story with this model is the hybrid drivetrain of course. Honda uses a 2.0-litre 4-cylinder coupled with an electric motor – together, they can come up with 196 net horsepower.

The Accord’s power heads through what Honda calls an e-CVT and on to the front wheels. But don’t let that fool you – there’s no transmission to be found, but rather a couple of electric motors working in concert to control the torque. The point of the entire exercise is fuel efficiency. The Accord Hybrid is rated at a shocking 3.7 L/100 km (64 US mpg) in the city and 4.0 L/100 km (59 US mpg) on the highway. I had it during a week of particularly cold weather, and while pushing its way through ice, snow and arctic temperatures and not being driven economically at all, it managed to average an 6.1 L/100 km (39 US mpg) – nearly twice the fuel efficiency I saw while driving the V6-powered Honda Accord.

During most driving situations, the Accord Hybrid feels quite powerful. At higher speeds, it takes a couple of seconds for the drivetrain to find the ideal RPMs when you step on it – it feels no different from typical CVT-equipped vehicles. The car typically starts off on electric power – the gas engine’s auto start/stop feature is basically imperceptible and the vehicle’s operation is smooth, smooth, smooth. I thought the novel approach to replacing a transmission was good, for the most part. Occasionally it would send the engine RPMs soaring even while cruising at slower speeds – this wouldn’t affect the driving at all so I’m wondering if it did that to give the battery an extra boost.

The Accord’s brakes are mushy and grabby as one expects on a hybrid, but these were perhaps more so than the average hybrid I’ve driven and in my opinion the least enjoyable part of the driving experience for this car.

The ride is very well sorted out. I’d call it sporty luxurious – there’s a firmness to it, but it certainly leans toward comfort. It soaked up anything our crappy winter roads threw at it, and still offered excellent handling. Turn-in is surprisingly quick for a car in this class, and I found the Accord very competent when I picked up the pace.

I appreciated that the car doesn’t feel particularly heavy – it weighs in at 1636 kg (3606 pounds) – which is not even 50 pounds heavier than the V6 Accord. It’s heavy enough to feel planted but not so much that it feels like a porker.

There is an EV mode, allowing the frugal, light-footed driver to move under electric power exclusively – if there’s enough battery charge. There is also an ECON button, which makes the vehicle unbearably sluggish in other Honda applications. Interestingly, I found this mode to be very drivable in the Accord Hybrid.

For the money, the Honda Accord hybrid offers you a lot. You can get into it for significantly less (the very-well equipped base hybrid is $29,950), but by today’s standards, this fully-loaded Touring model isn’t priced out of the world. Considering the amount of luxury, cabin and driver assistance technology and performance you’re getting, I think it’s very competitive and I give the Accord Hybrid an 8 out of 10. WAF (Wife Acceptance Factor) was very high. She loved the styling and she loved the interior. She appreciated everything about how it drove, and how “smooth” everything felt but found the dual screens a bit confusing.

Though it’s likely that the hybrid Accord will remain a niche player at this point, the car is highly relevant for Honda since it brings their hybrid technology to another model. Interestingly, one local dealership I talked to is only getting two of them. I’m not sure if this is due to lack of supply or a predicted lack of sales.

I wouldn’t hesitate to recommend the Accord Hybrid. It offers plenty – savings at the pump, in the styling department, inside the cabin and on the road. Reliability is likely to be high, and resale value should hold strong. 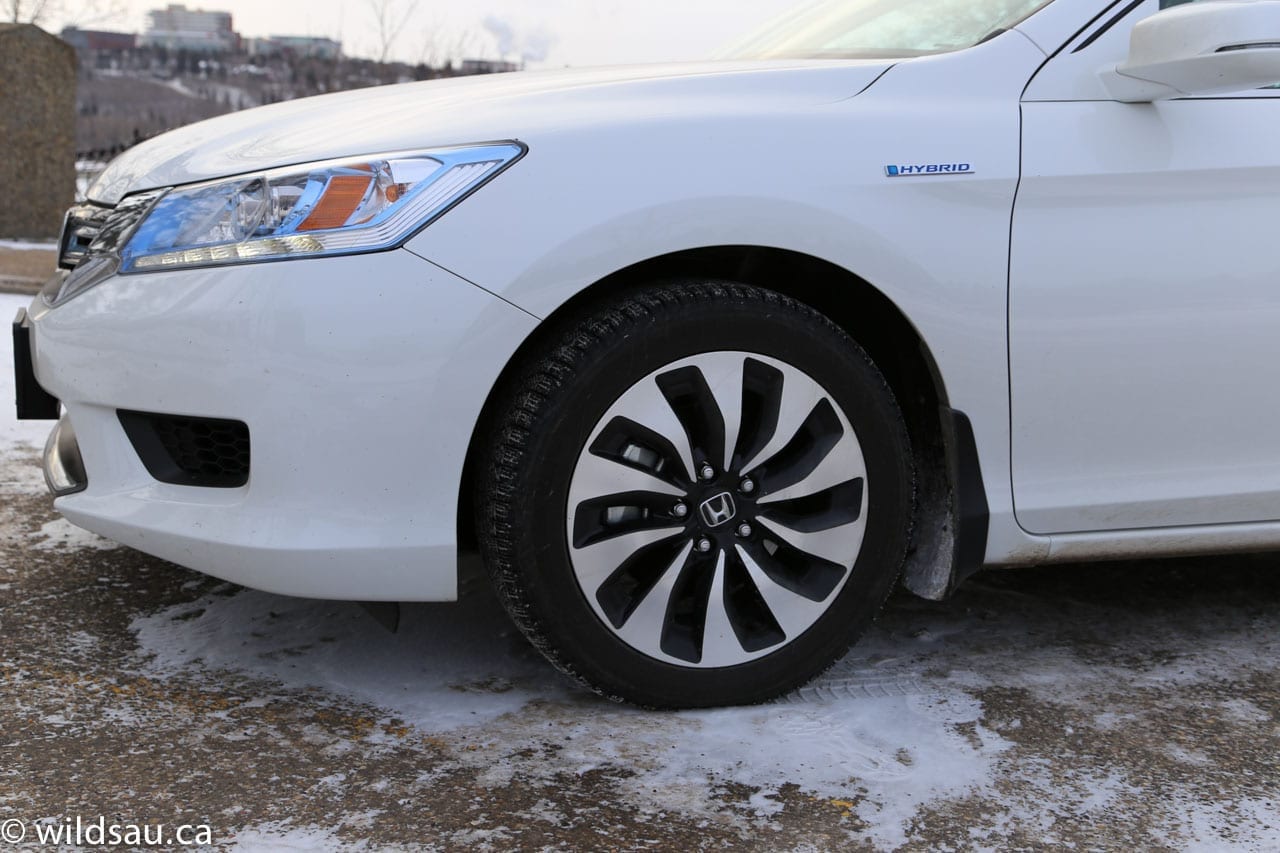 The Honda Accord is, once again, a serious contender. And now, with this hybrid version, Honda has a version that will appeal to hypermilers as well as those who are simply after better fuel economy on a daily basis. The fact that it costs essentially the same as the gas-powered version makes it that much more appealing. Yes, some of the hybrid competition is arguably nicer to look at but the Accord’s price is right in line. 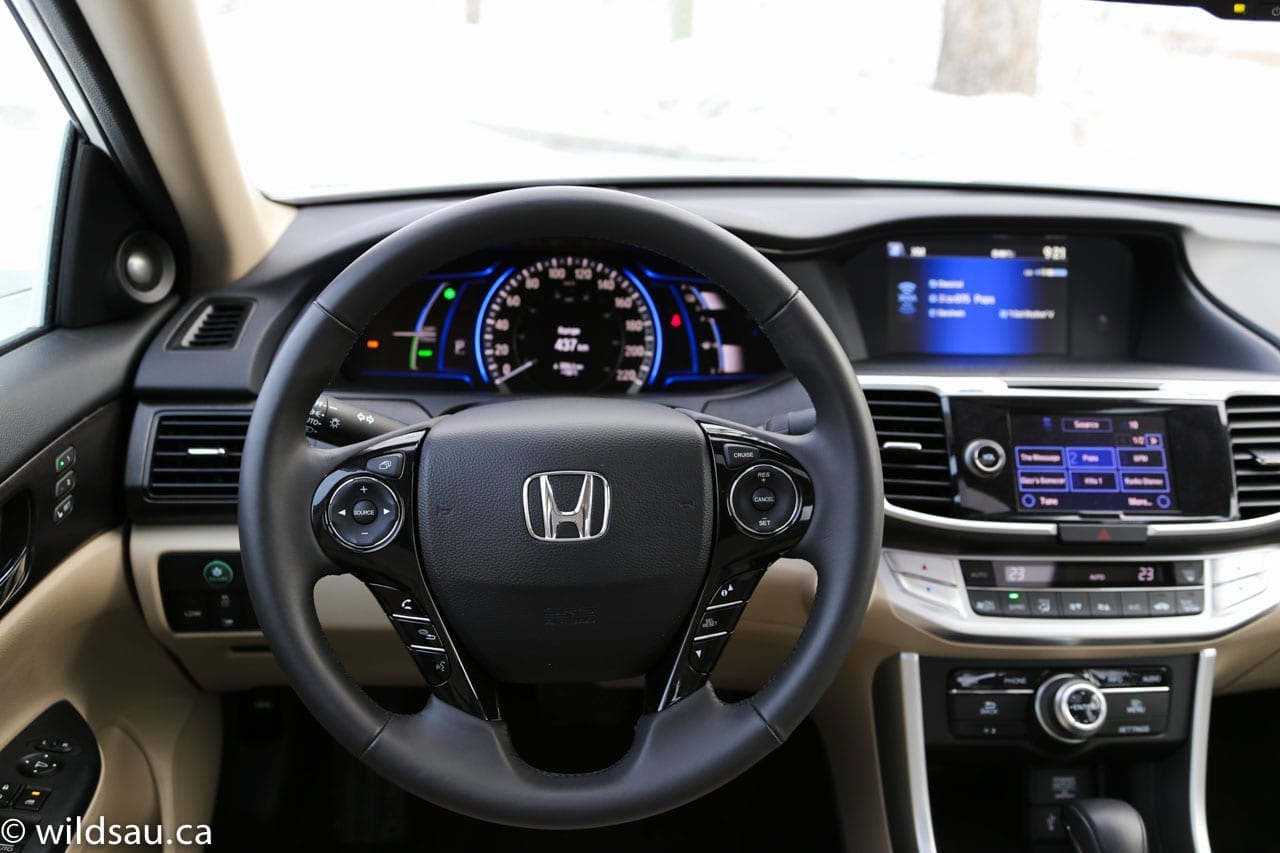