There are other things the Ram marketing team will trumpet, including the fact that they are apparently the longest-lasting trucks on Canadian roads. But that first statement is what had me excited to review this thing. Because when it comes to half-ton pickup trucks, marketing teams have never used fuel-efficiency as a tactic. Until now… What can I say about the Ram’s styling that hasn’t been said already? I’ve noted in my previous Ram review that the mini-big-rig styling that set it apart in the first place and continues to make it the most recognizable truck on the road today has definitely run its course. It’s time for something new, in my opinion. But it still looks bold, and it has evolved as time has marched by. The aggressive forward-leaning grille is gaping, and the overall stance still says macho man – it puts forth quite a presence on the road. But it’s become so common-place it doesn’t really jump out at you anymore. The monstrous 20-inch rims wear 275/60-sized boots and look great. And the rear end is nicely finished by integrating the exhaust tips into the bumper. Unfortunately the right exhaust was chronically misaligned in its little fairing – little things like that drive me crazy.

The Ram has received plenty of kudos for its newest interior and once you step up into the cabin, it’s tough to argue. I found a nicely appointed interior, covered with oodles of soft-touch plastics and even a stitched dash. One sore spot was the terrible fake wood trim – thankfully it’s not very intrusive. And of note, apparently the top-line Laramie Longhorn trim has some amazing real word trim. The leather bucket seats also get handsome contrasting stitching – these thrones are heated and cooled, and I found them very comfortable. Surprisingly, they’re even well-bolstered for a truck. 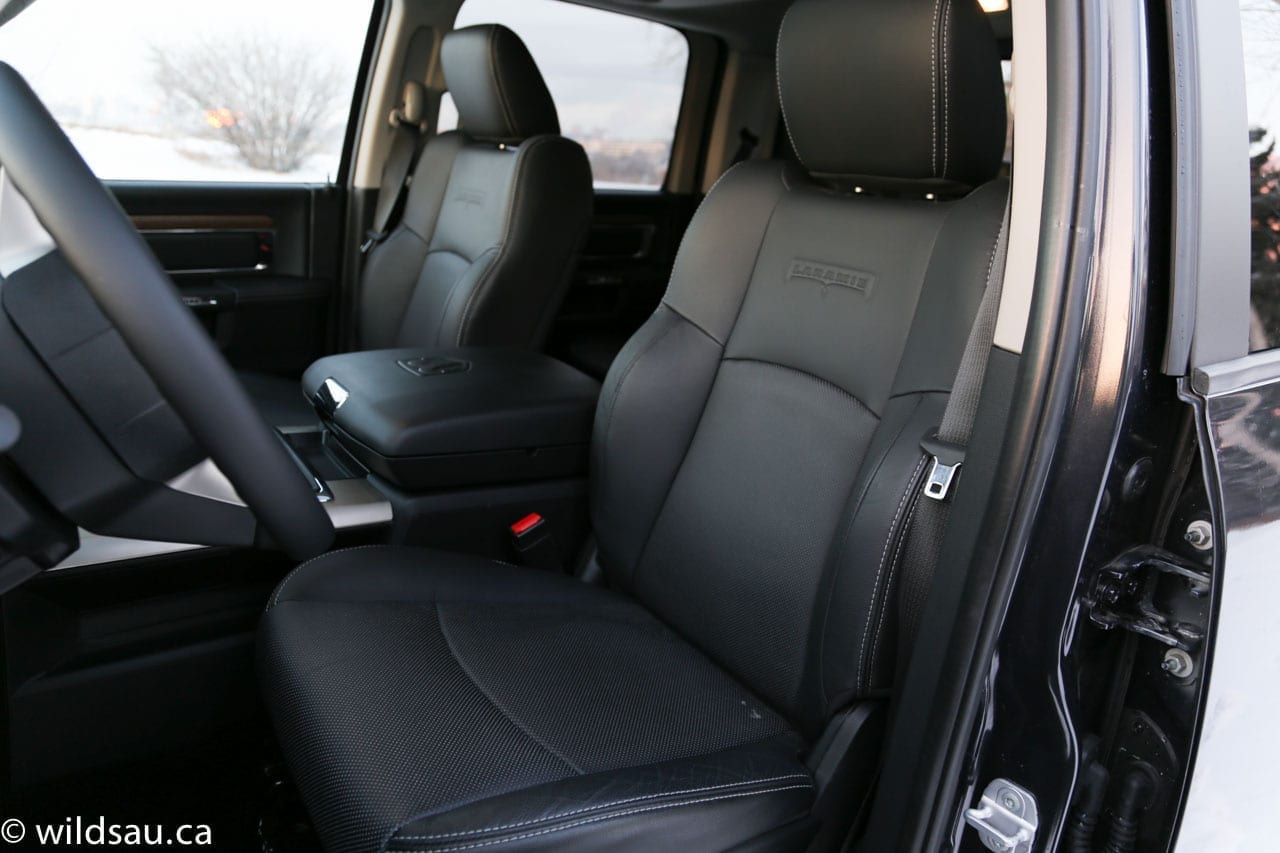 The heated steering wheel sits in front of a set of typical gauges with a sharp colour driver information screen that is well laid out and very useful. The dash is home to the now well-known uConnect system – here it comes in an 8.4-inch square touchscreen configuration that is simply great. The screen is responsive and easy to read, the layout is well designed and the user interface is, for the most part, friendly and intuitive. It manages all the phone, audio, navigation and even climate functions. The 10-speaker sound system is excellent and there are also some hard buttons and knobs to control the dual-zone automatic climate control. I loved that the dash has a 115V household plug as well as a 12V plug.

There’s a standard-sized tilt-slide sunroof too. You’ll find three seats in the back – they’re heated, pretty comfortable and offer plenty of leg and head room. There’s definitely enough space for three adults. There are four cupholders in total – dual cupholders on the floor in the middle, and the middle seatback is an armrest that folds down and has two cupholders in it. Rear passengers also get a 12V plug for charging items. You can get some airflow going back there too, thanks to the powered rear sliding window, which is controlled at the front dash. Our three kids fit back there with room to spare. If you need to get boosters or infant seats in the back, there are two sets of LATCH connectors for them and a ton of room to move which makes getting your little people in the back an easy task.

There’s a ton of space around the cabin for stuff. The Ram has two glove compartments – an upper one and a lower one. The wide armrest lid opens up to two levels – the upper level is a handy organizer with additional 12V plugs, 2 USB plugs and a rubberized tray and then there’s a huge open compartment below it.

I really enjoyed an innovation in the reat seating area. The rear seat cushions fold up and out of the way (they split 60/40), exposing a solid flap – you fold the flap down to make a nice flat load floor to create a massive space to transport things back there. Pretty slick.

Another innovation can be found in the upper parts of the truck box sides. It’s the optional RamBox – which give you two large, drainable, illuminated and lockable storage compartments. Ram says each will hold a full golf bag, but I think that’s a bit rich. Certainly a number of soft bags or a few power tools though. The option also includes a cargo bed extender/divider which lets you customize the cargo bed area and extend the usable bed length. As convenient and useful as these things are, the pricing is absolutely ridiculous. I mean, come on! Other than the sunroof, the air suspension and the diesel engine upgrades, at $1200, it’s the most expensive option. I guess Ram knows they’ve got a good thing and they’re charging full pop for it. Yay for capitalism. Here’s the real news. The new Fiat-sourced 3.0-litre V6 EcoDiesel. Yes, it’s made some waves. And yes, it’s for good reason. Horsepower output doesn’t sound impressive at 240, but it’s really inconsequential since torque is what matters to us North Americans anyway.  And it’s got plenty of that – prodigious amounts of it, actually. 420 lb.ft of it, to be exact.  A modern touch comes with the TorqueFlite 8-speed automatic and of course there’s an electronic shift-on-demand 4×4 transfer case. “Green Car Journal editors consider all truck models in the North American market, weighing environmental attributes alongside traditional touchstones that define what makes a great pickup, such as functionality, versatility, safety, value and style. The winner was selected from five finalists by a Green Truck of the Year jury, comprised of automotive experts and Green Car Journal staff.” So there you have it. So the EcoDiesel does well in terms of fuel usage but how does it perform? Well, it starts quickly and reliably. Even when left outside overnight in winter conditions. A number of people expressed concern over this – rest assured, diesel technology and the associated glow-plugging has come a long way in the last 20 years and diesels are happy to start in the cold though they do need to be plugged in in extreme conditions. It takes off fine and feels perfectly normal in nearly any driving situation. One exception is when you really step on it off the line – there is considerable lag before the diesel spools up, and then it presents its power. Overall, the amount of jam it has is plenty but the power is never as immediate as current-generation V8-powered trucks. The diesel has a bit of rattle to it, especially on colder mornings, but nothing that’s intrusive and certainly nothing like the diesel trucks of yesteryear. The rotary gear selector sits up on the centre stack and works well (not to mention it frees up real estate on the console) – but the knurled plastic knob felt cheap in my fingers. I’ve been quite critical of the Fiat/Chrysler 8-speed in the past, however it seemed more sorted out in this application than any other I’ve driven to date. For the most part, it seemed to be in the right gear and reacted quickly enough to be satisfying. Unique to Ram is the 4-corner adjustable air suspension, allowing you to lower truck for easier entry or exit, set it at normal ride height, or call for extra clearance when you head off-road. As I mentioned earlier, the vehicle intelligently lowers itself at highway speeds to aid aerodynamics. Does it suddenly become slipperier? No, but lowering a truck an inch at highway speeds does make a difference in drag and therefore fuel consumption. Everyday ride comfort  is good and smoother than most trucks, almost sneaking into car-like ride territory. The handling is reasonable for a truck – it’s not skidpad champ, of course, but it feels more sure-footed and balanced than a typical truck does.

The Ram’s drive mode can be switched between 2×4, automatic 4×4, full-time 4×4 and low-range 4×4 with simple push buttons. The automatic 4×4 mode works well in snowy, slippery conditions, quickly activating to spread the power to all four corners and get you moving. If you’re towing, you’ll be happy to know the transmission has a tow/haul mode. The Ram is equipped (in this case) with trailer brake control, a hitch receiver and all you need to hook up and it will schlepp a maximum of 8950 pounds (4060 kg) around. I did not test the towing capabilities.

The Ram got a lot of appreciative stares, especially from the multitudes of Hemi-equipped Ram owners stopped next to me at red lights and gazed longingly at the big EcoDiesel badge.

WAF (Wife Acceptance Factor) was high on the ride and driving position, as well as the space and comfort inside, but she hated the size of the truck and parking it was dismal for her. There’s no question that the Ram takes certain parts of trucking to the next level. The EcoDiesel, the 8-speed transmission and the air suspension really are the future, and make offerings from other manufacturers seem behind the curve. The interior on this trim level is fantastic, and the looks of the Ram (subjective, as all trucks are in one way or another) are still ruggedly handsome. The issue, as with the competitors, is that you have to pay for all this stuff. And if you check all the boxes that my review truck had, it’ll cost you over 70 grand – before taxes. In its defense, you can load up all the competitors’ trucks to stratospheric pricing levels too. It’s up to you to decide whether it’s worth it to you, and whether the Ram is the right choice for you. I’d be happy to own one – if you’ll pick up the tab.

If you’re interested in the competition from GM, click here for my review on two of their newest offerings. There’s also an all-aluminum F150 coming from Ford, which will offer a new 2.7-litre V6 EcoBoost engine.