The Toyota Prius C is the cheapest hybrid you can buy. Obviously something’s gotta give at the low end of the price spectrum, but I was surprised at how much I actually got. The Prius C is a simple 5-d00r hatchback. It got a few upgrades this year, including a revised front end (replacing the somewhat goofy happy face on the previous one) with new LED headlights, LED foglights and a set of new LED tail lights. LEDs for everyone! The C is different enough to stand out and grab a few eyeballs when it’s driving around, and the choice of retina-blasting colours helps it get noticed too. I’m a fan of hatchbacks, and I found the styling inoffensive. It’s not for everyone, but neither is a hatchback. It’s difficult to tell there’s anything different about the C from the side – it’s looks quite conventional. I found that the overall styling is in line with Toyota’s Yaris and there are even cues from the new Camry. It’s good to see Toyota adding some more interesting and youthful styling and moving toward slightly less conservative shapes.

The significant rear spoiler sure caught my eye, but the C’s tiny 15-inch rims make it clear that this might not be the sportiest ride. And that’s just fine. Inside, the comfortable and spacious cabin feels open and plenty big enough with good head room up front. There are a lot of things going on with the dash styling. I found the multitude of intersecting angles and panels a bit confusing and there are hard plastics everywhere. At least Toyota put some effort into giving them some different textures to liven things up and they even throw in a few gloss black panels to class it up a bit. So yeah, it’s not ugly, it’s just a tad busy. Overall though, I never got an entry-level impression from the little C. And that’s pretty cool. Fit and finish seems to be OK but I did hear an occasional plastic-on-plastic rattle when I hit big bumps or potholes.

I was a bit surprised to find that this little car (in this trim) is actually very well equipped. Everything is powered (locks, windows, mirrors and tilt/slide sunroof), you have an automatic climate control system and the 6.1-inch touchscreen even has a navigation system and voice recognition. That screen also manages your media (feeding off a plethora of sources including terrestrial and satellite radio, CD, USB, auxiliary and Bluetooth streaming audio) and phone functions, and it displays a wealth of fuel economy information too. Hey, there’s even a backup camera! The heated front seats are upholstered in SofTex, and I found them quite comfortable, although they could be a little more bolstered for cornering. But hey, that’s not what the Prius is all about.

Other nice little touches include keyless entry, a push-start ignition and cruise control. The digital gauges are found close to the dash’s centre under an eyebrow and there’s a fantastic driver information screen there with a ton of hybrid-related displays. I’m a nerd for stuff like that. I found out that I ended up driving in pure electric vehicle (EV) mode for 35% of the time I had the car. That’s a lot of fuel saved. While the back does feature three seats, each with a headrest and a seat belt, it’s narrow and you’ll have a tough time making the middle seat work for adults. But the floor is flat and that does help make things more comfortable. The leg room is more than adequate – at 5’10”, I could sit in the back with no issues. Head room is acceptable, and with the overhead divot, I had enough room too. And on top of everything, I found the rear seats quite comfortable.

My three kids did fit back there and were actually fine for space. There are two sets of LATCH anchors for child seats.

I always love how well smaller vehicles do with the storage aspect. You’ll find little drop-in bins around the cabin to stash your small items. There’s an open shelf above the glove compartment (where you’ll find the USB and auxiliary connections), a large open space at the front of the centre console with a 12v plug above it and a tiny bin under the armrest lid. 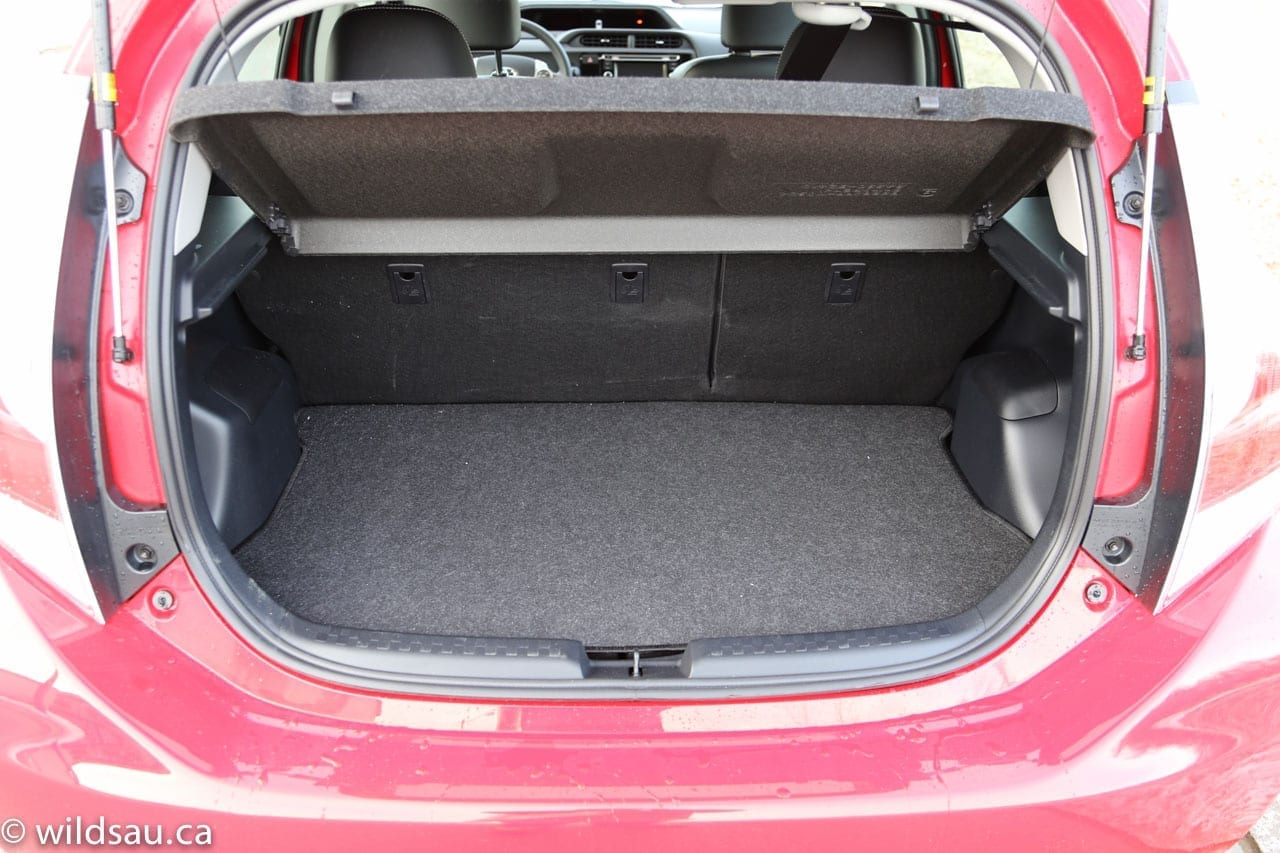 The cargo space is surprisingly big at 484 litres. You can fold the seats down (but not flat) in a 60/40 split, but Toyota doesn’t tell us how much the trunk space grows when you do that. There’s a hard tonneau cover/parcel shelf as well, which keeps your stuff away from prying eyes.

The Prius C’s performance isn’t very impressive on paper with its diminutive 1.5-litre 4-cylinder. Combined with the electric motor, the net horsepower is rated at 99. It drives the front-wheels through a CVT (continuously-variable transmission). 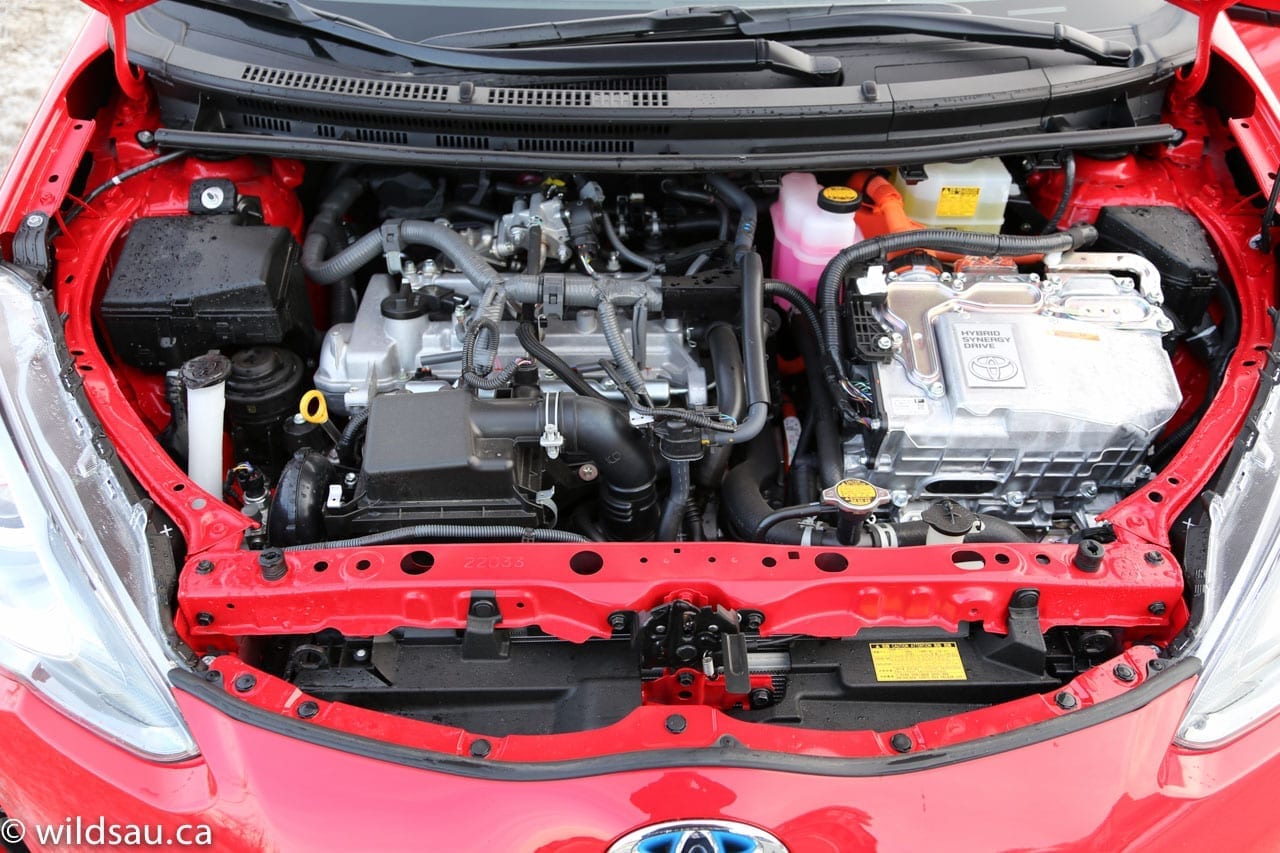 I found the Prius C to be adept enough for an urban car. Under hybrid power, it has enough jump off the line but it never actually feels powerful. Well, it’s not. That’s not the point. But around town, I was always fine. I found the car to be surprisingly quiet around town too, unless you really step on it and that little engine winds up. Once you get on the freeway or the highway, acceleration is definitely strained. Yes, it gets up to highway speeds. Yes, it maintains them. And yes, it can even pass. But this isn’t where the car is comfortable. It gets noisy (especially from the engine bay and a bit from the wind too) and a bit nervous-feeling and floaty at higher speeds. It’s happiest cruising around town, where it’s easy to park and to drive.

I found the ride to be a bit truckish over bigger hits and I sure heard them in the cabin, but it is a smooth operator on normal roads. Handling is so-so. The car is predictable and as you’d expect, it does fine around the city, but the skinny 175/65-sized tires lose traction quickly and it understeers almost immediately when you pick up the pace. Add in the significant body lean and things feel a bit squishy. The regenerative hybrid brakes were less grabby than an other Prius’ I’ve reviewed, and were easy to live with. Visibility is decent, but shoulder checking becomes a bit intense thanks to those large rear pillars.

There are three drive modes – normal, Eco (which makes things incredibly lethargic), and EV which uses only electric power – that only lasts for short distances at very low speeds. I found the car did well in normal mode, and still returned amazing fuel economy. I’m not sure I’d toy around with the other modes. If you’re after a perfectly capable urban run-about, and you’re looking to use as little fuel as possible, the Prius C could be the answer for you. It’s comfortable, highly efficient and you can even load it up nicely, as my Technology trim review car proves. It’s not a road-trip warrior, to be sure, but that’s not to say it’s not a decent highway car as well. And finally, Toyota did a bang-up job with the packaging, managing to fit the gas tank and battery under the rear seat, which allows for a very respectable trunk and good rear seat room. This price point would be a bit more attractive if provincial and federal governments offered a reasonable rebate for buying hybrids, but there’s no reason you couldn’t earn back your investment (over a traditional gas-powered subcompact) in a few years considering the incredible mileage this car can get. WAF (Wife Acceptance Factor) was decent. She found it very easy to drive and to park and she thought it looked “really cute”. I think it’s a bit small for her liking, but overall, she didn’t have many nitpicks at all.