I’ve reviewed Yarises (or is it Yarii?) in the past. They are definitely entry-level vehicles. Good ones, but entry-level nevertheless. I’m not sure what all Toyota has done to the all-new sedan, but everything about this car somehow feels less basic and less entry-level than the Yaris hatchbacks I’ve reviewed. Frankly it feels more polished and refined than an $18,000 vehicle has any right to. I think Toyota got a little over-excited when they said it’s “aggressively styled” and that it has a “striking profile that stands out from the crowd”. But with that said, the styling is well-done and I think it looks nice from nearly every angle. The front fascia does have an air of aggression (kind of like an angry guppy), and looks spicy with its lower hexagon grille and sharp headlight pods. Obviously the most distinctive feature will be the trunk which we haven’t seen on a Yaris in Canada before. Even the base unit that I reviewed, with its 16-inch steel wheels and wheel covers, looks complete. Toyota did a good job at giving it a pleasing design. The Yaris sedan’s interior, while spartan in some ways, still comes across as well-equipped and nicely designed – I appreciate the effort that went into the styling that really does set this apart from many other sub-$20,000 cars. Sure, hard plastics are everywhere, save some stitched upholstering on the dash and some soft padding on the doors, but everything feels well put together. As is often the case in small cars, the interior comes across as quite spacious –  in front, at 5’10”, I have about 4-5 inches of head room to spare and that makes things roomier than I expected. That well-equipped part? Well, the mirrors, door locks and windows are powered, and even the base Yaris gets cruise control, a push-start ignition and keyless entry. Nice! Those fabric seats are comfortable and nicely bolstered, although the bottom cushion felt a big springy to me at times. Where you often find a screen tacked onto the top of the dash nowadays, the base sedan has what I’d call a head unit. It still sticks up/out but has only a text-based screen, some hard buttons and a knob – all of which control your sound system. I wasn’t a huge fan of this, as it was a bit of a reach for me. Thankfully, many of the controls are replicated on the steering wheel. There’s a basic manual climate control system. I have to say, when I review lower-end cars, I expect the fan to be deafening at higher speeds – not so in the Yaris. Even at its highest setting, the sound level was totally acceptable. There are three seats in back. Typical for a small sedan, the rear leg room is quite limited – my knees were a bit cramped. In addition, there’s a bit of a centre tunnel and with the console coming back quite far, you can basically write off the middle seating position for adults – even our kids said it felt small back there with all three of them packed in. Thankfully head room is OK –  I had a couple of inches to spare. The space “issue” isn’t really knock against the Yaris – you won’t find much more space in any of the competitors.

Cabin storage always matters to me, and it becomes more important the smaller the car is. The Yaris does quite well. You get a decent glove box, a nice-sized rubberized drop-in bin at the front of the console (where you’ll also find the stereo’s USB and auxiliary inputs and a 12V power plug) and a series of additional little bins and cupholders in the middle and back of the console as well. The sedan’s 382 litre trunk is big enough to be useful – I did a major grocery run with it – and the rear seats fold down in a 60/40 split if you need to add some cargo space. No, the Yaris is not a fast car. But you will immediately note that the feather-weight 2416 lb (1096 kg) sedan is surprisingly responsive around town, especially when it’s in Sport mode which “boosts torque” – don’t ask me how that works. The game-changer here is the new 6-speed automatic transmission – it’s incredibly smooth with imperceptible shifts. If you want to shift manually, you can do so with the gear selector. The car continues to impress once you get on your way and you notice that the ride is very refined and remarkably quiet for this vehicle class. I was even impressed with the Yaris sedan’s handling – it felt dynamic and agile around the city and it even stays quite flat around corners. For me, the fly in the Yaris’ handling ointment is the terribly numb steering that feels almost detached on centre but considering this car isn’t going to the race track on most days, that won’t bother many drivers. All in all, Toyota managed to strike a fine balance between a great ride and sporty handling for a small sedan. 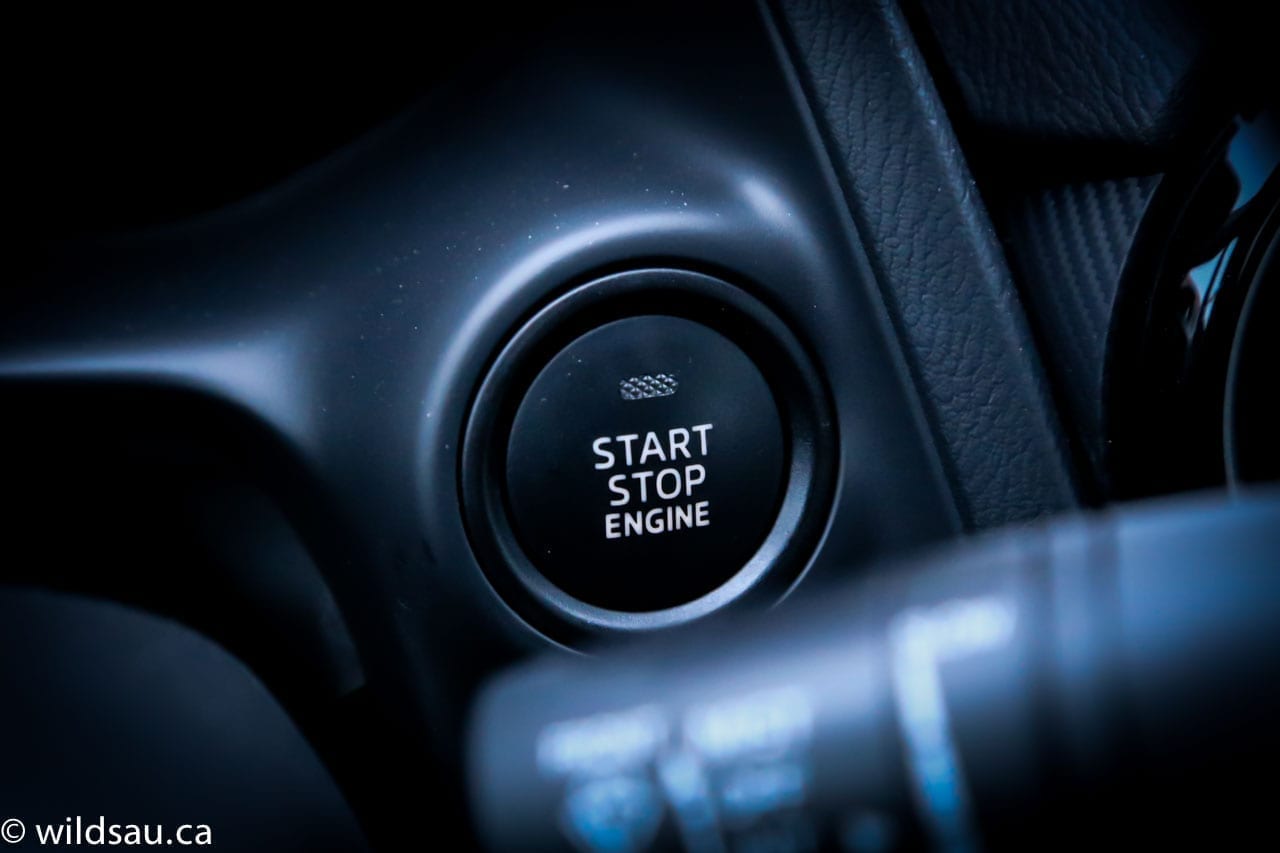 The car felt stable at highway speeds – we experienced some wind and road noise but for this category, I thought the car is very well insulated for noise. And its small size makes for easy-peasy parking and low-speed maneuverability. An excellent city runabout. The Yaris sedan comes well-equipped (though heated seats, a back-up camera and a 7-inch touchscreen system can all be added courtesy of the optional Premium trim). Its highly rigid structure gives it an air of refinement and as I mentioned earlier, this little car feels more solid and sophisticated than its price suggests. WAF (Wife Acceptance Factor) was somewhere in the middle. She was duly impressed by the ride and said it definitely feels and drives like a much more expensive car, but she wasn’t a big fan of the exterior styling. My wife is a wagon/hatchback girl though.

If you’re in the market for a small, base sedan, the Yaris brings more to the table than you’d expect at this price. It was one of the biggest surprises for me so far this year. In a good way.