A mostly-great car that’s mostly great at most things. 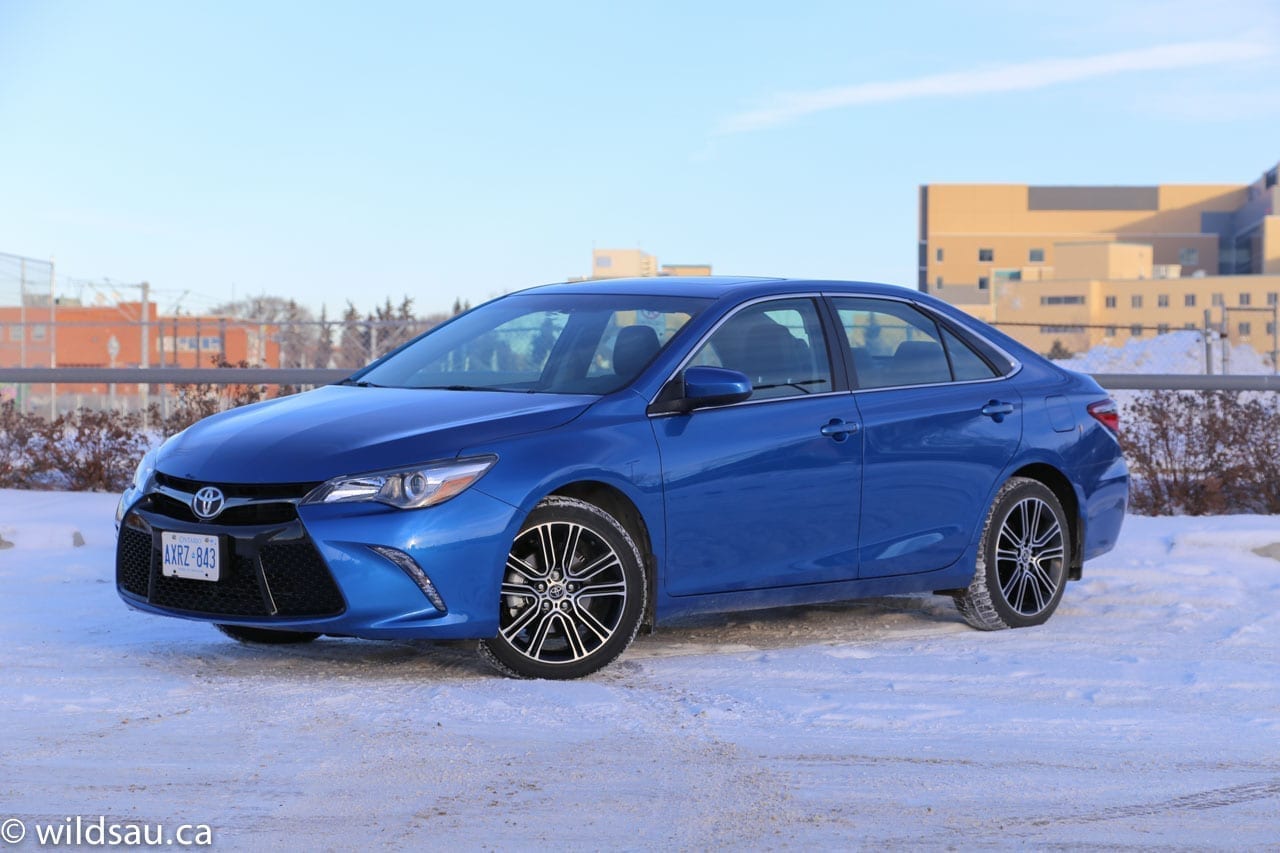 The Camry is known as a perennial bastion of practicality and reliability, and traditionally has always cut the mustard as the smart, if not a bit drab, purchase. The latest generation of Camry has brought a fresh set of lines and a sense of newfound confidence. While the Camry still isn’t something that will overly excite the senses, it has become easier on the eyes and it is a very pleasing, competitive and competent car. My review vehicle was the SE trim, but this was no ordinary SE, my friends. This was an SE Special Edition. For taking the SE plunge, you’re rewarded with an SE-specific bolder-than-expected front end (with its fairly dramatic “Sport Style” grille treatment) and a rear spoiler. The Special Edition adds a couple of new colour choices – mine came in the striking Blue Streak Metallic. And so you don’t get confused with the plebes scooting around in non-Special SEs, there is a “Special Edition” badge on the rear end. 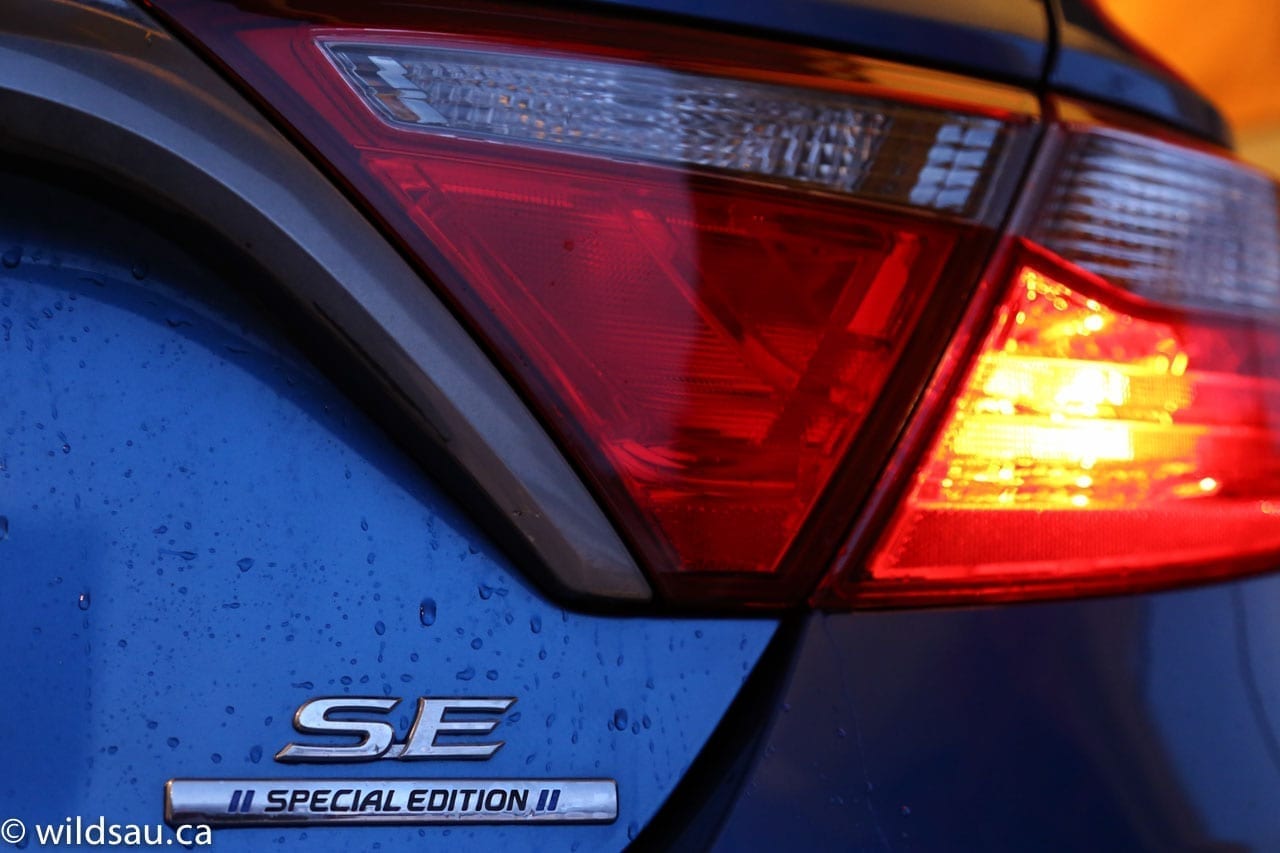 The Special Edition’s 18-inch aluminum wheels are stunning in my opinion, and are wrapped with meaty 225/45-sized rubber. It all comes together to give this Camry a surprisingly confident stance. The one thing that threw me off a bit was the fake rear quarter window, but I got over it. Camrys are known for comfort, and the 2016’s spacious cabin is no exception. Toyota’s materials are nice, with a mix of soft-touch and hard plastics and fit and finish is excellent. The interior styling is inoffensive and works pretty well.

The SE-specific “sport fabric” seats are augmented in the Special Edition and come in a cool two-tone black and blue scheme. They are comfortable and quite well bolstered. The driver’s seat is power-adjustable, but neither of them is heated. Aluminum scuff plates on the door sills are SE stuff, but the blue stitching on the dash and gear selector boot, two-tone blue stitching on the seats and the cool blue-on-white instruments are all Special Edition exclusives. Front and centre in the dash is a 6.1-inch touchscreen handling the audio, phone and fuel economy displays. I was impressed with the base sound system and interacting with the touchscreen is mostly intuitive and straight-forward. Underneath is a manual climate control system, something you don’t expect in a nearly-$29,000 car. There are nice touches like keyless entry, push-start ignition and a power moonroof and a surprise or two – like the Qi wireless charging mat built into the bin at the front of the console – that last bit comes compliments of the Special Edition trim. While the SE is a relatively basic car, you can always step up a notch to the more kitted-out XSE if you need more “stuff”.

You’ll find plenty of space in the relatively spartan rear seats. At 5’10”, I had lots of leg room and a few inches of extra head room. The middle position is wide enough and has enough leg room to accommodate an adult passenger in relative comfort, and that’s pretty unusual.

Our three kids were happy with the space back there, and if you need child seats in your vehicle, there are two sets of LATCH anchors to secure them. The Camry offers plenty of in-cabin storage options. Under the centre stack at the front of the console is a lidded bin, where you’ll find the aforementioned wireless charging zone, as well as USB, auxiliary and 12V plugs, and there is a huge carpeted bin under the armrest with another 12V plug as well as the expected change bin on left underside of dash.

Camry’s 436 litre trunk feels large but the trunk arms aren’t shrouded, so watch that they don’t pinch your groceries or luggage. The rear seats do fold down (in a 60/40-split) and the pass-through is sizable, allowing for a decent expansion of your cargo space if needed. The SE is motivated by a 2.5-litre 4-cylinder, which sends 178 HP and 170 lb.ft of torque to the front wheels courtesy of the 6-speed automatic transmission. Fuel economy is OK, but not stellar. While Toyota rates this model at 9.4 L/100 km (25 US mpg) in town, and 6.7 L/100 km (35 US mpg) on the highway, I achieved a not-that-great average 10.5 L/100 km (22 US mpg) during my week. My driving included mostly city commuting, but more than my usual share of freeway drives too. I’d hoped for slightly better mileage. The 3300lb (1475 kg) sedan is quite responsive off the line and around town, but once you’re on the move and need more power, like merging or passing, you’ll find the 4-cylinder feels a bit short on power. Of course, there are the V6-powered Camrys waiting in the wings, ready to remedy this exact issue if it matters to you.

The transmission is smooth as always, and the SE can be shifted manually with paddle shifters (with rev matching – hello!) And there is a Sport mode if you want it to hang on to gears a bit longer, though this doesn’t do much to transform the driving experience. Another SE (and XSE) specific item is the sport-tuned suspension. Although the steering remains somewhat numb and detached, the Camry SE handles pretty well but the price you pay for that is a ride that gets more jiggly at times than you’d expect from a Camry. Personally, I prefer the standard Camry suspension. It’s more supple and more in line with the Camry’s mission, in my opinion.

Visibility out of the Camry is quite good, and the brakes are well suited to the car – powerful enough and easy to modulate. The cabin is pretty serene – road, engine and wind noise levels are all quite low. The Camry continues to soldier on, generation after generation, offering up a package of comfort, reliability, practicality and sensibility. There’s nothing super-memorable about it, yet there’s nothing it doesn’t do well. If that’s what you’re after, and you don’t need your car to stand out in one particular area with a ton of character, you’d probably be very happy with a Camry. WAF (Wife Acceptance Factor) was quite high. She said it felt very smooth and drove like an expensive car, but she missed the goodies – heated seats, automatic climate control, etc.

And therein lies the rub with the SE models. Sure, they look a little sportier inside and out, and yes they handle a bit better than the non-SE Camrys, but with taxes, you’re paying nearly 29 grand for this somewhat-base SE. If I was after a sport sedan, the Camry wouldn’t be what I’d be shopping for – sure, the SE is somewhat sporty, but if that’s what you’re after, there are competitors that are much more entertaining to drive. On the other hand, if the Camry is the answer in your car shopping quest, I’d personally bump it up a couple of thousand dollars and get the loaded XLE trim – it comes with everything and has a more Camry-like demeanour on the road when it comes to the ride. The 2016 Toyota Camry is about the closest thing to being everything to everyone, and that is what it has always done well. 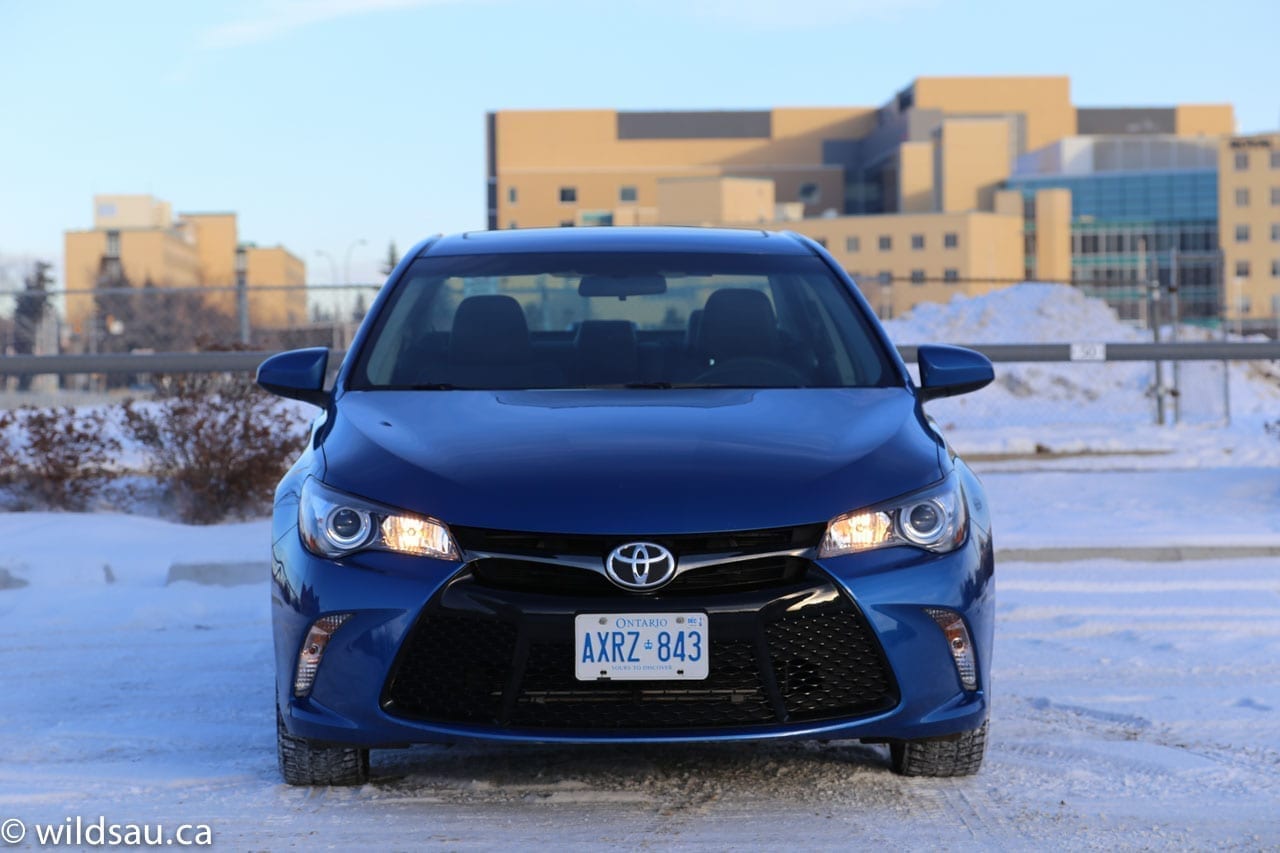