Fiat’s cute new crossover is a grown-up 500 with all-weather abilities and more space. The all-new 500X model is based on a new global platform from Fiat – Jeep’s new Renegade sits on the same one. While the 500X certainly stands out from its Cinquecento-derived 500 stablemates, its snout and profile are instantly recognizable as Fiat, and certainly do pay homage to the original Fiat car. It’s bigger in every way, of course. While the Renegade tries to make the most of its broadened shoulders, the 500X’s “brawn” is concealed in a set of sleek Italian lines that I found quite attractive from a number of angles. Fiat adds further flair with splashes of chrome – the door handles, and the surrounds for the headlights and tail lights all get the bling treatment. Female onlookers loved this thing, by the way, and it got a ton of “Cute!” compliments. My review vehicle’s deep Rosso Perla paint looked great, and it had some serious stance sitting on those 225/55-wrapped 18-inch rims. The Trekking trim gives the 500X a couple of aesthetic extras implying off-road worthiness, but it’s nothing more than visual add-ons. Even their literature calls it “rugged appearance” in quotes. I think the designers got the proportions right, and overall, the styling is well done. It certainly has some character and it’s interesting to look at. It’s not for everyone, but what Italian car is? Inside, it’s a sea of dark plastics, a few of which are soft-touch and the swath of material over the dash has a very nice leather-like texture on it. Ergonomics are decent, and as you’d expect in a Fiat, you find rounded edges and shapes everywhere you look. Fit and finish is decent, but there was an incessant creaking from the sunroof overhead and I thought that some of the controls (the rotary knobs for the automatic dual-zone climate control, for example) felt flimsy. In terms of spaciousness, I’m 5’10” and I had more than enough head room up front. The 500X’s heated cloth seats were comfortable and quite supportive. Any information you could wish for can be gleaned from the driver information screen between the main gauges. Centered in the dash is the Uconnect 6.5-inch touchscreen – its interface remains one of the better ones, handling your navigation and phone functions as well as the tunes coming out of the upgraded Beats Audio stereo. I wasn’t thrilled with the audio, considering it’s a thousand-dollar upgrade. Optioned as it was, my review car had some swanky touches like keyless entry and push-button ignition, a heated steering wheel with a nice fat and grippy rim, a remote starter, automatic headlights, and a sizeable dual-pane sunroof overhead. The driver assistance technology was competitive for this class – it had rear parking sensors and a back-up camera as well as blind spot monitoring and a rear cross-path detection system. The rear wheel well makes things a bit tight when getting in and out of the back seat, and it’s not hard to get your pant legs dirty as you try to clear the sill. I felt that the back seating – there are three seats – was a bit too upright, and that made it less comfortable than many other rear seats. The seats are not adjustable in any way, and leg room isn’t great, though it was adequate for me. Head room is also somewhat limited – I only had about an inch to spare. The middle seating position is narrow but can accommodate an adult if necessary, providing they’re OK with straddling a bit of a floor tunnel. Our three children didn’t complain and had enough room back there, and you have two sets of LATCH anchors for child seats if that’s something you require. You get a few places to stow your stuff around the cabin. There’s an open drop-in bin at the front of the console, complete with 12V, USB and auxiliary plugs, and there are two gloveboxes – a smallish upper one, and a typical lower one. You also get a bit of space underneath the sliding armrest lid. The handsome styling of that sloping rear hatch definitely takes its pound of flesh when it comes to the 500X’s storage space. Pop the tailgate and swing the hard parcel shelf up and out of the way, and you’ll find a miniscule 350 litre trunk at your disposal. That’s not even competitive, to be honest. The 60/40 split rear seats do fold flat – when you get them out of the way, the cargo room only grows to 560 litres. To put this into perspective, the 500X’s trunk with the rear seats folded down is close to the size of some of the competition’s trunks with the rear seats in use. Ouch. The upper-level engine here is Fiat’s 2.4L Tigershark inline-4, which makes 180 HP and 175 lb.ft of torque. I’m going to be honest and admit that I prefer the smaller and slightly less smooth turbocharged base engine for its immediate torque delivery. Anyway, the power is delivered to the first all-wheel drive system in the Fiat 500’s history through a 9-speed automatic transmission. The 500X launches assertively off the line, and I found its acceleration satisfying. But the transmission ends up ruining many driving moments. You simply can’t help but be aghast at its herky-jerky attitude between gears, particularly when shifting between lower gears at lower speeds. The worst was the 1-2 shift when the car is cold – it often felt as though the car actually stalled momentarily. I’ve said it before and I’m sad that I need to repeat it here – FCA’s interpretation of this 9-speed transmission has been terrible in every single instance that I’ve had to spend time with it. The gears can be shifted manually using the gear selector – don’t bother though, as it’s slow, and it won’t register more than one shift at a time, which gets tedious when you’re trying to make your way down through a number of gears. 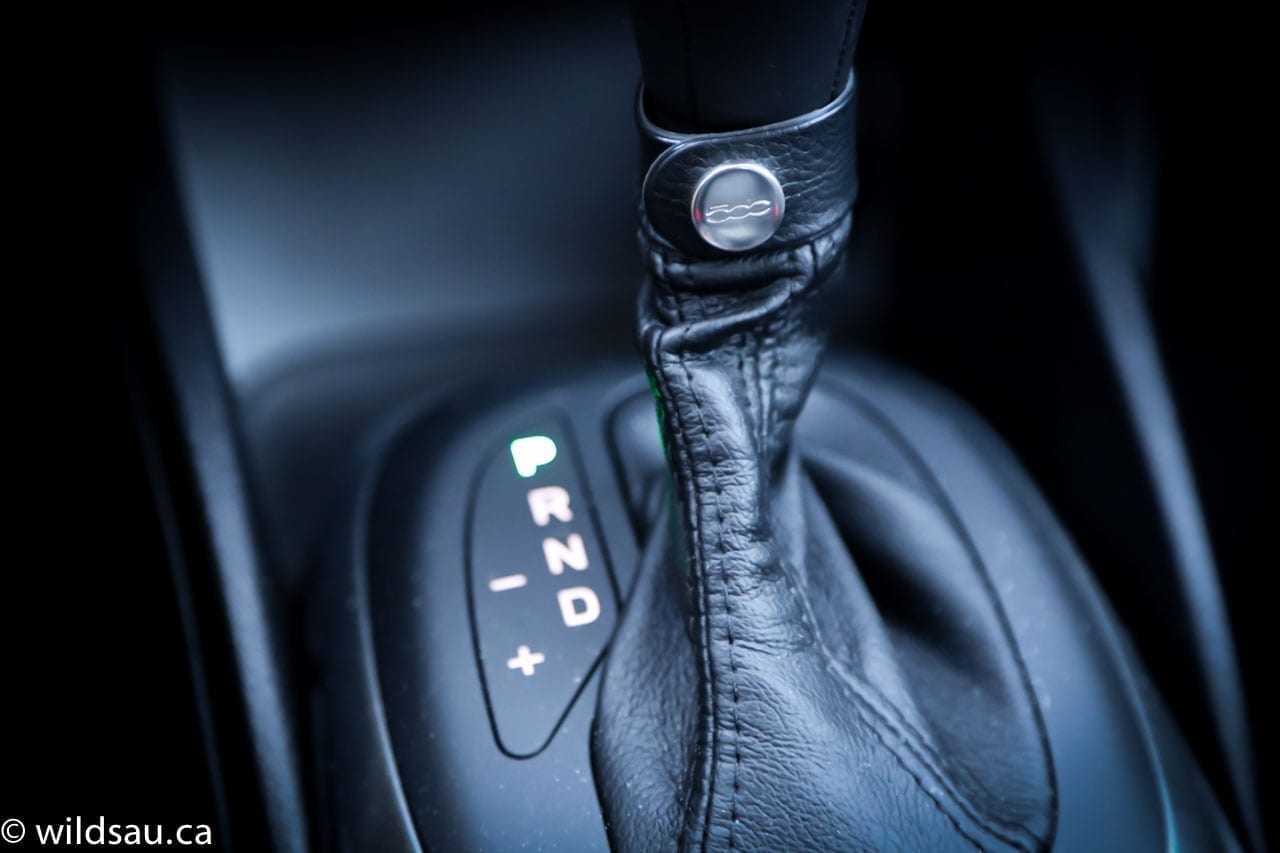 Fiat has dialed the ride in as European-firm, so the vehicle feels well-controlled and it is comfortable during most driving. One exception to a relatively refined-feeling suspension – I found the suspension got loud and crashy over road surface irregularities like potholes and speed bumps, even if you were going over them at a snail’s pace. The 500X handles well and while it suffers from understeer and leans quite a bit, it bites aggressively when pushed and takes on corners and curves with enthusiasm. The 500X has three drive modes – Normal, Sport (which impacts the throttle response, shift pattern and steering) and Traction (for wet or slippery surfaces). As I reviewed this in the middle of an Edmonton winter, I had plenty of opportunity to test the traction of the all-wheel drive system and felt it was pretty good overall. It is clearly a front-wheel drive based system – the rear axle is coupled and fed power when the front tires slip, but once it’s online, the 500X scrambles around pretty well. With the traction control turned off, it even allowed me to do some donuts in the fresh snow – in a large, open space with no people or traffic around, of course! Of course, other than the Trekking visual bits, the 500X makes no pretense about being off-road worthy, but I did appreciate the ground clearance. I was impressed by the 500X’s noise levels. Road and wind noise were notably absent, and remained well-controlled even at highway speeds. The exception is the Tigershark engine’s tendency to get buzzy when you step on it and when the revs climb. But otherwise, it was impressively quiet.

Visibility out of the vehicle is just OK, and those chunky rear quarters make for some thrilling shoulder-checking moments. When it comes to buying a bigger Fiat, your choices are this new 500X and the 500L which offers marginally more space, but adds in horrifying styling. I’d suggest the poor-selling 500L’s days could be numbered as I can’t imagine a lot of people leaning that way when the much better looking and more capable 500X is sitting next to it. WAF (Wife Acceptance Factor) was middling. She definitely liked the exterior styling and said it was pretty easy to drive, but she was horrified by the tiny trunk which seriously hampered her ability to spend the day productively at the mall, and she commented on how the shifting felt rough. When my generally forgiving wife notices the transmission’s faults, it says a lot. The 500X certainly has a lot to offer and is the best Fiat 500 model for my needs, but after all the option boxes were checked, I was looking at a $40,000 vehicle with fabric seats, a tiny trunk and a poorly-executed transmission. That’s too bad, because it’s a great-looking first attempt for Fiat’s cross-over team. But for this kind of money, you’ll find me looking at a Honda HR-V (for more space) or a Mazda CX-3 (for an enthralling driving experience, day in and day out). And both of those competitors will save me a bundle of money.