Review and photos by Tom Sedens. All photos from this first-drive event. Ford’s Escape got a major, MAJOR restyle a few years ago. I was there at the LA Auto Show for the unveiling and there were more than a few audible gasps when they pulled the cover off of the new Escape. It was a massive departure, but after a few years and many, many new Escapes sold, the new Escape isn’t as shocking anymore.

Ford has treated its best-selling little SUV to a mid-life refresh. Best selling, you ask? Yep. Ford Canada moved 47,000 of these little guys in 2015. That’s a lot of vehicles. It’s actually the best-selling Ford product after the F-150. I recently flew to Calgary where I was introduced to the 2017 Escape. After the introduction, we headed out onto the open road, making our way from Calgary to Lake Louise and then on to Jasper, traversing some of the most breathtaking scenery in Canada. On the way, some worthy stops are the Columbia Icefields and the stunning Athabasca Falls. And obviously, when you’re in Jasper, you should stay in the Jasper Park Lodge, like we did. It’s an incredible experience, surrounded by beautiful vistas and a ton of things to do and see. So, what’s changed? Well there’s some new things to look at on the exterior, in the interior and even under the sheet metal.

Visibly, the 2017 Escape now shows some family resemblance to its bigger crossover brother, the Edge. The corporate Ford grille makes its first appearance in the Escape line-up and it’s flanked by new, much more attractive headlight pods. That along with a wider stance give the whole vehicle a more rugged appearance. The rear fascia also gets a new look, including nicer tail lights. Ford has a number of new wheel packages to choose from too. And hey, want to dress it up even more? Go for the Sport package on the SE and the Titanium models. It adds black-tinted tail lights, black bezels around the headlights, slick black 19-inch rims and partial leather sport seats. One of the vehicles I drove had the Sport package and it certainly turns heads. Speaking of trims, let’s get that out of the way. The entry-level S gets an old-school 2.5-litre 4-cylinder engine, and all the basics you need to get you from point A to point B. Ford’s volume seller (about 70% of the Escapes sold) is the mid-level SE. It’s only a couple of thousand more than the S and comes very well-equipped. And there’s the range-topping Titanium which can be had as loaded as you want – or as loaded as you can afford (a topped-out Titanium is over $42,000).

Buy the SE and you’ll find an all-new 1.5-litre EcoBoost engine under the hood. It puts out a solid 179 HP and 177 lb.ft of torque, which is plenty for around town. Once we got onto the highway and then into the mountains, I felt that the 1.5 could have used a little more get up and go, but it still performed reasonably well. If you really need that extra oomph, there’s an easy solution. Bump it up the 2.0-litre EcoBoost with the new twin-scroll turbocharger. It send a stonking 245 HP and 275 lb.ft of torque to the road and believe me when I say it goes. Oh, it goes! Power delivery is creamy-smooth and linear, and it pulls hard through every gear making highway passing or mountain pass climbing a walk in the park. Of course, you’ll pay for it dearly at the pump, as it gets quite thirsty when you’re on it. Once you get in, you’ll notice some changes too. The key one in my opinion is the revision of the centre console. One of my biggest complaints regarding the Escape was the almost-complete lack of  storage around the cabin. The new, more traditional centre console moves the gear selector and makes for some new storage capacity in the way of some great cupholders, a cell phone bin and additional room under the armrest lid. Ford also put in a bucket-style glove compartment, which means everything goes into the lid and nothing falls out when you open it – I like that!

Another immediately obvious improvement is the switch to Ford’s new SYNC 3, which is a vast upgrade versus the older MyFordTouch. It runs the 8-inch touch screen and helps you manage the entertainment system, your phone functions, vehicle settings and navigation (if applicable). Speaking of entertainment, the up-level Sony sound system is fantastic! You can also connect your iPhone for Apple Car Play, or your Android for Android Auto, allowing you to access your phone easily. There’s also seamless Siri integration, allowing you to access your phone functions without taking your eyes off the road. 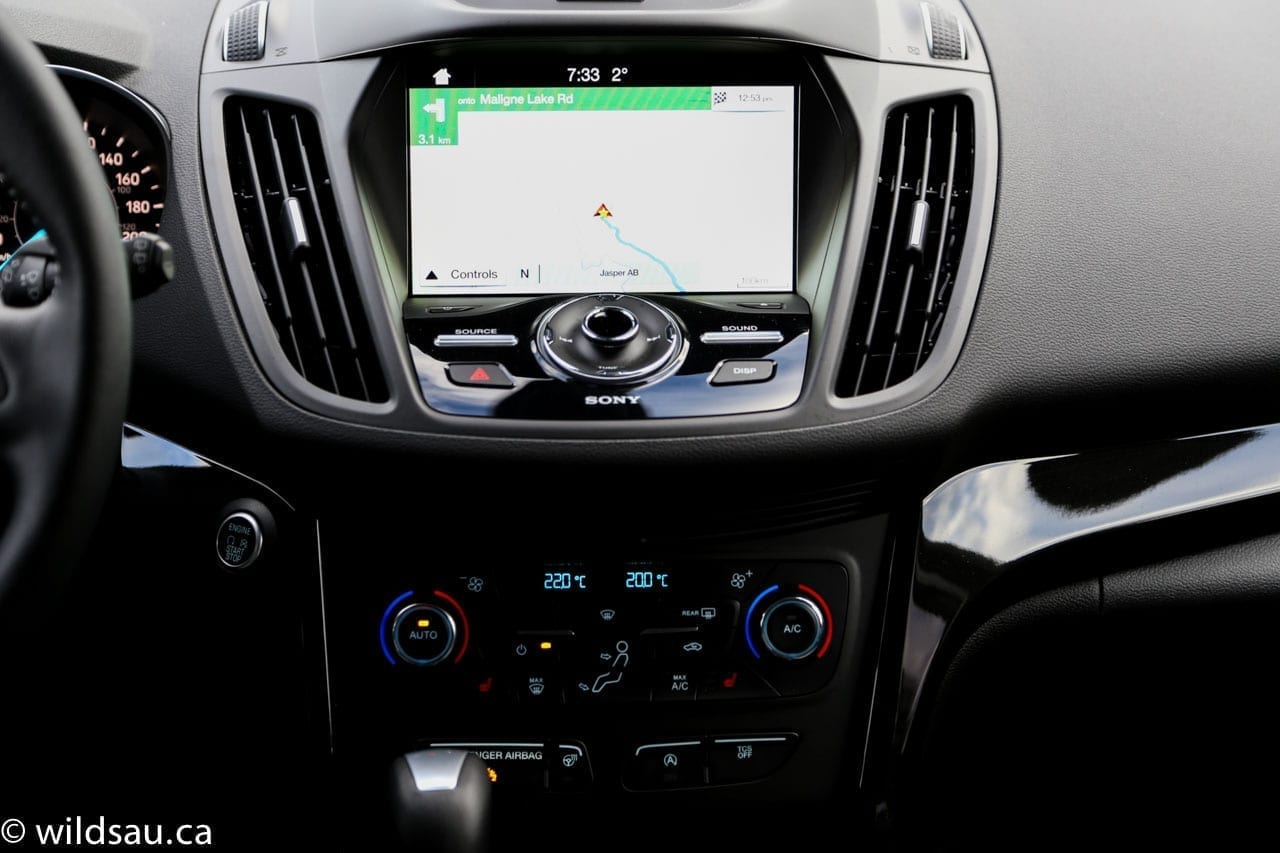 On the road, the Escape impressed me. To be honest, I’ve always been impressed by the Escape’s manners on the road, but the 2017 does it even better. As mentioned, the two EcoBoost engines do a fine job in motivating this little SUV. The 6-speed transmission is smooth and relatively intelligent. It has a Sport mode and can also be shifted manually using paddle shifters.

Ride and handling are exemplary, and the 2017 Escape can easily keep up with much sportier cars in the twisties. It really is an impressive vehicle and will surprise many drivers with its competence on the road. The Escape has always been reasonably quiet, but Ford told us they put a big effort into making it even quieter and it has become the quietest vehicle in its segment. Nearly 10 hours on the highway proved their point. There is virtually no road noise, and wind noise was also well managed. While we didn’t really get a chance to test out the all-wheel drive capability on the dry roads, I did appreciate the Escape’s torque vectoring control, which balances the torque delivery to enhance handling and control.

Ford has added auto start/stop technology to its EcoBoost engines and although it’s defeatable, there’s no reason to do so – it’s almost impossible to notice it shut your engine down and start back up again when you come to a stop.

Do you tow? The 2.0 EcoBoost-equipped Escape (along with an optional tow package) can tow 3,500 pounds – quite impressive for a small SUV. Other nifty touches include the lovely panoramic Vista Roof, which makes for a nice open, airy interior. I appreciate the hands-free, foot-activated lift gate. If you have your hands full of groceries (or luggage in this instance), you just kick under the tailgate and it automatically opens. Pretty handy! And hey, if you like your technology, the Titanium trim has it in spades. Park Assist will parallel or perpendicular park your vehicle and pull it out of a tight parking spot for you as well. You’ll also find lane-keeping system (including active assist), adaptive cruise control and blind-spot monitoring.

I found the rear seats adequate in terms of head and leg room, but the seats weren’t the most comfortable I’ve used. The 964 litre trunk is spacious and very usable. Well, Ford obviously had a winner with the Escape already. But the 2017 Escape really impresses me as it seems to be a response to what the marketplace and the consumers were telling Ford. With improvements like the new-found storage capacity, auto start/stop technology, SYNC 3, etc., Ford has managed to sharpen the edge on the Escape again, making it a fierce, progressive competitor in this highly contested vehicle category. Disclosure: Ford paid for my airfare, accommodations, meals and fuel and provided the vehicles for this test drive event.