Honda’s compact SUV is all new for 2017, and is better in every way. The CR-V is a big deal to Honda. It’s is the second-biggest seller for them, after their perennial (I don’t know, does 18 years in a row as best-selling car in Canada count as perennial?) sales driver, the Civic. Anything that is a manufacturer’s second biggest sales pillar will get special attention, and the fact that the compact SUV category has absolutely exploded in the last few years makes the CR-V an even more important jewel in the Honda crown.

Honda made it pretty clear that they are after the #1 spot in this hot vehicle class, and I appreciated that they weren’t shy about who their competition is. So why is it that all these compact SUVs/crossovers are selling almost as quickly as they can make them? I think the combination of offering people the things they want (space, utility, all-weather ability) without all the compromises that were baked into yesteryear’s SUVs is hard to beat.

Honda has sold over 450,000 CR-Vs in Canada since the 1997 launch. That’s a very significant number. But when you’re shooting for #1, you’ve got to be honest with yourself about why you’re not there. Honda came to the table and admitted that the CR-V, while being great, sported some pretty conservative styling, performance and an interior to match. They set out to change that with, in their words, aggressive styling, dynamic performance, a premium cabin experience and a better case in terms of value to the customer. Let’s have a closer look at the 2017 Honda CR-V then, and see what they came up with for this all-new, built-in-Canada contender for the crown. Honda brought me out to beautiful Victoria, B.C. to take part in a media launch event, allowing me to have a close look at the CR-V before it hits dealerships.

The first thing you’ll notice is the revised exterior. Although it is instantly recognizable as a CR-V, it is an all-new design. It is certainly bolder and it looks slightly bigger and more substantial to me. Part of that comes from a very slight increase in size – it is 15 mm longer and 15 mm taller than before, and 35 mm wider. And although Honda has given it 38 mm more ground clearance, it actually looks more planted than before. And you can’t miss those new fenders.

Another fully modern step is the LED lighting all the way around, including Honda’s new corporate signature front end with the LED daytime running lights, as well as LED tail, brake and turn signals in the back. Bump up to the top-level Touring trim and you’ll get bright LED headlights too.

Once you get inside, you’ll notice that Honda was clearly focused on ease of use and spaciousness. A clean and simple dash layout makes for a very nice cabin, and the materials used are mostly soft-touch plastics with wonderful texture, giving the interior a much more premium feel than before. Quipping that the Japanese love to make up words, Hayato Mori, Honda Canada’s Senior Manager of Product Planning, introduced us to “beautility” which is how they describe the new interior. Whatever word you end up using to describe it, it certainly looks good and works well. There’s an all-digital instrument cluster, and the wide, clean screen panel on the dash (which is significantly bigger than the actual screen in it, by the way), sports a … wait for it … volume knob. Yay! Welcome back, Honda volume knob – you were sorely missed! The Display Audio system (along with Apple CarPlay and Android Auto) is standard across every trim. Speaker complement ranges from four speakers in the LX to nine speakers (including a subwoofer) and 331 watts of amplification in the Touring trim. You also get navigation with the Touring. The heated front seats were very comfortable, even after a few hours on the highway. I liked that attention that was paid to the centre console’s storage abilities. There’s a nifty new flexible tray there, which can slide toward the front, allowing for a nice rubberized tray for your phone, and plenty of room underneath. It can be moved backwards, to gain access to the space underneath, or it can be removed and stored deep inside the console, allowing for things as big as handbags to sit easily in the console. My wife would absolutely love this functionality. By the way, the main storage bin inside the console has two USB plugs and a 12V plug. All trims come standard with push-button ignition, a remote engine starter and walk-away door locks. Bump it up to the EX-L trim or higher and you’ll get a heated steering wheel and heated rear seats. And there’s an enormous panoramic sunroof – I like that a lot, but unfortunately, it is only available in the Touring trim. The spaciousness I mentioned isn’t just word play. Honda actually extended the new CR-V’s wheelbase by a full 40 mm, which allowed them to increase the rear leg room by 53 mm. That’s a big deal. There is certainly a lot of leg room back there, and thanks to a nearly flat floor, it works for three passengers – even an adult can fit in the middle seat. The head room is generous too. I found the reclining rear seats comfortable (although I didn’t spend a lot of time in them) and Honda added two high-power (2.5amp) USB charging ports for the rear passengers. Nice! The rear cargo space has an additional 250 mm of length (with the rear seats folded down), for a total of over 6 feet! The increased space has been augmented by a very cool movable trunk floor panel. You can leave in the higher position for a flat trunk, or you can drop it down, allowing for even taller items to be moved. There is plenty of space on the sides (flanking the wheel well bulges). All of this adds up to top-of-class cargo space. The power tailgate is included starting at the EX-L trim, and the Touring gets the cool new hands-free power tailgate. Turns out that the 2017 CR-V isn’t just sporting a new skin and a fancy new interior. It’s actually riding on a new chassis too, based on their world compact platform. And there’s even news under the hood. All CR-Vs get a new turbocharged 1.5L 4-cylinder. Based on the Civic’s engine, this one is tuned for a higher output and is rated at 190HP at 5600 RPM and 179 lb.ft of torque, available between 2000 and 5000 RPM on one of the flattest torque curves I’ve seen. It runs on regular fuel and Honda tells us that all-wheel drive CR-Vs will use 8.7 L/100 km in the city and 7.2 L/100 km on the highway. Front-wheel drive CR-Vs are rated at 8.4 and 7.0 respectively. For the record, I ended up averaging 9 L/100 km after about five hours of driving in a brand-new vehicle – there was some city driving and plenty of relatively slow, winding mountainous highway driving. The power is routed through a CVT that Honda is pretty excited about. They even claimed “it doesn’t feel like a CVT”. The CVT is smooth and relatively responsive, but there’s plenty of engine noise when you step on it and it sends the revs soaring. And let’s just get this out of the way – it does feel like a CVT. You can engage a Sport mode (which makes things more sprightly) as well as a Low mode. There is also an Eco drive mode, which really isn’t much fun. Even the all-wheel drive system is new. It weighs less, and actually allows for up to 40% of the torque to be sent to the rear wheels versus the previous generation’s 25% maximum. We were in Victoria for a few cold and rainy days, and the all-wheel drive did a great job keeping us in our lanes on the slick mountain passes. The new powertrain is responsive around town, and there’s plenty of get up and go. Once you’re on the move, it’s not quite as sprightly but it never felt underpowered. There is certainly more performance to speak of than in past generations of the CR-V and there’s more than enough to be competitive in this class.

The rear suspension is a sophisticated multi-link set-up now, and frankly the CR-V’s ride is fantastic. In the compact SUV category, it’s one of the very best. It was comfortable in and around Victoria’s less-than-stellar residential streets, and it remained composed and smooth on the highway. The steering, while still quite numb, has a variable ratio and lock-to-lock has been reduced by almost a full turn of the steering wheel. The CR-V feels less top-heavy now, particularly when you throw it into curves and while it wasn’t sporty, it was absolutely competent in all of the situations we threw at it. When it comes to safety, there’s plenty to talk about as well, starting with Honda’s new AHA (Agile Handling Assist) – a brake-based yaw control system that should help keep things stable in situations like emergency obstacle avoidance and fast curves, such as highway merge ramps. Honda made a pretty big deal about how much work they did to reduce the noise levels, and in terms of engine and wind noise, it was noticeable. Sadly some of the mountain roads we took required winter tires, and the noise coming from them negated some of the work Honda has done.

After several hours behind the wheel, I came away with a sense of confidence in the CR-V. Its performance is good, although I wouldn’t call it dynamic. Is that a knock against the CR-V? Not at all. Most people don’t buy compact SUVs for their dynamic performance, but rather their daily driveability – and the CR-V excels there. Honda is pretty proud of their new pricing structure. Prices did go up, with increases ranging from $400 more for the LX to $1,000 more for the EX-L and the Touring trims. But Honda claims they are adding an average net value of around $3,500 to each of the CR-V trims with all the improvements and additional standard equipment. The 2017 Honda CR-V is definitely a solid step up the ladder. Honda has made improvements in terms of quality and sophistication, performance and efficiency, spaciousness and styling. And that checks all the boxes when it comes to shopping for a crossover vehicle. There is no doubt that the CR-V will continue to be a best-seller for Honda, and perhaps it has what it takes to take the crown in the category. It is definitely a contender.

Disclosure:  Honda Canada paid for my airfare, accommodations, meals and fuel and provided the vehicles for this test drive event.

All pictures taken during the media launch event. 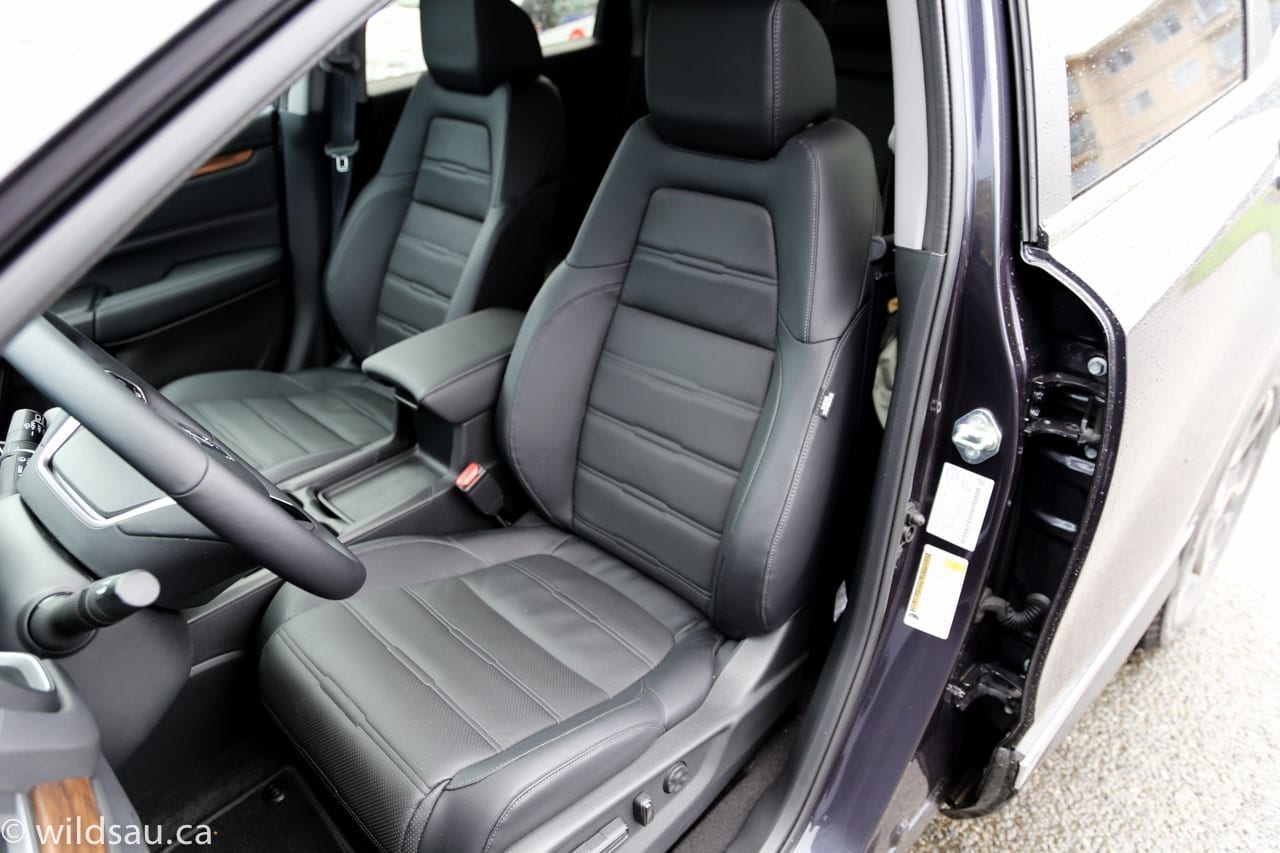