Acura’s mid-size sedan – is the A-Spec trim as exciting as it looks?

Review and some photos by Tom Sedens. Any non-Wildsau-copyrighted pictures are thanks to fellow local autojournalist Wade Ozeroff. I’ve experienced some technical issues recently that compromised a number of my press car pictures and Wade was kind enough to step in and save the day. Check out Wade’s work and wisdom at wozeroff.com While the TLX isn’t going to set the world on fire with its styling, it’s a nice looking car and gets a slightly bolder design. You can make that a capital B “Bold” if you opt for the A-Spec package. It gives you a lot of darkened or blacked-out trim, which I really like. You end up with a dark chrome surround for Acura’s awesome new Diamond Pentagon grille – finally a grille I can love again – and a black trunk spoiler, as well as darker effects for the head- and tail-lights. Speaking of headlights, they are super-bright Jewel Eye LED headlights. A-Spec also gets sportier front and rear fascias, the latter of which has two very meaty exhaust finishers that are almost a bit too much. And finally there’s a set of 19-inch rims

The TLX gets a lot of looks on the road. The fancy red colour and the A-Spec trim certainly help in getting people’s attention. Once inside, you’ll find a somewhat boring interior. There’s nothing exciting going on here, but the materials are nice, with soft touch plastics everywhere. The A-Spec package adds ambient red lighting which looks great. The fantastic heated A-Spec steering wheel feels just right in the hands. 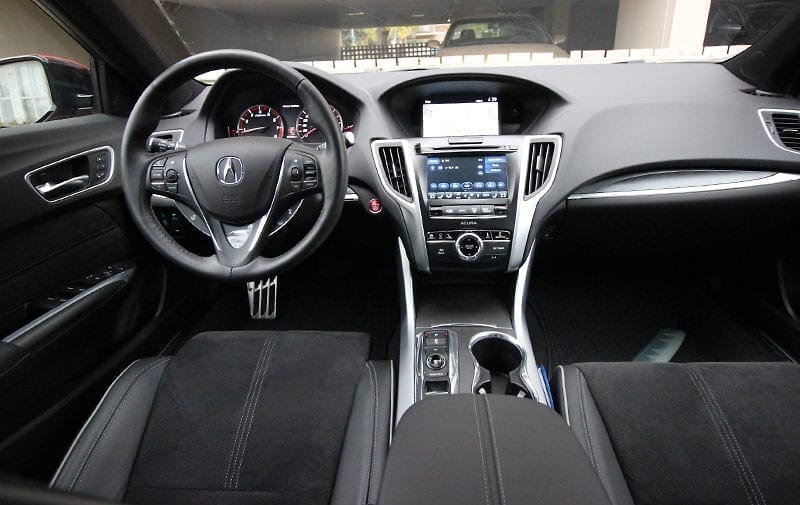 Acura is still stuck on this dual-screen system – which isn’t great. It seems that they have tried to uncomplicated it somewhat, but it’s still inelegant and non-intuitive to me. The upper screen is for the backup camera, navigation and other stuff – the lower one shows contextual controls for the (totally awesome) audio system, phone and the dual-zone climate control system. It slowly starts to make sense and works, but it’s far from my favourite. While I’m complaining, I’m still not a fan of the push-button transmission. It feels like it’s from the future and I would prefer any kind of old-school physical lever to select my P,R,N and D thank you very much. And to be honest, if you’re selling this as a sports sedan, I think most people buying it for the “sport” aspect would want to find some sort of physical device to interact with their transmission. The rear passengers will find a handsome seating area with comfortable heated seats for the two outboard passengers. The middle position straddles a large drive-shaft tunnel and really would not work for an adult. I had enough head and leg room to be comfortable in the back (I’m 5’10”), but there is not a lot of foot room under the front seats.

I find the omission of any kind of power/charging port strange in a relatively high-end sedan. The middle seatback folds down – there are some cupholders and an armrest. And that’s it.

The 405L trunk feels large and also has significant under-floor storage. If you need even more space, the rear seats fold down 60/40. Although the TLX has lots of power off the line and it feels highly responsive, I found myself thinking the opposite to what I often say about other cars – the TLX doesn’t feel as fast as it actually is. It is quite fast but it’s so smooth and feels so restrained that some of the sportiness has been watered down. And somehow, it never feels like it quite makes 290 hp.

There are four drive modes – Normal, Economy, Sport and Sport+ – which impact the TLX’s responsiveness, steering weight and transmission programming. The car also sounds more and more fantastic as you progress through these drive modes, which is a bit tragic – because you know the sounds are not real and the car is producing them artificially for your listening pleasure and piping them into the cabin. With that said, Acura certainly got the sounds right. The lusty V6/V8-cross noises are what this car should sound like. The transmission is smooth and does a good job. But since Acura is selling this as a sporty A-Spec sedan, I was very disappointed in how glacially slow the manual gear changes are when you want to take control. It’s not very rewarding at all.

I liked the TLX’s firm but comfortable ride – Acura found an excellent balance between luxury and comfort. The car handles pretty well and the SH-AWD exhibits tremendous grip although the car heads into understeer territory quickly once you start trying to have fun. We found the TLX mostly quiet, except on some surfaces for which I blame the tires. There’s an auto start/stop system (which is defeatable). WAF (Wife Approval Factor) was decent. She liked how it drove and how it felt mid-level luxurious. But she said the exterior looks ridiculous – referring mostly to the A-Spec aggressiveness.

I thought the TLX felt very refined and very well put together. The interior feels a bit behind the curve, and worst of all, the sportiness isn’t really there. As noted, it never feels as fast as it actually is. I like the TLX but I’d take mine in a non-A-Spec trim and leave it as a nice, mid-level luxury sedan. It’s sporty enough as it is, and the extra bits aren’t worth it, because it doesn’t add much to the driving experience.