The most compact of Ford’s crossovers has arrived. This tiny thing rounds out Ford’s SUV/crossover line-up, making up the small end of the size spectrum. While it is a very compact package, I did find it to be pretty capable. The S trim starts at $20,985 but this one, the top of the line SES, sneaks up over $30,000 before tax.

I found the EcoSport’s size to be almost shocking. It’s small – smaller than almost everything else in the parkade around me. The styling is interesting. Ford says “it looks as good on the outside as it feels on the inside” – a very subjective tagline indeed. The front end has a touch of aggression and the grille is flanked by LED signature driving lights. While it’s short and stubby, the upright profile works well in my opinion and Ford got the EcoSport’s styling right. It’s bold enough to stand out, without making a ridiculous statement. It looks fun and it looks practical. I enjoyed the proportions, particularly the small rear overhang, and thought the painted 17″ aluminum wheels looked great. The EcoSport gets some fairly basic interior styling but it works well. Materials are, as one would expect at this price level, pretty basic as well. There is some soft(ish)-touch plastic on the dash, but other than some elbow pads on the door panels, most of the interior is clad in cheaper, hard plastics. I did enjoy the colourful (in this case, a metallic amber) trim pieces around the cabin – they help to brighten things up and coordinate with the pinstripes on the seats. The seats are comfortable – they’re heated, partial-leather-trimmed and the driver’s side is power-adjustable.

I liked the big 8-inch SYNC 3 touchscreen that juts out of the dash – it handles your phone, sound system, navigation and vehicle settings. Apple CarPlay and Android Auto work beautifully here and there’s a wifi hotspot that allows up to 10 devices to connect. Below it is an automatic climate control system and there’s a sunroof overhead. 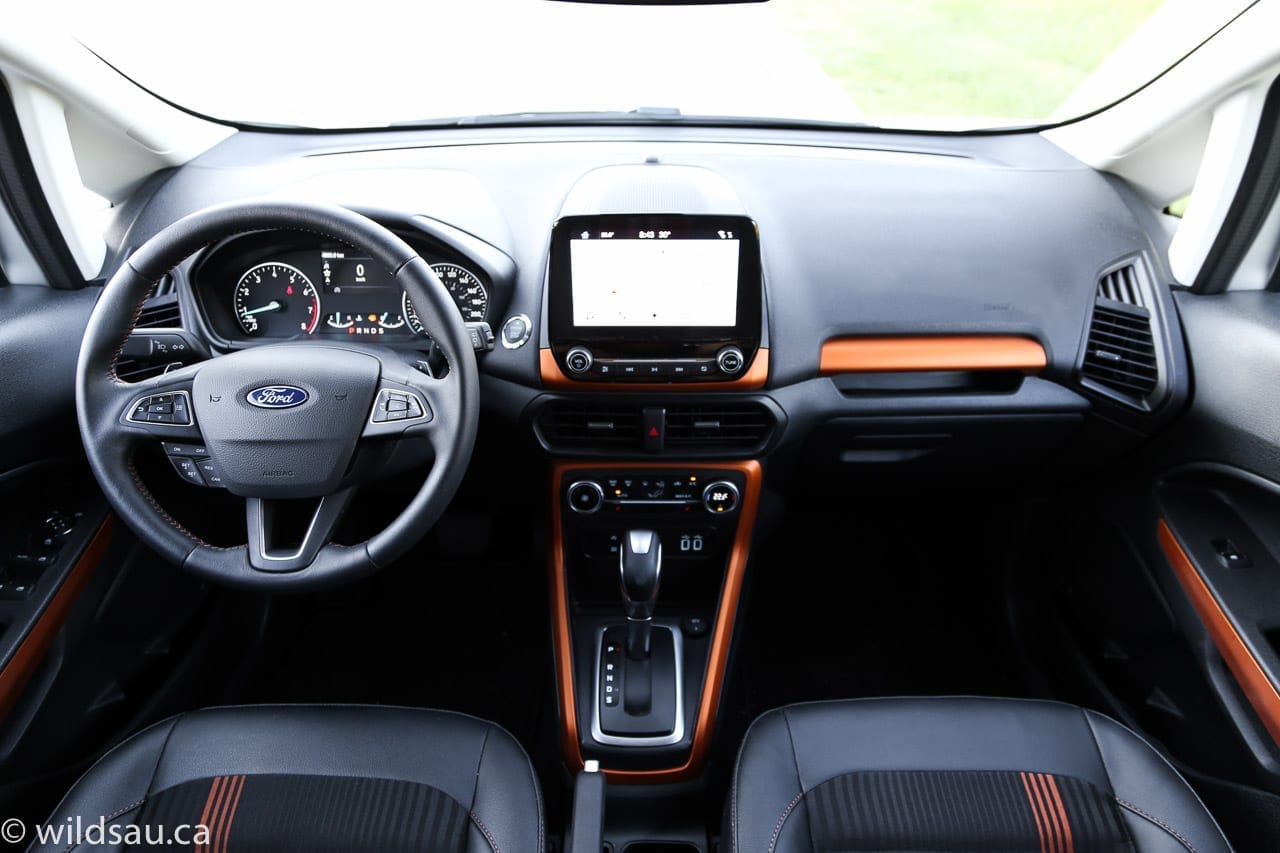 Ford’s website claims the “EcoSport offers your second-row passengers loads of leg-, head- and hip-room”. I found that to be a stretch, if you don’t mind me using that word. If there is a downfall in the EcoSport, it would be rear seat legroom. Headroom is fine actually, but at 5’10” and sitting behind my own driving position, my knees were totally pushed into the back of the front seat. Thankfully, it’s a soft seatback. But there’s very little legroom to be had. Rear passengers get a 110V household plug for charging their devices, which is a nice touch. The middle seatback folds down to become an armrest with cupholders. Another useful touch – there are dual storage pouches on the back of the front seats.

The most usable space is the open bin at the front of the centre console, where you’ll also find two USB plugs and a 12V plug. There’s also a small storage space under the armrest lid, and a couple of bins in the console that are almost too small to be truly useful. 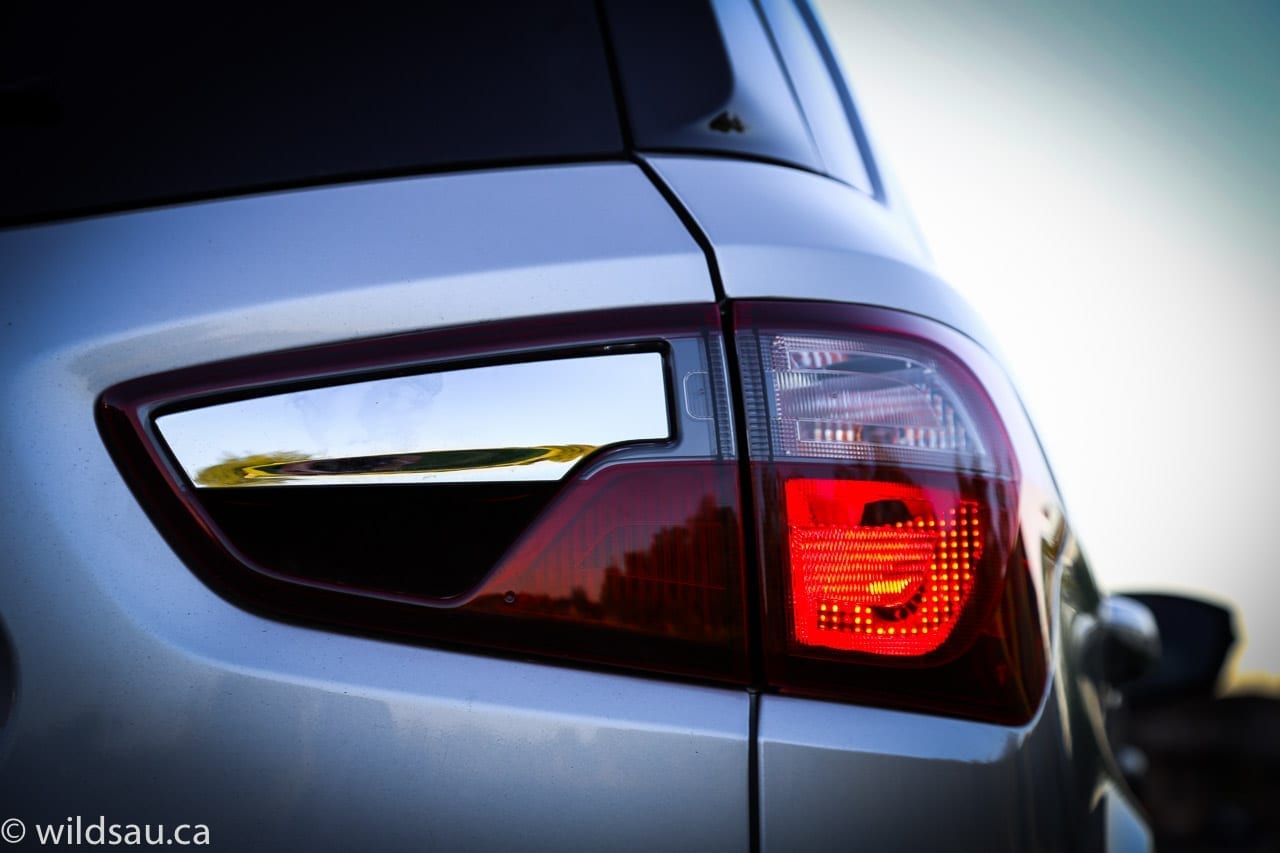 Getting into the trunk is interesting in two ways. First of all, and I feel like an idiot for sharing this, it took me several minutes to figure out where the latch was. It’s hidden underneath one of the pieces of chrome trim on the back. And yes, my wife AND my kids found it more quickly than I did. Ugh. Secondly, once you figure out how to open it, you’ll find the tailgate is left-side-hinged so it swings out away from the curbside. That takes up more space than a top-hinged tailgate obviously, so something to be aware of if something is situated or parked behind you. I found the space to be reasonable for such a tiny vehicle. At 592L, it was definitely usable. The adjustable floor is a neat way to flex your space. If you set the floor panel to the higher position, it makes for an almost flat load floor when the rear seats are folded down (they split 60/40). The cargo capacity jumps to 1415L with the rear seats folded. You’ll also find a removable, retractable tonneau cover. 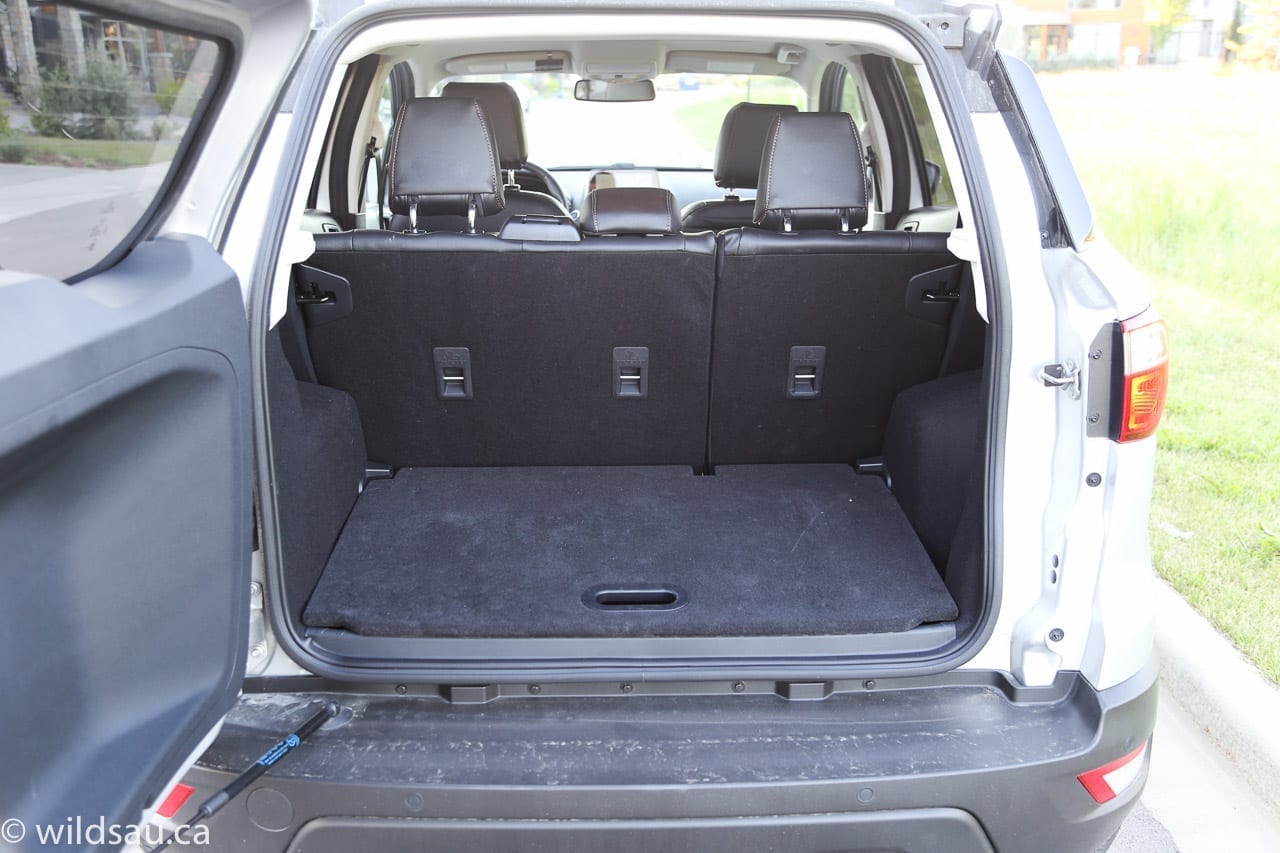 The base engine is a 1L EcoBoost, which I’ve enjoyed driving in the Fiesta. My review sample had the upgraded 2L inline-4 that puts out 167HP and 149 lb.ft of torque. It is paired with all-wheel drive. As you can imagine, the diminutive size of this thing makes it an absolute breeze to park. The handling is surprisingly good (the SES trim gets a sport-tuned suspension) and, for this category of vehicle, it’s almost fun – particularly around the city. The ride, on the other hand, is just OK. It does get a bit harsh at times. The short wheelbase doesn’t help either, and the EcoSport often pogoes around a bit over undulations.

As an entry-level vehicle, I don’t expect the EcoSport to be silent, and it does have a few issues with noise. The engine makes quite a bit of a racket when you step on it, and road noise at highway speeds is significant. Although there’s quite a bit of drama from the engine bay in terms of noise, that’s about the extent of it. Acceleration is very relaxed and the performance is not what I would call responsive. It will hold its own and keep up with traffic and is just fine for everyday driving, but don’t expect any kind of quickness out of the EcoSport.

The unremarkable 6-speed transmission isn’t particularly smooth nor harsh – it does an acceptable job. Gears can be shifted manually with paddles, although the experience isn’t very rewarding, and there’s a Sport mode, which just hangs on to gears longer and is mostly pointless with this vehicle. I did not get to test the all-wheel drive system as conditions were perfectly dry, so I assume the vehicle just stayed in front-wheel drive mode the whole time I drove it. The brakes are fine, and visibility out of the vehicle is mostly good. The one exception would be the huge A-pillars, which are actually big enough to temporarily block your view of a pedestrian on a crosswalk ahead of you.

I found the EcoSport’s start/stop system to be a bit overactive, as it tries to shut down the engine immediately whenever possible. In stop and go commuting, that gets tiring. I found quite a bit of creaking from the rear doors and tailgate over bigger bumps and dips as the body would flex. That is unfortunate, as this was a nearly-new vehicle.

WAF (Wife Approval Factor) was OK. She thought it was a bit toy-like in appearance, but ended up appreciating the ease of driving and parking. She did comment on the creaking noises – they drove her crazy too. All in all, the EcoSport is an interesting choice for Canadians. It’s very small, and we are just starting to feel our way around the tiny-crossover market. We’ll see how it does, I guess. I am going to assume it will be outsold by the slightly bigger Escape for a while, until we realize that little guys like this provide all the space and utility some of us need. I was a tad surprised at the pricing at the upper end on this SES trim as well – that might be a sticking point for some, but the entry pricing is very attractive. 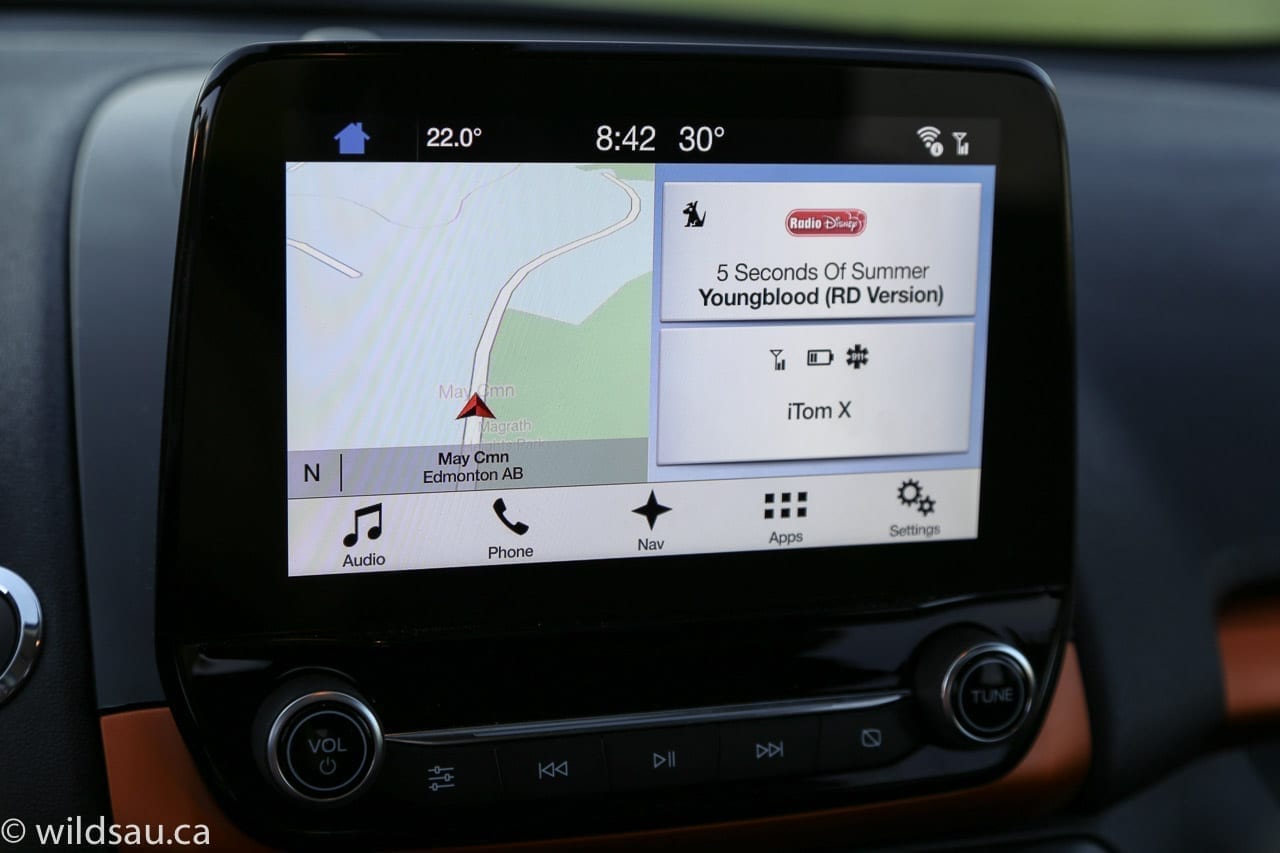