The best version yet of one of my favourite vehicles. Yay! Generally I always tell my kids it’s easier to rip off the band-aid and get the short-term pain over with. That’s why I added the pricing at the top. So yeah… ouch. This is one expensive CX-5 – as a matter of fact, it’s the most expensive CX-5 you can get – the 100th Anniversary Edition. So what do you get for the extra dough? Well there are a few little touches on the exterior letting people know it’s a special edition – there’s a 100th anniversary badge on the cowl, and the wheel centre caps are labeled as such too. The touches are subtle, which I appreciate.

I have long been a fan of the CX-5’s styling and this generation knocks it out of the park. It’s not as fresh as it once was, but it still looks great. It looks at once refined and luxurious, particularly in the right colours, and also aggressive and sporty. It’s a well-balanced design. There’s LED lighting all the way around – headlights, signature and driving lights, foglights and tail lights. The wheel wells are filled by 19-inch wheels (finished in an exclusive gunmetal colour) shod with 225/55-sized tires. Oh, and I must mention another key feature the anniversary edition gets is the stunning Snowflake White Pearl paint. It’s really, really nice. The first thing you’ll notice inside is the equally stunning Garnet Red Nappa leather upholstery on the seats – you can find Garnet Red leather in the Kuro editions too, but it’s not this ultra-high-end Nappa leather. Here you also get the embossed head-rests. The combination makes for some of the most stunning seats in the industry. They are heated, ventilated and power-adjustable, and yes, they’re very comfortable and well bolstered too. Actually the whole interior gets a nice upgrade in this edition – it’s a three-tone theme, with black, white and red all playing a role. It looks fantastic! Materials are nice – there are a lot of soft-touch surfaces and the ones that aren’t are nicely textured and can easily fool the eye. The carpets and floor mats get the 100th anniversary logo, and there are special edition painted panels on the dash and doors. The steering wheel is heated, and sits in front of a set of traditional gauges. While there’s nothing wrong with them, it feels a bit dated when you are seeing digital dashes in vehicles in this price range these days.

Jutting out of the dash is a 8-inch wide-format touchscreen. You can also interact with it using the rotary HMI knob – it’s relative intuitive but I’m kind of over this interface and I hope Mazda updates this system in the near future – many of the options require you to dig through the nested menus and it gets tiring sometimes. The system handles your navigation, phone and the 10-speaker BOSE audio system, which is top-notch with crisp highs and thundering bass. An awesome addition is the wireless Apple CarPlay – this is definitely the future. There are also two USB plugs and an old-school auxiliary audio input. Overhead is a standard-size moonroof, and I wish Mazda would catch up to the competition here – I missed a panoramic roof which would really step up the CX-5’s game. 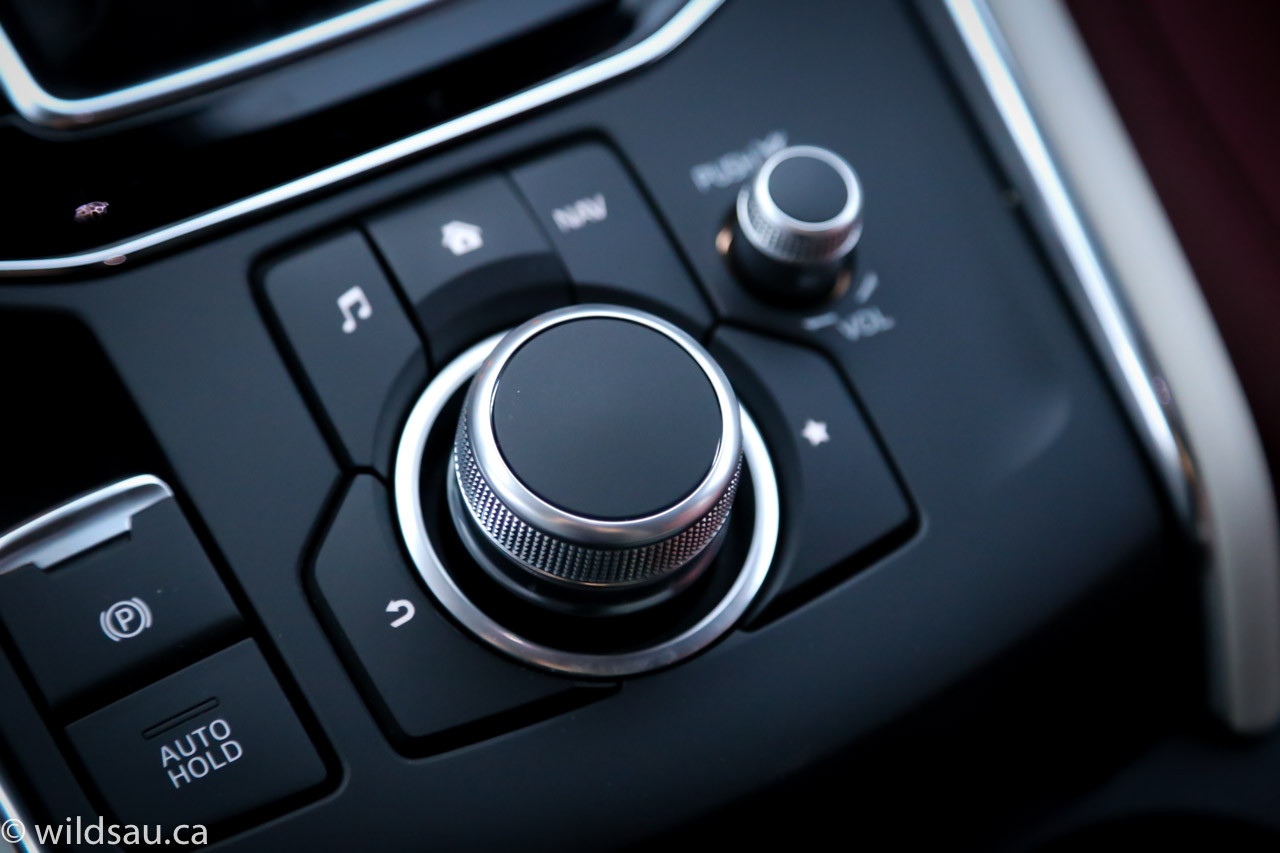 Mazda definitely gets the rear passenger area right. Folks in the back comfortable, reclining seats with good head and legroom. There are adjustable air vents and a middle seatback that folds down to become an armrest – it has cupholders, a nice carpeted storage bin, two USB plugs and the seat heater switches for the two outboard seats.

If you’re transporting little people, there are two sets of LATCH anchors for child seats. There are a few thoughtful places to drop your stuff around the cabin, including an open bin at the front of the console, space under the armrest lid and a glove box. Pop the power liftgate and you’ll find a wide open trunk offering up 875L of cargo space. Of course the rear seats fold down (in a flexible 40/20/40 split), which nets you a huge 1,687L space should you need it. Mazda is still sticking with their tried-and-true 6-speed automatic transmissions and of course there’s an all-wheel drive system to handle the power at all four corners. Mazda rates this drivetrain at 10.8/8.7 L /100 km (city/highway). We ended up with a higher average of 11.8 L/100 km – we are noticing this little turbo engine is capable but it certainly gets thirsty around town.

This engine is adequate for the bigger CX-9, but it’s thrilling here in the CX-5. Step on it and you feel the front tires scrambling for purchase as the prodigious torque threatens to break them loose – within a half-breath, you feel the power transferring to all four corners and the vehicle jets off the line. It’s easy to drive sedately, but boy can this thing haul if you put your foot down. I love Mazda transmissions. Anywhere else, 6 gears feels a bit behind the times and lacking, but in Mazdas, it feels as if they have enough gears. It’s a combination of great ratios, a great pairing with the powertrain and excellent programming. This one is smooth and intelligent.

You can shift gears manually using the paddle shifters or the gear selector – shifts are pretty quick, but the transmission does a good enough job on its own. As you can expect from Mazdas, the ride is firm enough to be sporty, but compliant enough to be comfortable – and it’s exceptionally quiet and well-dampened. Handling is fantastic for a crossover of this size and height, and it’s downright fun to drive. It also gets torque vectoring to add to its athletic abilities.

Braking is outstanding with powerful, easy to modulate brakes all the way around. There’s a nice high driving position and visibility out is excellent. Not only is the ride quiet, the CX-5 remains quiet up to and including highway speeds – the refinement levels are impressive.

This is just an annoyance more than anything, but I hate that Mazda puts the buttons on the key fob on the edge. They have a particularly large fob surface to work with, yet they don’t put anything on it and all buttons are these tiny, skinny things on the edge of the fob. I don’t like that. I also wish that wireless charging would be an option in this vehicle – that’s just becoming the norm these days.

WAF (Wife Approval Factor) was very high. She has always liked the CX-5, and said this was the best and nicest one yet.

She gets no argument from me here. I have mentioned this before, and I have no qualms saying it again – the Mazda CX-5 isn’t just one of my favourite vehicles, it’s also one of my most recommended rides. And this is the best one I’ve been in yet. It continues to marry form with function, and does not require compromise anywhere – it offers all the technology, performance and driving dynamics, space and utility, refinement and beautiful design most drivers want and need. Oh, and if you hadn’t heard, Mazda was number one in terms of reliability this year, beating out the traditional leaders here (Toyota and Lexus) for the first time. That’s a big deal. I can’t really think of many places where I’d make any changes to this vehicle. Perhaps a bigger sunroof, or a more efficient engine, but the overall package borders on perfection. If you’re shopping in this category and the CX-5 isn’t on your shopping list, put it at the very top.