Acura has brought the iconic nameplate back. But does it measure up to its legendary status? Acura’s storied history includes the iconic Integra, an affordable compact car that combined efficiency, utility and fun-to-drive characteristics. It eventually added a four-door model and had various performance-leaning trims, like the GS-R and the legendary track-oriented Integra R, which I consider to be one of the best front-wheel drive cars ever.

Well, the Integra is back – and much like other reincarnated names, it’s much bigger and more advanced than it used to be. Is that a good thing? Let’s find out. 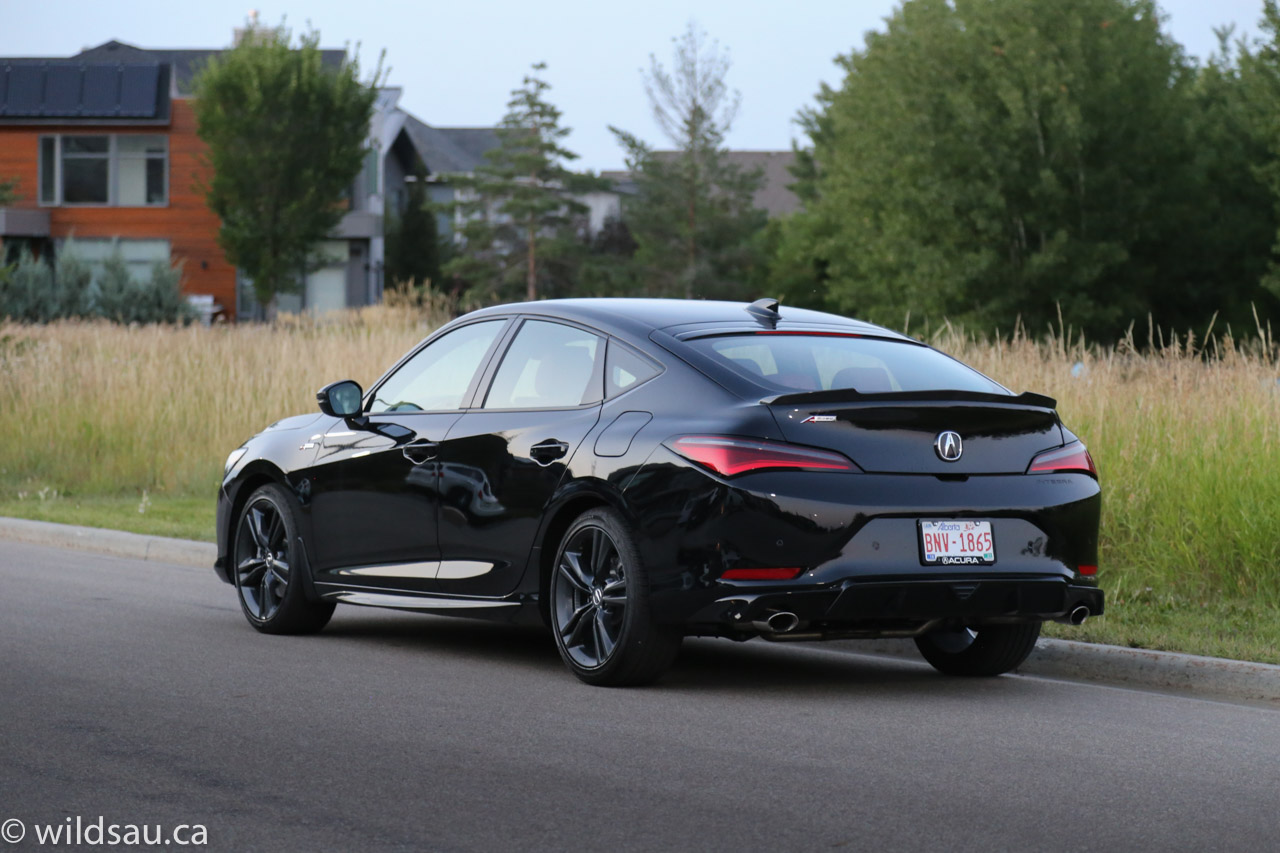 The Integra’s liftback styling combines some style with serious function and versatility. It’s a clean, modern design with some flair added at the front and rear ends, and a hint of muscular aggression from certain angles. Overall, I quite like the look. My black A-Spec trim with dark wheels looked particularly sinister. Flanking the grille are Jewel Eye LED headlights (all the exterior lighting is LED actually) and there’s a subtle rear decklid spoiler that’s just right. It has the appearance of carbon fibre, as do the mirror caps – although I’m sure it’s not real, it does look good. The wheel wells are filled with 18-inch alloys wearing fat 235/40-sized tires. 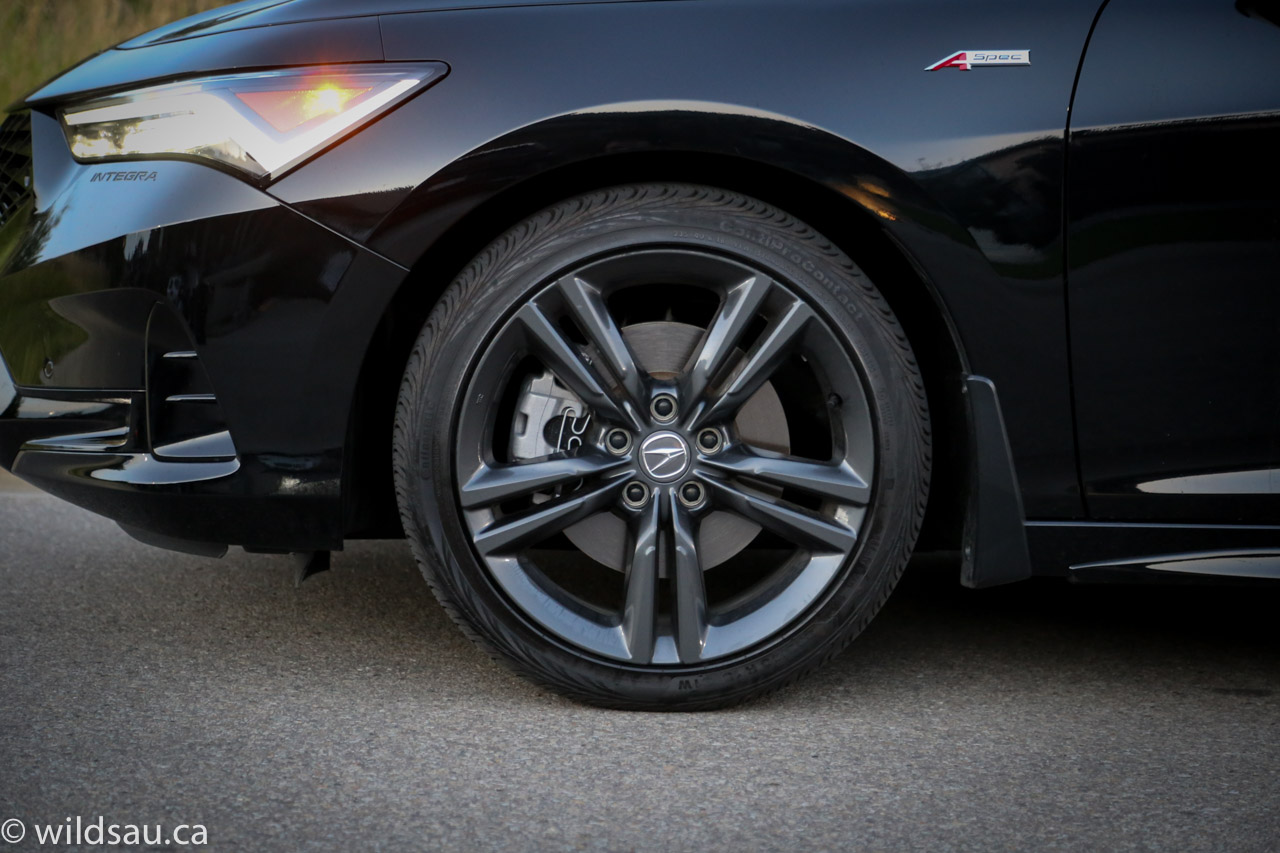 A neat little touch – the Integra name is embossed into the bumper, like it used to be. Love it! I found the car got a lot of looks on the road, with some appreciative nods from other drivers as well.

The cabin is nicely done – it’s clean and modern, like the exterior design. Because this car is based on the Honda Civic, there are plenty of shared points. One of my favourites are the mesh portions that streak across the dash and contain the hidden air vents. Materials are nice – there are plenty of soft-touch plastics and some lovely metallicized plastic trim surrounds, and I enjoyed the asymmetrical layout. The heated and power-adjustable seats are upholstered in slick red and black leatherette and are very comfortable – thanks to the Ultrasuede inserts, they are also very grippy. I also thought the seats look spectacular. Behind the heated steering wheel – which is excellent in hand, by the way – sits a highly configurable 10.2-inch digital gauge cluster.

Front and centre is a sharp, responsive and easy to reach 9-inch touchscreen that handles everything from phone functions to vehicle settings. Apple CarPlay and Android Auto are wireless and worked quite well for me and the ELS Studio 3D sound system with 16 speakers (including overhead speakers and a subwoofer) is spectacular. The fine finishes from the front continue on into the back, which is great. The rear outboard seats are heated and offer plenty of leg room – I probably had 5 inches to spare – but that’s where the roominess ends. I’m 5’10” and my head was hitting the ceiling, so that swoopy roof doesn’t do the interior space any favours. The middle position, as in most vehicles, is narrow and raised and straddles a floor tunnel (which is weird considering there’s nothing driving the rear wheels) – so it’s not a great place to sit. On top of all that, the centre console comes back quite far, taking away even more from the middle seating. That console contains two USB-A charging ports. The middle seatback folds down to become an armrest with two cupholders. If you’re transporting little ones, there are two sets of child seat anchors back there as well. At the front of the console is an open space where you’ll find a wireless charging mat, along with USB-A, USB-C and 12V charging ports. Under the armrest lid is a small rubberized bin. Getting back to the Integra’s liftback styling – it looks like a sedan, but loads more like a hatchback. The trunk is substantial at 688L and includes some surprisingly heavy-duty tie-down points, a collapsible netted area on the left and some decent underfloor space as well. The rear seats fold down in a 60/40 split to add significantly more cargo space.

There’s a weird solid screen that visually covers the cargo space and pops up and out of the way with the trunk lid. It is removable by clipping the four corners in or out, but it’s not retractable. Powering the Integra is a 1.5L turbocharged inline-4 putting out 200 HP and 192 lb.ft of torque, the latter available at a low 1800 RPM. Mine came with the 6-speed manual transmission and the car is only available as a front-wheel drive. Let’s get this out of the way first – the Integra is not a barn-burner. Although the numbers are fine, it’s not the most responsive car out there in terms of straight-line performance, and to be honest, I wished for a real bump in power whenever I wanted to pick up the pace. Is it fine for everyday driving? Of course. But if you want to get going in a hurry, this isn’t the car for you. The shifter isn’t the sportiest thing either, but it’s very easy to live with and so is the forgiving clutch – even with its excellent rev matching abilities, it’s a combination that feels like its much more tuned for livability than performance, and so from an everyday driving perspective, it’s nice. But when you’re trying to accelerate in a hurry, and blasting through the gears, the powertrain as a whole feels like a letdown. In its defense however, and again this supports my theory that the new Integra leans more toward comfort rather than sport, it is exceptionally smooth in how it builds momentum through the entire rev range. That makes it wonderfully driveable, but not particularly exciting. The driving dynamics, on the other hand, are stellar. Oh, before I forget, a special shout-out goes to the shift knob itself – beautifully crafted from steel and leather, it fits the hand perfectly for day to day commuting as well as hard-core gear rowing during aggressive driving.

Acura’s Integrated Dynamic System (IDS) allows the driver to choose different driving modes using a toggle switch on the console – Comfort, Normal and Sport as well as a customizable Individual mode. These alter the vehicle’s throttle response, steering feel, gauge colours and even the in-cabin sound as well as the tuning of the suspension thanks to the adaptive dampers. The Integra’s handling is nothing short of outstanding – the limited-slip differential maximizes traction at the wheels and the car happily hangs on to the pavement during any driving situation. Turn-in is sharp, and the car responds to commands instantly. The ride is firm – perhaps firmer than expected. I also found there was an incredible amount of road noise on certain surfaces, but it quieted down nicely on others – so we know we can blame the tires for that.

I found the braking abilities to be outstanding. They feel powerful and not too grabby. The Integra’s engine sound is excellent – it has a nice little snort to it and much of it is real, as you can hear it outside too. My nitpicks are around what is missing in the Integra, all of which are likely a reflection of its more pedestrian roots since this is a Civic underneath. In my opinion a compact sedan that is sneaking up on $50,000 after taxes should have a surround-view camera and little things like adjustable air vents for rear passengers. Nothing that’s a deal-breaker here, but small annoyances considering the lofty pricing territory we’ve hit with this top-shelf trim.

WAF (Wife Approval Factor) was middling – she thought it looked OK from the outside and that it drove nicely, although she was exclusively a passenger as she does not drive manual transmission cars. So what are our final thoughts on the new Integra? Well, in a vacuum, it’s a great car. It’s nice to look at, inside and out. It’s plenty of fun to drive, although it’s not particularly responsive or quick in terms of straight-line performance. It offers up a bundle of technology and safety goodies. It’s comfortable and very easy to live with.

I think the Integra’s biggest problem is its little cousin – because the Honda Civic Si is literally the same car underneath. Same engine, same transmission, same limited slip differential, etc. Are the interior finishes or the seats as nice? Nope. Does it have adaptive suspension? Nope. Does it look as good? In my opinion, it does not. But is the Integra worth a whopping $10,000 more than it’s mechanical twin? Absolutely not. So the final verdict goes like this – would I like to own an Acura Integra? Absolutely, because it’s a great car. Would I buy one with my own money? I would not, because what it offers over the Honda Civic Si is not worth the difference in price to me.