Quite a mouthful, that car name. What does it all mean? Well, it’s a MINI. That much should be obvious. The model itself is the Countryman – that’s big daddy with four doors. And I’m not kidding when I say big. It’s actually taller than most cars. Next, there’s the ALL4 part – that’s simply MINI’s all-wheel drive system. And finally – the magic. Purported magic, anyway. JCW stands for John Cooper Works. That’s the skunk works outfit for MINI, making their most capable vehicles – tuned for the track, if you were to believe the literature. Typing John Cooper Works just gets hemorrhoidal, so look for JCW from hereon in. What it ends up being, then, is essentially the most expensive MINI you can buy, with the exception of the even more amped-up GP. How expensive? Brace yourself. Hide yo’ wives, hide yo’ children. So, what is it that makes these JCW editions so special? Let’s start under the bonnet, shall we? Here you’ll find a special 1.6-litre 4-cylinder, force-fed by a twin-scroll turbo (thank you, Papa BMW, for your technology). That little stinker puts out 208 horsepower at a lofty 6000 RPM and more importantly, 192 lb.ft of torque. That’s available to you from a ridiculously low 1750 RPM – allll the way up to 5750 RPM. Pretty darn flexible. Haha, you shout, 208 horsepower. That was great, ooohhhh maybe 20 years ago! My awesome 5.0 Mustang made more than that decades ago! Well, that might be. But the secret with MINIs is that they’re small. And light. Usually. Unfortunately the Countryman is a bit of a porker in the MINI world. Being the maxi-MINI and then being further laden down with an all-wheel drive system isn’t easy. It means the Countryman tips the scales at 3307 pounds. Fuel economy is rated at 8.2 L/100 km in the city (29 mpg) and 6.4 L/100 km (37 mpg) on the highway. Respectable numbers. I tried two very different ways of driving this thing. For the first part of the week, I drove it hard. I barely gave it a break. And I averaged 11 L/100 km (21 mpg) – not bad at all, considering I bagged the snot out of it continuously. For the last few days, I reset things and drove much more reservedly. I wouldn’t say I grannied it, but I tried to drive economically. And I ended up averaging an impressive 8.7 L/100 km (27 mpg) – that’s basically all city driving, most of it bumper-to-bumper commuting. Unfortunately Mr. John Cooper insists on guzzling premium fuel from his 47 litre tank.

This is what it’s all about then, right? The driving experience. There’s no other reason someone would shell out thousands over the normal Countryman unless they were getting something very special on the road (and track, as MINI keeps reminding us in the JCW material) The engine is powerful, there’s no doubt about it. Irritatingly, though, it’s very weak until it’s on boost. Getting through that first 2000 RPM can seem like an eternity when you’re trying to launch the car cleanly and quickly. It’s a wet dishrag off the line, but once it hits its stride, look out mama! On boost, the little 1.6 is a screamer, and it pulls hard almost to the redline. It feels like it runs out of steam just before, but then it’s ready to pull through another gear. But the thing is – how often are we revving our cars through the gears? I wish it had a little more oomph off the line for everyday driving, because that’s where it feels a little weak for a second. Again, it’s not a slow car, but at 7 seconds for the 0-60 mph run, it’s not particularly quick either.

I found the transmission to be fine. Its clutch is decent, and doesn’t require too much effort. In addition, it has a reasonable take-up so daily commuting isn’t too painful. But it has a long ways to go to catch up to the leaders in smoothness. It’s a very notchy feeling gearbox but I liked the short throws. Oh, goodness, I almost forgot about the handling. Well, it’s … alright. “Come ON!”, you scream, “it must be track-ready!” Well, it’s not. The Countryman is a big, tall and relatively heavy car. Those characteristics don’t help it around corners. There’s a palpable top-heaviness whenever you bite into a corner. To be clear, the car does handle well, but it doesn’t feel nearly as go-karty as you would expect from a MINI. Especially a tuned one such as this. Should you hit some bumps mid-corner, or perhaps launch off a crest or two at high speed, you’ll be challenging the car’s suspension as much as your sphincter’s ability to perform its role as a floodgate.

And what happens when we tune suspensions for handling performance? You’re right! Let’s all say it together. We compromise. In this case, the ride is terrible. I can honestly say this car is one of the worst-riding vehicles I’ve been in in a while. It simply rides like a truck. It heaves and bucks over road irregularities. Hit something with a hard edge like a big pothole, and the impact will crash through the cabin with a more jarring sound and feel than I’ve ever experienced before. Drive over a series of ANYthing that isn’t smooth pavement, such as expansion joints, and you’ll be calling your dentist to have a look at your newly-minted chipped teeth.

The front-wheel drive based all-wheel drive system is quite good, and I found it to be invisible during normal driving and highly effective during aggressive driving, adding an air of neutrality to the MINI that you’ll miss when you’re pushing one of the front-wheel drive MINIs around the corners. It’s a well-done AWD. Stability and traction control are fully defeatable. Just sayin’. There’s also a Sport mode, which adds a little molasses to the steering feel and slightly remaps the throttle response. Brakes were awesome, and the visibility out is terrific other than the rear headrests blocking a bit of your view.

Nobody really cares about top speed here, but this one surprisingly tops out at 205 km/h. Lower than I expected, but a non-issue since I don’t drive at that speed. Often. Trust me, you wouldn’t want to be driving anywhere near that speed in this car though – because it’s noisy. I mean really noisy. At highway speeds, I was basically unable to hear the passenger speaking over the road and wind noise. The drivetrain is in there somewhere too, but you won’t hear much of it over the other cacophony at higher speeds. It really wouldn’t be fun on a longer road trip. What can I say about the Countryman JCW? Well, its lowered stance and striking appearance with its red roof and mirror caps and contrasting stripe package certainly make it stand out from the crowd. The JCW package adds an aero kit. This includes an aggressive front end with air ducts and fog lights and a rear fascia dominated the big “sport bumper”, massive dual tailpipes and a rear spoiler. The optional 19″ rims look just fantastic, and really complete the look – they’re wrappped in juicy 225/40-sized rubber. This car gets a ton of looks and plenty of thumbs-ups. I was accosted by more females than in any other car, and virtually every other MINI driver waved for me to roll my window down so they could yell something like “That thing is awesome!”

While it’s in-your-face, I found it the JCW Countryman to be on the good side of tasteful-aggressive and instead of getting tacky, I believe it to be more handsome than the normal Countryman.

Inside, you’ll find a spacious-feeling cabin. There’s good headroom and it feels airier than it is because of the dual sunroofs. By the way, you can tilt open both panels, which is totally cool.

The Countryman’s materials are alright, but the quality and fit and finish is definitely behind the competition. Design-wise, things are getting a little stale. EVERYthing is round inside. The vents, the instruments, the door handles, the …. you name it. Even my kids said it was “too much circles”. The heated manually-adjustable black leather seats with red piping are beautiful to look at and comfortable to sit in, but I found them quite slippery and not very supportive for sporty driving – a strange combination for a performance-oriented car. The JCW has a good steering wheel – behind it is a free-standing tach. The massive speedometer in the center of the dash has always been goofy to me. The driver can’t really see it very well so it serves little purpose other than being a nod to tradition and allowing all your passengers to critique your speeding. Yes, that happened. I was like “YOU KNOW WHAT? YOU CAN ALL JUST KEEP YOUR EYES ON THE ROAD!” In the center of the mega-speedo is a small screen that manages the media system, navigation, phone and vehicle settings – it is controlled with a couple of buttons and a rotary joystick that takes some getting used to but ends up working pretty well. Oh yes, that Harman/Kardon system sounds very good. You also get an automatic climate control system. The JCW package also gives you some badging – on the steering wheel, the door sills, etc. – the add-ons do change the cabin compared to non-JCW Countrymans, but honestly, I’d have to say the change in terms of wow-factor is very marginal.

You’ll find a few options for storage – small door bins, glove compartment, dual cupholders and the weird center rail that allows you to customize with things like sunglass holder, etc. I haven’t talked to a MINI owner yet who says that rail is a good concept. The trunk starts out at a small-ish 350 litres, but the shape of the space is useful. There’s also a significant amount of underfloor storage. Flip the rear seats down (they split 40/20/40 allowing for a lot of flexibility) and you’ve got 1,170 litres. The back has three seats. The two outboard seats are comfortable although quite flat and slippery – headroom and legroom are good. The middle seat sucks and straddles a floor tunnel making it very uncomfortable for any human being. There are two sets of LATCH connectors for child seats. Our three kids felt quite squished in the back, but families with two kids would be fine here. I was pretty excited to spend a week with the JCW Countryman. But alas, the compromises that the performance improvements brought about were more than I could bear. It’s a good car, but for the additional money the JCW version costs, I didn’t feel that I got a fast enough car out of the deal. Not only that, but the ride is truly taxing on a day-in and day-out basis. Add to that the amount of choices you have at the nearly $50,000 mark and it seems like this is a very expensive toy. Sure there are practical parts to the car, but all of those can be had for a lot less in the regular-spec Countryman. I really liked the visual package of the JCW Countryman, but I wouldn’t consider buying one. I’ll bet there are plenty of MINI fans that will disagree with me though. WAF (Wife Acceptance Factor) was quite low. Although she liked the exterior styling, she didn’t like the inside. She said it felt pretty “cheap and gimmicky”, and she complained about the excessive road noise. The car’s ride was the final straw.

The MINI Countryman ALL4 JCW. Cool to look at. Not as cool to own. Especially if you have to pay for it. 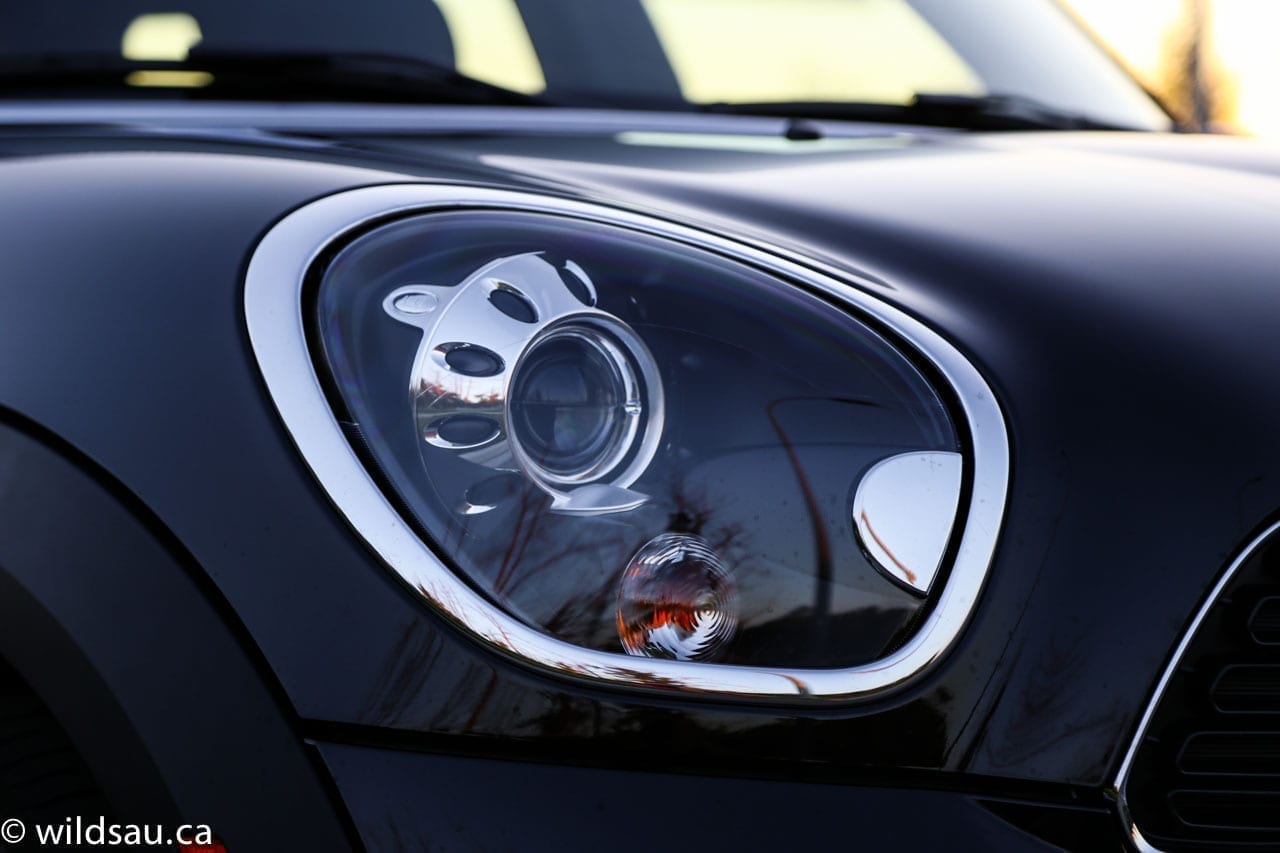