I’ve just spent a few days in Vancouver and got to test drive Mitsubishi’s new (to Canada) Outlander PHEV. What the heck is PHEV, I hear you asking? It stands for Plug-in Hybrid Electric Vehicle. I’m not sure which is harder to say, the acronym or the actual phrase. 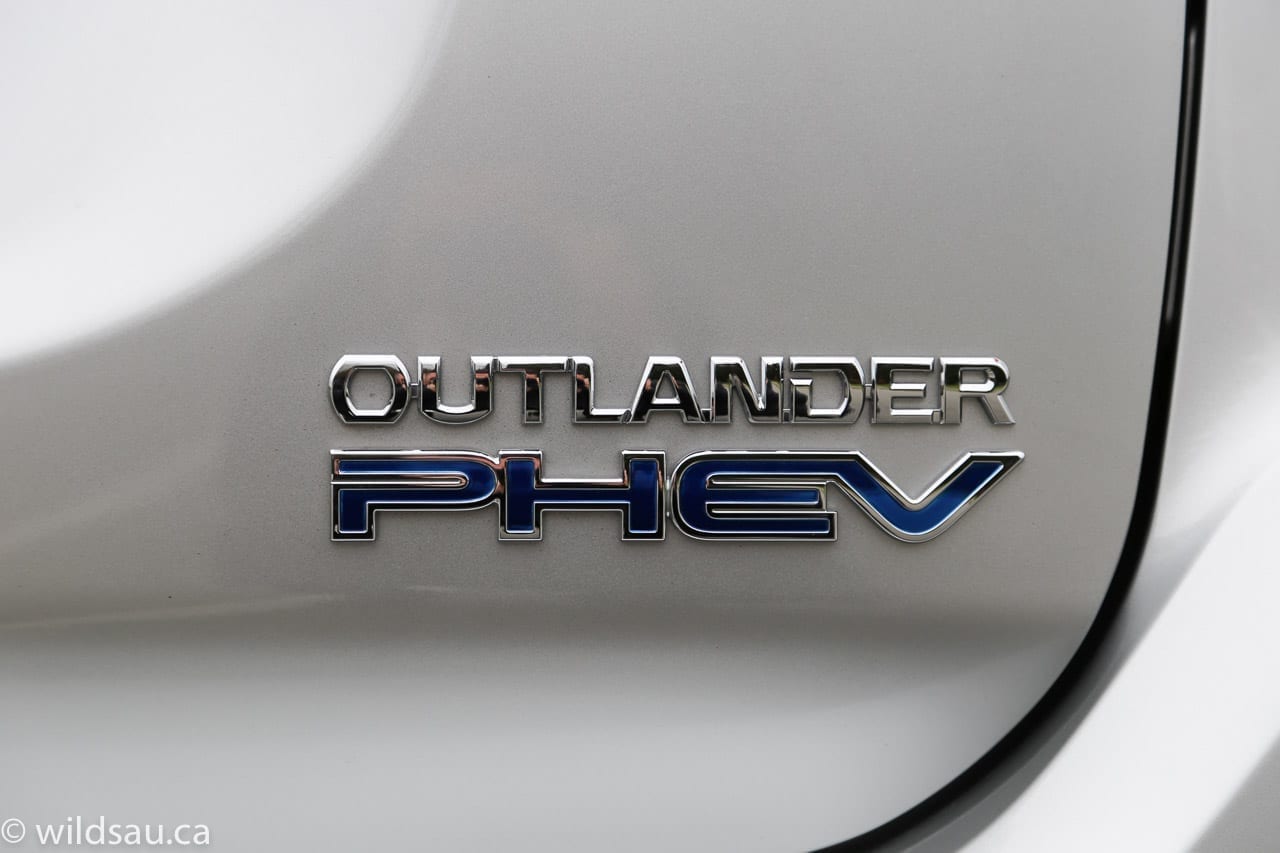 So this vehicle isn’t actually new. As a matter of fact, it was first sold as a 2014 model in other parts of the world. This is the latest version, of course, and boasts numerous improvements from the 2014 Outlander PHEV. Mitsubishi made a big deal about this vehicle being the best-selling PHEV SUV in the world. As a matter of fact, Mitsubishi has sold more than 100,000 Outlander PHEVs in Europe to date. That’s quite impressive!

The other thing they made a big deal about was that it’s the only PHEV SUV to offer all-wheel drive in full electric mode. Others require the gas engine to fire up so it can power one set of wheels. So how does the Outlander achieve this? It has a unique two electric motor drivetrain. There’s a 2L 4-cylinder gas engine, good for 117 HP under the hood. Next to it is a large generator, and then there are two electric motors – each putting out 80HP – one at the front, one at the rear. Strangely, and somehwat irritatingly, Mitsubishi’s parent company has still not released the combined horsepower rating for this vehicle. It’s not as easy as adding the numbers together of course, but consumers look at that number – whether it really matters or not. There are three drive modes – full EV, which has a claimed (under ideal circumstances) range of 35 km; series hybrid mode (where the vehicle continues to be driven by the electric motors and the gas engine is running and operating only as a generator to supply additional electricity – this would apply when your battery charge is low, for going uphill and for passing below 120 km/h) and parallel hybrid mode (where the vehicle is driven by the gas engine, and assisted by the electric motors as needed – you’d see this mode above 120 km/h on the highway or when you really floor it). The transition between them is completely automated, seamless and requires no input from the driver.

We did some city driving around Vancouver and the EV mode is remarkably smooth and serenely quiet, and there was plenty of power on tap. You can see your electric (and gas) range in front of you as well as on the main screen. The driver can also switch between different priority modes. The EV Priority mode uses battery exclusively until the battery is discharged or if you are traveling over 120 km/h. The Battery Charge mode allows you to charge the battery using the gas engine while you are driving – an ideal application would be during highway travel, where the gas engine is the most efficient – in this mode, the system will charge the battery up to 80% in 40 minutes of driving, allowing you to return to EV driving when you’re back in the city. And finally there’s the Battery Save mode, which maintains the battery’s state of charge, so you can use it for full EV driving later. Mitsubishi has given the Outlander PHEV a very flexible regenerative braking system that allows for fantastic driver interaction. If you want to be engaged and try to drive as economically as possible, you can access 6 levels of brake regeneration (0-5), Level 5 being the most aggressive. You do this via the paddles on the steering column and it feels very natural, much like gearing down a transmission. As you choose more aggressive levels of regeneration, the deceleration becomes more and more pronounced – Level 5 slows things down so much that it actually activates your brake lights. It was plenty of fun and a great way to stay engaged in the fuel economy maximization exercise. As a matter of fact, on one downhill run we were able to add a full kilometre to our range through the regenerative braking alone. And of course, you can leave things alone and trust the vehicle to do the regeneration for you while you’re braking or coasting. There are three levels of charging ability – your normal household plug, which will take 8-12 hours for a full charge, pending on the amperage of your outlet. Level 2 charging requires a dedicated charging station (which you’d need to have installed at home, but will commonly find at public charging stations) and it takes 3.5 hours for a full charge. And finally, the Outlander does come with Quick DC charging, where you can top up 80% of the battery in 25-30 minutes. Several journalists on this trip confirmed this was as advertised when they hit up a public charging station in Squamish. The charging port is on the passenger side, on the rear quarter panel – basically opposite of the gas filler door. This is a bit unusual – the typical PHEV situates the charging door ahead of the driver’s door on the front quarter panel. Neither is better or worse, in my opinion – they both work fine. It was pouring rain during most of our time in the Outlander. The S-AWC (Super All-Wheel Control) system – which can shift torque from front to rear and from side to side – was outstanding, always providing ample grip around the rain-slicked mountainous curves while remaining invisible. There is no power loss because there is no drive shaft to the rear wheels – they are powered exclusively through their own electric motor. The default mode is automatic, so the Outlander is front-wheel drive until you need more traction. But you can lock it into full-time all-wheel drive mode using the button on the console.

Mitsubishi demonstrated the EV Remote system app for us as well. It’s a great addition, allowing you to check your battery charge level, set the timing for your charging (to use the cheapest electricity rates), set a timer to start the heating or cooling (so you can get into a comfortable vehicle) and other functions. The app is free and available for iOS and Android. When it comes to utility, the Outlander PHEV is still a great SUV. You don’t have to give up anything in terms of flexibility and size, which is likely what is foremost in customer’s minds when they buy an SUV. It has the same occupant space as the gas-powered Outlander and actually has slightly more cargo space (there is no third row). You’ll find 861L of space behind the rear seats. If you go through the somewhat tedious (by today’s standards) three step process of folding them flat (drop the headrest, pull the strap that pops the seat cushion and sends it careening awkwardly forward into the footwell on two spindly-looking spring-loaded arms and then pull down the seat back), you’re rewarded with 2,209L of room. As mentioned, I never felt there was a lack of power for any of the driving we did. It’s no rocket, of course, but it’s not underpowered. When the gas engine did start, it was extremely smooth and only noticeable because of the added noise. But it’s well damped, and sounds like the engine is far away. I thought the Outlander was very good from a NVH (noise, vibration and harshness) perspective. And it handled very well. The styling of the Outlander is now familiar, as we’ve seen this model for a few years. I find the overhangs are a bit too big for my liking, especially the rear one which gives it a bit of a bubble butt. The LED head lights and fog lights are a nice touch. But it’s a decent-looking SUV that’s not going to offend anyone. If you’re wondering how to tell the PHEV apart from its gas-swilling counterparts, it’s not easy other than spotting the big PHEV badging. Other than that, the PHEV gets its own special 18-inch rims and the lower cladding is body-coloured rather than black plastic, which definitely gives it a more upscale look. When it comes to the interior, I feel that the Outlander has fallen a bit behind the competition. The materials are reasonably nice, with plenty of soft-touch stuff – but it feels cheap in some places. The doors are tinny and hollow-sounding when you slam them closed – I say slam because it took several tries for my driving partner and me to get them closed on several occasions. There’s all the comfort and convenience you’d expect in a mid-level SUV, particularly in the GT trim we were driving. Heated leather seats and steering wheel, a touchscreen that integrates nicely with Apple CarPlay and Android Auto (and has plenty of information screens regarding your EV driving), a sunroof and a 710 watt Rockford Fosgate sound system. There’s also plenty of driver assistance technology – blind spot monitoring, rear cross traffic alert, forward collision mitigation, adaptive cruise control, lane departure warning and a multi-view backup camera. The gear selector is very Prius-like in its operation. It takes a couple of tries to get used to it, and then it becomes a habit. After the theoretical 35 km EV range, the Outlander PHEV is rated at 9.4/9.0 L/100 km (city/highway). Once you’ve exhausted the battery charge, you can keep cruising with a frugal hybrid and there’s no range anxiety as you can always fill it with gas. Also, if your commute fits into the EV range and you have charging ability at work, you could commute both ways without using a drop of gas. Which would make this a very efficient ride indeed. So where does this Outlander PHEV fit in? It occupies a very small niche, but it is a decent offering here. Lots of utility, uncompromised performance on the road and it provides outstanding fuel economy. For the record, we drove around Vancouver and then up to Squamish on the undulating and endlessly altitude-changing Sea to Sky Highway – not a very fuel-economy friendly route. We had a full charge in the battery, which we completely used up of course, and at the end of our trip, after driving much of the route in hybrid mode, we still ended up with an overall average of 5.9 L/100 km. In a big SUV that we weren’t driving efficiently. That’s impressive. For the eco-minded buyer, it’s a good option – especially if you’re in one of the provinces where you get a rebate. Speaking of Squamish, if you’re in the area, definitely take the Sea to Sky gondola. It’s a beautiful trip up the mountain, and the views from the top are exquisite. This time around, we were above the clouds, and while it was pouring rain at the bottom, there was a ton of gorgeous fresh snow at the top. An amazing experience. The Outlander PHEV is available at dealers now and pricing for the three available trim levels is as follows: