An all-new Tiguan with an all-new set of priorities. It’s been a long time since we first met the VW Tiguan. It was 2007 and the compact crossover category was much younger. The Tiguan established itself as a decent little crossover that was more fun to drive than most of the competition. Unfortunately for the Tiguan, it didn’t get a lot of attention since then short of a mild refresh a few years ago. But it remained largely unchanged for nearly ten years, and it has certainly shown its age as of late. Enter the 2018 Tiguan. You’ll barely recognize it. It’s all grown up now.

It looks like VW has been listening and watching where consumers are putting their hard-earned dollars. Extra space inside seems to matter to many of them, and VW has given it in spades here. The new Tiguan’s lines are familiar. The straight-forward no-nonsense lines follow the current corporate direction. And while it is a sleeker overall design, there’s no hiding that new size. It’s huge, relatively speaking – it’s 27 cm longer than the outgoing Tig.  There’s nothing exciting going on in the styling department, but it’s a handsome vehicle and it should age gracefully. My tester’s retina-searing Habanero Orange Metallic paint won’t be for everyone, but boy did it ever get a lot of looks on the road. The adaptive LED headlights are bright and paint the night with an even white light. The top-trim 18-inch rims with juicy 235/55-sized rubber complete the package. First things first – the Tiguan doesn’t just look big from the outside. It’s very spacious inside, with tons of head room. The Tiguan’s sophisticated two-tone interior is very nice with a solid choice of materials – there are soft touch plastics everywhere – high-end textures and excellent fit and finish. I liked the stitched panels on the doors and seats. Speaking of the seats, the heated and power-adjustable perforated-leather thrones are very comfortable and nicely bolstered too. Behind the grippy, heated flat-bottom steering wheel is VW’s Digital Cockpit, a beautiful all-digital 12.3-inch gauge cluster which offers insane flexibility. VW’s new 8-inch touchscreen is crisp and extremely responsive and the user interface is well thought out. There are only a couple of knobs but the contextual buttons that pop up on screen (based on what you’re doing) work as well as hard buttons would. The upgraded Fender sound system is a treat – it plays with clarity and authority and sounds as good with direct sources as it does with streamed music. The new Tiguan’s rear seats are one of the biggest wins in this new model. They offer generous amounts of head, leg and foot room and the seats recline and slide fore and aft. The outboard seats are very comfortable, and each has a set of child seat anchors. The middle seat is narrow and hard, and there’s a drive shaft tunnel to straddle but it can definitely work for a third passenger. My three kids were perfectly happy back there. Rear passengers get adjustable air vents as well as USB and 12V plugs. Both the front and rear seats feel open and airy thanks to the massive panoramic sunroof overhead. It has a full-length powered sunshade that retracts or deploys in complete silence. Very impressive. And yes, if you feel you need one, there is an optional third row available – it was not optioned in my tester. Interestingly, as the front of the cabin goes more upscale, the new bigger rear seating feels like it got left behind – it’s all hard plastics everywhere. 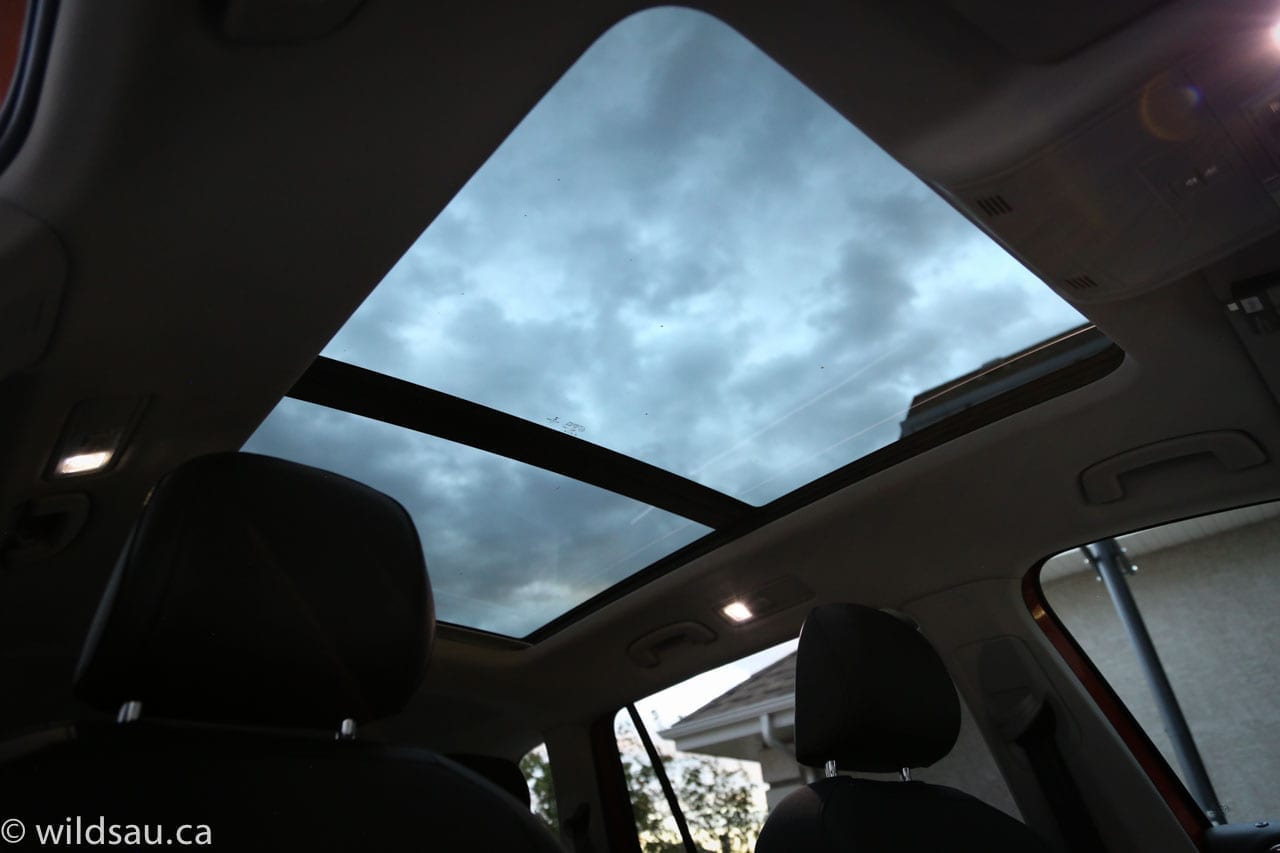 VW doesn’t just offer a lot of space in the Tiguan, they have also added plenty of places to put your stuff. My favourite is the open, angled rubberized bin at the front of the console, where you also find a 12V, auxiliary and two USB plugs. There’s also a tall bin under the armrest lid and a substantial glove compartment. And finally, there’s an open bin in the middle of the dash too, which is my least favourite place to put things. But the real story is what you’ll find behind the power liftgate. Which is a 1065L trunk – enormous, particularly when compared to the previous generation. It is covered by a retractable, removable tonneau cover with a nifty storage slot under the floor. If you need more cargo space, the rear seats fold down in a 40/20/40 split which offers a ton of flexibility – flip them all down and the cargo space grows to a gargantuan 2081L.

The Tiguan’s new 2L 4-cylinder puts out 184HP, which is down from the outgoing model’s numbers, but the torque is up to 221 lb.ft, available at low RPMs. The engine is mated to an 8-speed automatic and VW’s 4MOTION all-wheel drive system. The previous Tiguan, although it was definitely showing its age in the last few years, was always known as an agile and fun little crossover. I’ll say this right off the top – the new one isn’t a fun crossover. But let’s focus on what the Tiguan does well to put this into perspective. It has enough power for most driving situations. It’s peppy enough off the line, and while it’s not particularly fast, it certainly holds its own at most speeds. There’s a drive and terrain mode dial that lets you choose between Normal, Eco and Sport modes, as well as Snow and Offroad terrain programming. Sport mode makes things noticeably more responsive and tightens up the steering, while Eco mode wasn’t nearly as driveable and makes for a sluggish drive around town. I also felt that the transmission got a bit lurchy in Eco mode. Otherwise, it does a fantastic job and seems to be in the right gear nearly all the time. The Tiguan rides very nicely, and soaks up all but the biggest hits quietly and smoothly. The handling is competent enough, but it’s not very athletic and it quickly makes it apparent that it prefers to move in straight lines rather than play. Throw it into a corner and you’ll experience significant body lean. So like I said, the Tiguan is very nice to drive, but it’s not much fun. Hey, it does everything you need on a daily basis and would be an outstanding road-tripper too. Although the all-wheel drive system barely made itself noticeable, I did notice the front tires slip a few times on the rainy roads before the rear ones kicked in. Slip-and-grip systems like this are the norm in this category and work well enough for most situations.

The Tiguan’s refinement continues when it comes to noise suppression. The Tiguan is very quiet in terms of road and wind noise, and almost shocking when cruising at highway speeds. Which is why the amount of engine noise (but only when accelerating) comes as a bit of a surprise. The little 4-cylinder makes a bit of fuss when you step on it, particularly when the engine is cold, and the clatter sounds a little like an old diesel from inside the cabin. This is by no means a deal-breaker, but considering how refined the rest of the vehicle feels, this surprised me.

Visibility out of the Tiguan is very good and I found the brakes to be powerful enough to haul things down when required. I found the engine’s auto start/stop feature to be a bit rough at times – you can turn it off. WAF (Wife Approval Factor) was exceptionally high. She loved the drive, the spaciousness and the price. She said that this would be a good fit for our family.

Judging by the amount of interest my friends, neighbours, social media contacts and just people on the street exhibited in the Tiguan, it felt like people have been waiting for something like this. And after spending a week with it, I feel that VW has a winner with the new Tiguan. Volkswagen built a crossover that checks off virtually all the boxes for most buyers, and has done so while remaining competitive on price. If you want that sporty driving experience, it won’t compete with the Mazda CX-5 or the Ford Escape. But the new Tiguan is comfortable, enjoyable enough on the road, and it certainly delivers when it comes to utility and function, and easily competes with the Honda CR-V and the Toyota RAV 4. I highly recommend putting the new Tiguan on your compact crossover shopping list.