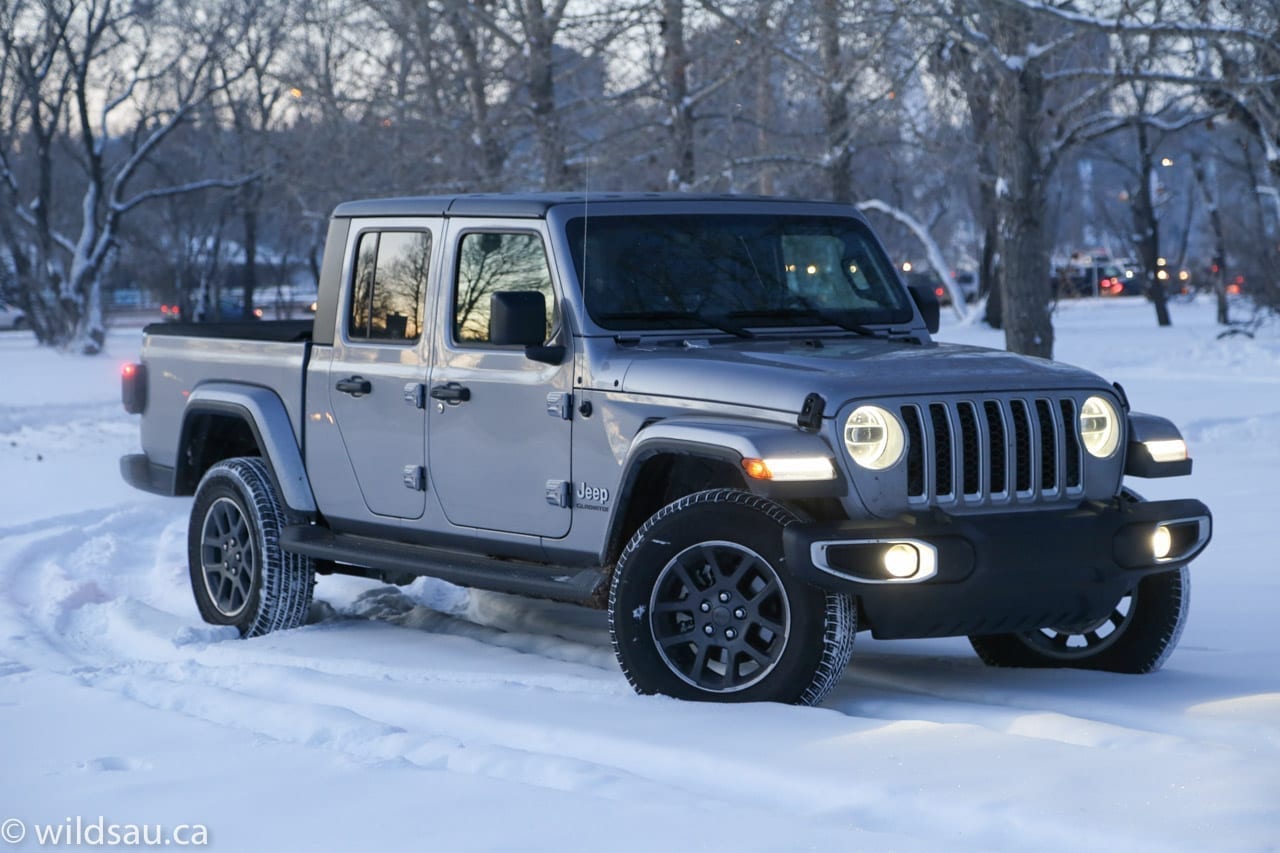 Yeah, let’s just get that out of the way, because the pricing, in my opinion, is the Gladiator’s biggest weakness. You can still step up to the trail-eating Rubicon which adds thousands more to the price. There wasn’t a single person who wasn’t completely shocked at my review Gladiator’s price. I’m guessing that’s the same thing that’s happening in dealerships too.

I do love the looks of this thing. It’s aggressive and tough, with all the key Wrangler bits in place (from the front, you can’t tell it’s a Gladiator) and a squared-off mini-Hummer-truck profile from the back. It retains those purposeful fenders and that unique combination of ground clearance and stance.

With the LED lighting group, you get LEDs everywhere. Headlights, turn lamps, tail lights, fog lamps and those cool corona running lights. And those LED headlights are exceptional, painting the night landscape in an even bright white. My Gladiator had nice painted 18-inch wheels that worked well with the paint colour.

The looks are polarizing, to be sure. Most people really liked it, and some hated it. But it got more attention than I have ever received in another press vehicle. People got up in restaurants to go outside and get pictures of it. I busted a few guys posing in front of it, making faux gang signs, with their friends taking their pictures. Girls came up and cooed over it, saying they would want this new Jeep. It seems to have relatively universal appeal, and even Wrangler drivers generally took a long, hard look at it, and always sent me the “Jeep wave”. The cabin is nothing new if you’re familiar with Wranglers. The stubby dash and the upright windshield are taken directly from that vehicle. As is the styling. And that is, by far, the best we’ve ever seen in a Wrangler or Wrangler-based product to date. Ergonomics are actually taken into account, build quality is reasonable (although there were definitely some meandering gap spaces between some of the trim and the main panels) and materials are really, really nice. Take, for example, the dash – here, it’s wrapped in stitched soft leather-like fabric and takes things to the next level. Soft plastics abound, but remain easy to clean along with the harder plastics. The heated steering wheel is a delight to drive with and look at – behind it are a couple of traditional gauges split by a driver information screen. The heated leather seats are quite comfortable and decently bolstered, and are manually adjustable. Yep, even at $64,000. The easy-to-reach Uconnect 8.4-inch touchscreen still makes me happy – it’s slowly showing its age but works very well and never left me wanting for something. The “premium” Alpine sound system is fine, although it barely competes with most other decent systems and certainly doesn’t stand out. On the centre stack, below the screen, you’ll find all four power window switches – a quirk owing to the fact that the doors are removable and they needed to put those switches somewhere. There’s a bit of driver assistance technology – you get a back-up camera, rear parking sensors, rear cross-traffic alert and blind-spot monitoring. This feels a bit sparse considering the asking price.

The rear seats are quite upright and not nearly as comfortable as the front ones. At 5’10”, I did have enough head and leg room and my three kids were relatively happy back there. The middle position isn’t that great as it’s more cramped in every way. Rear passengers get adjustable air vents and two USB-A and two USB-C plugs. There are cupholders on the console, as well as two more in the middle seatback, provided you fold it down to become an armrest. If you’re transporting child seats, you’ll find anchors for them on either side in the back.

You can fold the rear seatbacks down to make a sort of big parcel shelf across the back, or you can fold the seats up and out of the way, creating a fairly large cargo space in the back. There’s a tiny cubby in the centre stack, along with a bunch of plugs – a 12V, auxiliary port, and USB-A and -C plugs. Lift the armrest lid and you’ll find a dual-level storage bin. The door pockets are mesh, and there’s a narrow glove compartment too.

They’re optional and not cheap, but I loved the removable and lockable underseat storage bins in the back. They are accessible when you flip up the rear seats, and like the bench itself, are split 60/40 into separate compartments. The venerably Pentastar 3.6L V6 continues to do its duty here. It puts out 285 HP and 260 lb.ft of torque. My Gladiator had the optional 8-speed automatic transmission and of course there is the Command-Trac part-time 4×4 system. The standard transmission is a 6-speed manual.

The Gladiator is no eco-fuel-miser, and Jeep rates it at 13.7/10.7/12.3 L/100 km (city/hwy/combined). I averaged a horrifying 18.5 L/100 km during my week with it. In the Gladiator’s defense, I spent nearly the whole week in 4×4 and drove very slowly, commuting through terrible winter conditions in temperatures -30 or colder the entire time. But still, that is some of the absolute worst fuel economy I’ve ever seen, and that includes the mighty Ford Raptor – after we went off-roading! So I suspect that even during ideal conditions, the Gladiator isn’t going to win any fuel economy awards.

Jeep tries telling us this is its own vehicle, but for the most part, this is a Wrangler with a longer wheelbase and a box. Therefore you can say it drives like a typical Wrangler, except it doesn’t quite handle as well and it’s not quite as snappy of an accelerator. That said, it has power enough for all driving situations. And the ride is surprisingly comfortable, to be honest. There is some harshness over certain road irregularities, but the payoff is, of course, a suspension that can soak up most of the biggest off-roading hits you can throw at it. There’s quite a bit of play in the centre of the steering which takes getting used to, and it is never fun at higher speeds. The transmission is outstanding. I felt it was always smooth and the software seems to manage it very intelligently – it always felt like it was in the right gear. Gears can be shifted manually using the gear selector.

4×4 is selected with a good old manual lever on the console and actually requires a fair amount of heft. As one would expect, you choose between 2×4 and 4×4 high and low ranges. The Gladiator’s braking is powerful and easy to work with. The noise levels are reasonably quiet around town, but once you’re on the highway, there’s no getting around the brick-like aerodynamics and the wind noise is atrocious. Combine that with the aforementioned steering and it wouldn’t make for a particularly fun road tripper. Visibility out of the Gladiator is pretty good, and the high driving position is a beauty – although the B and C pillars are pretty chunky so some shoulder checks get a bit hairy.

This being a Jeep, you can expect it to come equipped to head off the beaten path. No, it’s not a complete rock crawler like the next-level-up Rubicon trim, but it is plenty capable as it is. You get skid plate protection for the fuel tank, transmission and transfer case, Dana axles and 4 (optional) auxiliary switches for a winch, extra lights, etc.

And when it comes to being a truck, although the box is very much on the small side and quite shallow, the Gladiator (optioned as mine was) comes well-equipped in this department too. You get a heavy-duty Class IV hitch receiver and all the required wiring, a hitch zoom on the camera, heavy-duty cooling and a 115V household plug in the box with a 400-watt inverter. The Overland trim can tow up to 6.000 pounds and has a maximum payload capacity of 1,140 pounds. The wireless Bluetooth speaker hidden behind one of the rear seats is a pretty cool touch. It’s hugely overpriced though, but if you head out to the wilderness or the beach a lot, and often use a Bluetooth speaker, this might interest you. It’s got its own charging cradle and it feels extremely rugged.

I didn’t get an opportunity to really head off-road with the Gladiator due to the weather, although I did have some fun in very deep snow – it barely slowed the Gladiator down. I also didn’t remove the doors or the three Freedom Top roof panels, nor did I fold down the windshield (that requires removal of the windshield wipers, by the way). What I did like was the small storage “holster” under the rear seats that provides and clearly labels a place for each set of hardware (doors, roof panels). That way you can keep everything straight when it comes to putting the stuff back on. A neat organizational add-on! Oh boy. OK, so here goes. First of all, the WAF (Wife Approval Factor) was low. Like ultra-low. She didn’t like the looks, the climb up into the cabin, nor the driving experience. Frankly I would say this was one of the least-liked vehicles I’ve reviewed when it comes to the WAF.

So what did I think? Well, I really wanted to love the Gladiator. I was first sold on its looks when they announced them – and I still love looking at it. It checks off all the right boxes for me when it comes to styling. I really enjoyed having the Gladiator for the week. It was a lot of fun, and functioned well as a basic commuter and I loved how indestructible it felt. On the other hand, there are the driving quirks – the noise and in particular the steering floppiness, which made any sustained freeway or highway travel completely joyless for me. Oh, and the fuel economy – that’s going to add up after a while. Oh right, and then we have to discuss the biggest knock of them all – that price. I don’t know at what point Jeep decided they were a luxury brand and were going to price things accordingly. As much as I like the Gladiator and would seriously consider one for my own vehicle if it was significantly cheaper, the asking price for the Overland trim (I wouldn’t consider the Sport trim, and I also consider it overpriced) makes this a non-starter. Too bad, because if Jeep had priced this appropriately, I believe we’d see a lot of these on the roads. From what I’ve heard, Jeep has now started adding some incentives for dealers to move more of the Gladiators that are languishing on the lots. Interesting fact though – even though they’re just a few thousand less, comparable Wranglers continue to sell very well.