We were very impressed when we first met Cadillac’s newest flagship, the CT6. Its new platform revealed a world-class architecture that wowed us with its rigidity, ride and handling capabilities. The good news continued inside where we were treated to a fresh, luxurious take on things. The CT6 soldiers on, doing things very well – but now there is something new to get excited about. Cadillac’s Super Cruise technology is available on the CT6, and our review sample came with it. Although we’ll certainly discuss the rest of the car, our focus in this review is the Super Cruise experience. The first word that comes to mind when describing the CT6 is big. This is simply a large sedan. The styling is beautiful. It has strong modern lines, that exude power and elegance. Surfaces are sculpted and creased, and proportions are ideal for a luxurious rear-wheel drive sedan – a short overhang in front, a big trunk in the back. LED lighting can be found everywhere – the head lights, the now-iconic vertical front signature lighting and the tail lights. Cadillac fills the wheel wells with stunning 20-inch rims for an athletic stance and my car’s Red Horizon paint had enough depth that it felt like you could dive into it. I wish I could have kept it cleaner during my time with it, but our Edmonton weather didn’t cooperate.

The CT6 gets a lot of looks from other drivers and people on the sidewalk, and it got plenty of positive feedback from people that came and had a look at it. The roomy interior is stylish and clean. Materials are very nice – everything is soft-touch, everything is clad in stitched leather-like material and the high-gloss Sapele wood trim is gorgeous. I appreciated striking visual touches like the “Fine Twill Weave” carbon fibre trim on the lower edge of the dash and the perforated leather surrounding the touchscreen. It all works well and looks great. I loved how the heated steering wheel felt in hand. The heated and ventilated seats are outstanding in terms of comfort, including for extended highway travel, but I found them lacking when it came to supportive bolstering. With that said, I don’t think the CT6 is going to see a lot of time at the race track. Cadillac’s CUE system is on the 10-inch touchscreen – it can also be navigated using the touchpad on the console, which helps avoid fingerprint smudging. It’s been improved, but still feels like it needs an overhaul. There’s navigation, a dual sunroof overhead and a great BOSE sound system – although you can step it up to the ridiculous 34-speaker BOSE Panaray system too. 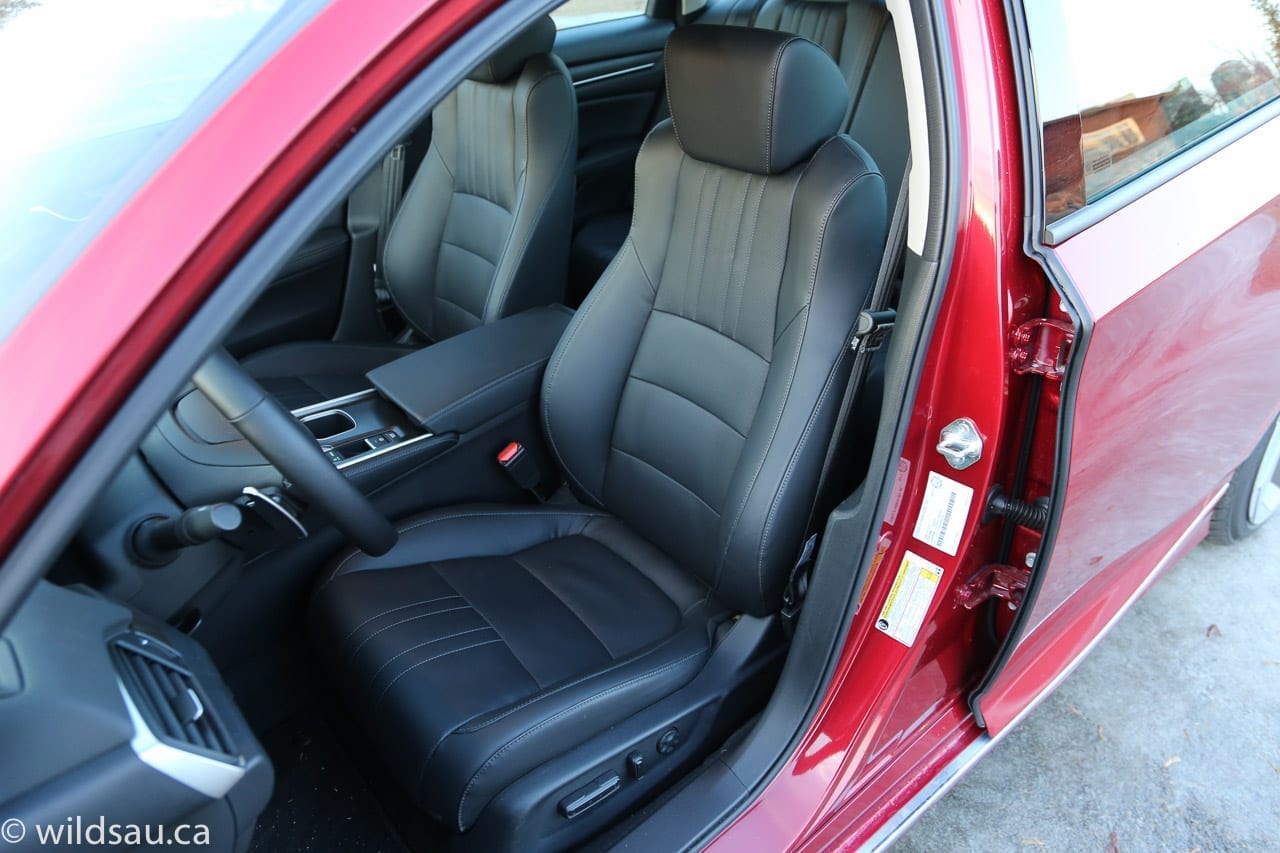 When it comes to driver assistance technology, the CT6 positively bristles with it. Mine had following distance indicator, forward collision alert, front pedestrian braking, blind spot monitoring with lane change alert, lane departure warning with lane keep assist, rear cross traffic alert, surround vision cameras with parking sensors all around, safety alert seat (which sends haptic feedback through the seat to the driver), Teen Driver (which allows you to limit certain features, etc. to ensure your younger drivers are kept from temptation), automatic high beams, an excellent heads-up display and a rearview mirror camera (which gives a significantly increased field of vision). That big body isn’t misleading in any way. Plop yourself into the spacious rear seating area and you’ll find a wealth of head and leg room. The heated outboard seats are hugely comfortable. Passengers also get independent electronic controls for the sunshade in the rear sunroof as well as the rear window sunshade – this led to epic battles between whichever two of my three kids had access to the controls. And it got annoying. But mature adults will appreciate the ability to control these things, as well as the manual side window sunshades. 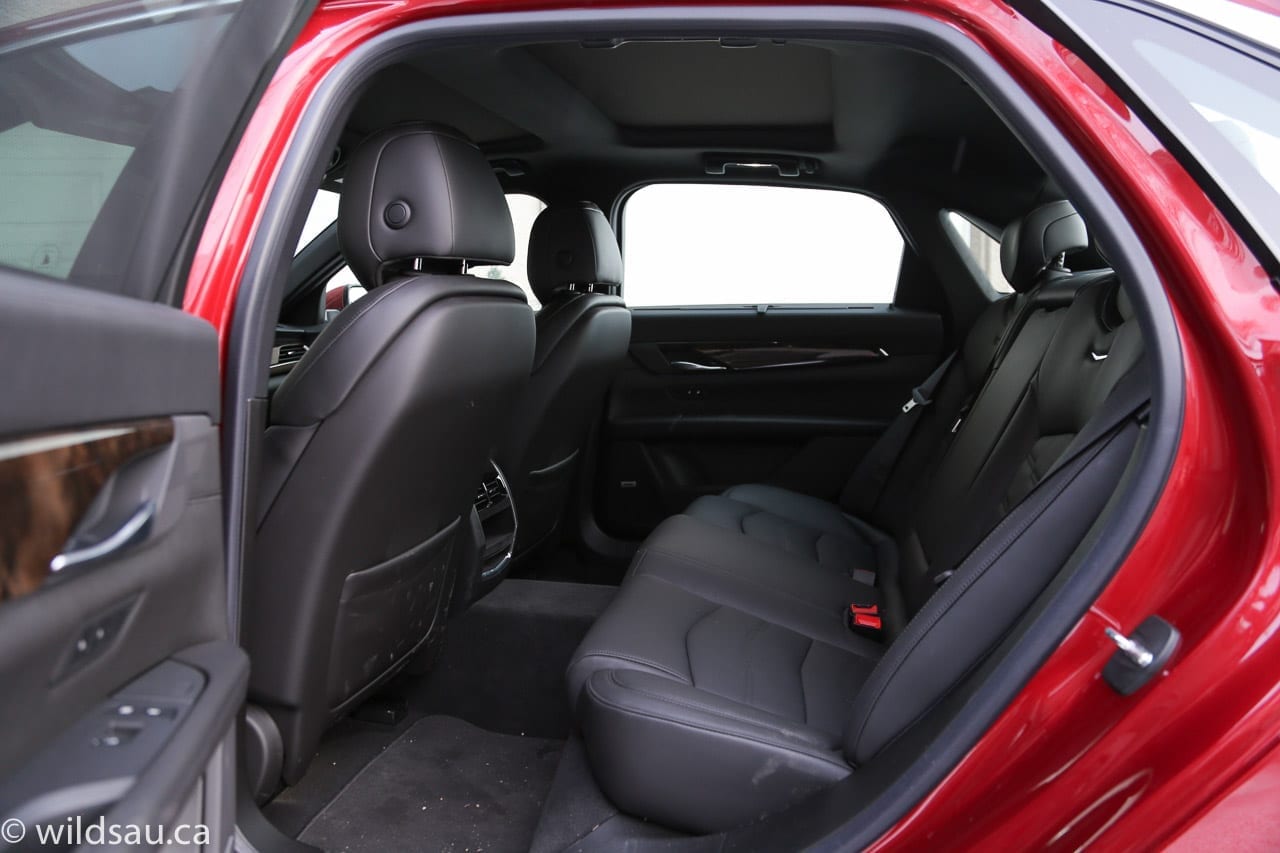 The middle seating position is high and narrow and straddles a monster tunnel in the floor. Thankfully, if it’s not being used, the middle seatback folds down and becomes a lovely middle console. It includes a dual cupholder, a leather-lined tray and a lidded carpeted storage bin. At first, it appears as though rear passengers get nothing more than adjustable air vents, but Cadillac has a nifty trick up their sleeves. They’ve actually included two USBs, one 12V and one 120V household plug (for a total of four charging ports!) from the traditional back-of-the-centre-console location and put them between the rear passengers on the front edge of the seat. Which means they’re closer and you don’t have to look at them. Great solution! Cadillac has put a perfect phone storage slot under the leading edge of the armrest. You can just slide your phone down into there and it rests on a rubberized mat, mostly out of sight – and it’s a wireless charging surface. Unfortunately it’s an older Qi charging standard, so there are a number of phones it doesn’t work with – including the new Apple phones like the iPhone 8 and X. Argh! It’s still a great place to leave your phone though.

There’s a very small compartment under the armrest lid (along with two USB plugs). The 433L trunk is huge, and has a power trunk lid. My CT6 had a 3.6L V6 that puts out 335 HP and 285 lb.ft of torque. It is mated to an 8-speed automatic transmission and all-wheel drive. Cadillac rates this combination at 13/8.9 L/100 km (city/highway). We averaged 13 L/100 km after a week of Christmas season driving – plenty of back and forth in the city, brutally cold temperatures and a few lengthier highway drives. This is the CT6’s mid-level engine. There’s a 2L turbo 4-cylinder available with the rear-wheel drive model, and there’s also a twin-turbo 3L V6 at the top end. This one has plenty of power, and it paired nicely with the transmission. The CT6 has three driving modes – Touring, Sport and Snow/Ice. The modes don’t have a huge impact on the driving experience, but there is a slight change in the responsiveness, the transmission programming and the suspension firmness.

The transmission is a bit sluggish, but its character suits a big luxury sedan. It can be shifted manually using the paddles, but it does just fine on its own. It’s smooth and usually ended up being in the right gear at the right time. When it comes to the CT6’s ride, it soaks up absolutely anything you throw at it. It’s creamy, although occasionally there’s a hint of harshness from the super low profile tires, particularly over things like big expansion cracks on city streets. But overall, it’s sumptuous. Best of all, the active suspension doesn’t ask you to compromise in the handling department – this leviathan will surprise you every time when you throw it into a curve or decide to take a freeway cloverleaf exit at significant speed. It never falters and coupled with a great all-wheel drive system and a surprisingly light curb weight (1840 kg/4057 lb), the car inspires confidence. A fine balance between comfort and performance.

Speaking of comfort, the CT6’s noise levels are astoundingly low. It’s very quiet in every situation, even at 120 km/h, although the V6 makes itself known when you step on the gas – but that’s a good thing. And yes, it’s “enhanced” which means the engine sounds are artificially bumped up through the stereo speakers. The engine’s start/stop technology is excellent – I never really noticed it. The car’s brakes are powerful and the visibility out of the car is great. OK, let’s talk about this technology. Super Cruise is an option package, and it includes quite a bit of driver assistance tech, much of it related to the car’s semi-autonomous driving ability. It’s certainly not a prohibitively expensive package, and it includes night vision, adaptive cruise control, front and rear automatic braking, the magnetic ride adaptive suspension, active rear steering and those spicy 20-inch rims.

Cadillac calls Super Cruise “a hands-free driving technology for use on limited-access freeways”. It is essentially an extension of the adaptive cruise control, taking it to the next level by adding steering. It combines interior sensors for the driver attention system, exterior front and rear sensors, advanced GPS and precision LIDAR-scanned map data. It won’t let you activate the system unless conditions are considered optimal. If you’re on a divided highway and have adaptive cruise engaged, and the system sensors are satisfied, a steering wheel icon pops up on your digital dash – tap the Super Cruise button on the steering wheel and you’re golden. I found Super Cruise immediately instilled a sense of confidence on the highway. It’s very smooth and extremely refined. The adaptive cruise control drops speed in a well-controlled fashion and resumes to the set speed at a reasonable rate. The steering is basically flawless, and the system keeps the car centered in your lane – we didn’t experience a single hiccup. The LED light bar in the steering wheel tells you the system’s status. Once the system is engaged, the light bar glows a comforting green. When you (or the Super Cruise system itself) have decided that it’s time for you to take over the steering (to change lanes, for example – it won’t do that for you), the light bar turns blue when it has relinquished control. It returns to green when you’re ready to settle into your lane or continue along your way. While it’s hands-free, it does require your constant attention. Look away, close your eyes for a nap (or even cover your eyes with something) and the light bar almost immediately starts flashing (green) to warn you. If it doesn’t get your attention, it will start flashing red. If that doesn’t work, it throws in a voice prompt for you to take the wheel. At that point, the system will disengage. If you don’t take over the steering and start looking at the road again for whatever reason, the system simply turns off. It will slow down the car in your lane, come to a stop and contact OnStar.

I didn’t quite understand the value of Super Cruise until I tried it out. It turns out that it’s a very relaxing way to take down long stretches of highway. I found the system trustworthy from the get-go, and once I got used to the feeling of having to watch the road and still do my own lane changes, I became very comfortable with leaving the rest to Super Cruise. It removes the steering factor from the highway driving experience and it is amazing what a difference it can make in avoiding driver fatigue. I would absolutely spring for this option, and I would absolutely use it any time I was on the highway. It worked flawlessly and I loved it! WAF (Wife Approval Factor) was very high. She usually prefers a slightly smaller car, but didn’t mind the driving experience. She said it felt like a very high-end car (which it is) and although she was never behind the wheel during our Super Cruising trials, she was amazed by it and said she would definitely use that feature on road trips.

The CT6 is relatively unchanged since we first met it, but the addition of Super Cruise is a revelation. If you’re in the market for an outstanding luxury sedan with world-class comfort, luxury, technology and performance, put the CT6 on your list. And definitely check off the Super Cruise option box – it’s a winner and it’s at the forefront of the semi-autonomous driving race. 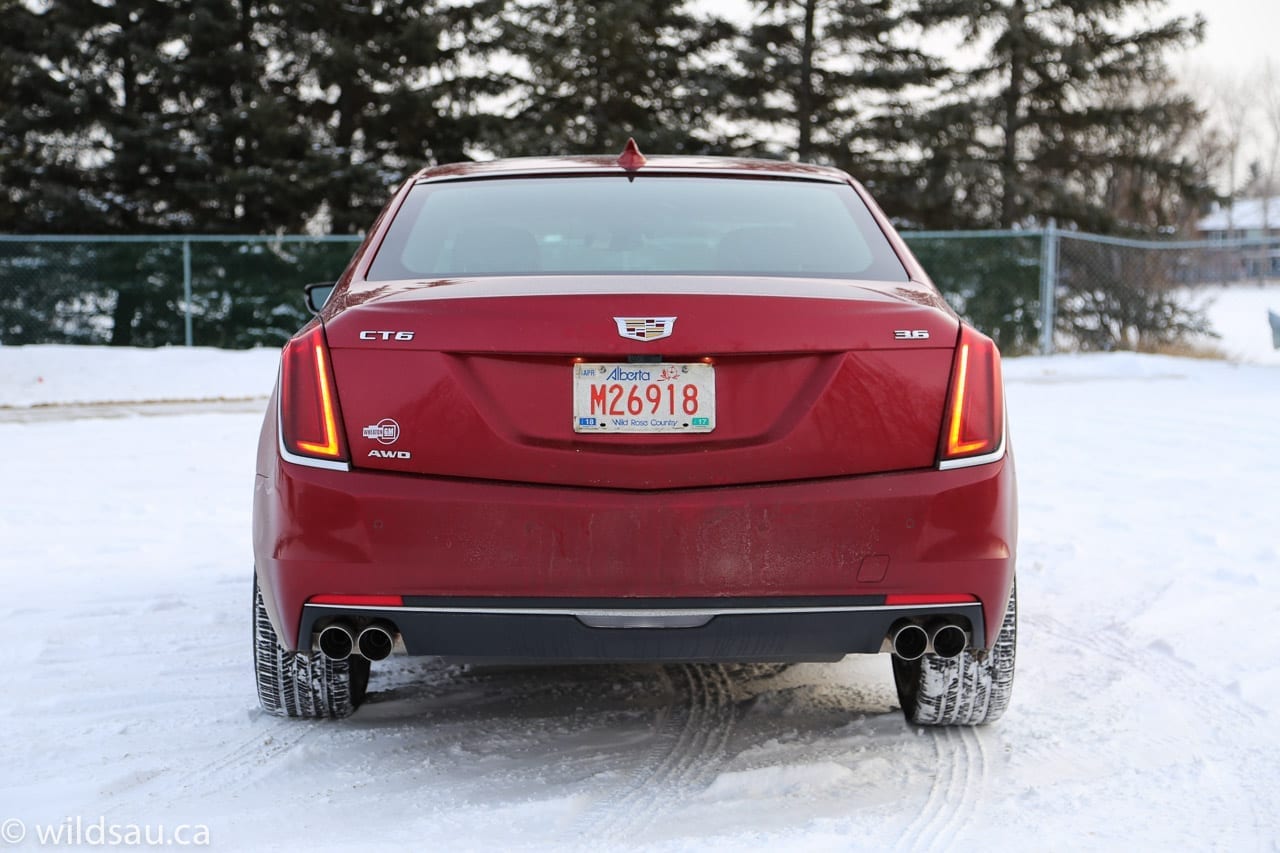